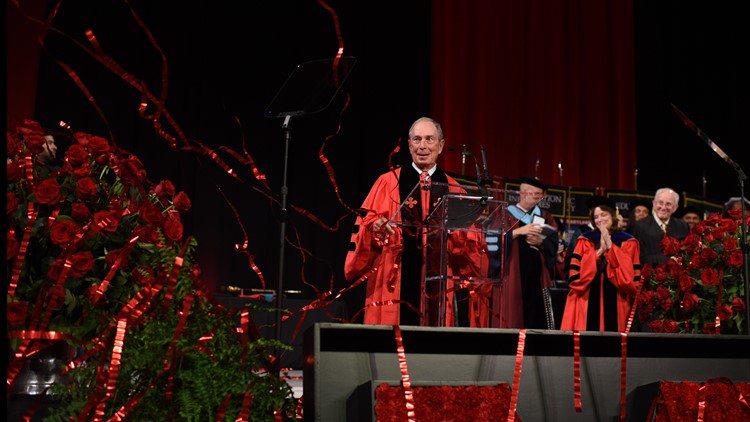 Photo by: UMD
Bloomberg speaks at UMD commencement on May 24, 2019.

The money is slated, university officials said in a release, to go towards evaluating and analyzing current U.S. greenhouse gas emissions reductions.

Bloomberg will submit the findings to the United Nations as a measure of progress for the U.S. in meeting carbon reduction commitments under the Paris Climate Agreement, according to a release.

The report will be led by UMD's Center for Global Sustainability in partnership with the Rocky Mountain Institute (RMI).

UMD took part in a similar report last year and determined reducing emissions started from the ground up, so to speak.

"Bottom-up climate leadership from states, cities, businesses, and universities is where the action is today,” Robert Orr, dean of the School of Public Policy, said in a statement.

Their report last year said "subnational actors" - like states, cities, etc. - have the potential to reduce emissions by more than 24 percent below 2005 levels by 2025. That would bring the U.S. within striking distance of its 26 percent target, school officials said.

This year's report is slated to update those earlier estimates and give a more "comprehensive analysis of subnational potential in the U.S."

Bloomberg's announcement comes on the heels of Robert F. Smith, philanthropist and investor, announcing at Morehouse's commencement he planned to pay off all their student debt. A school official said that gift amounted to about $40 million.