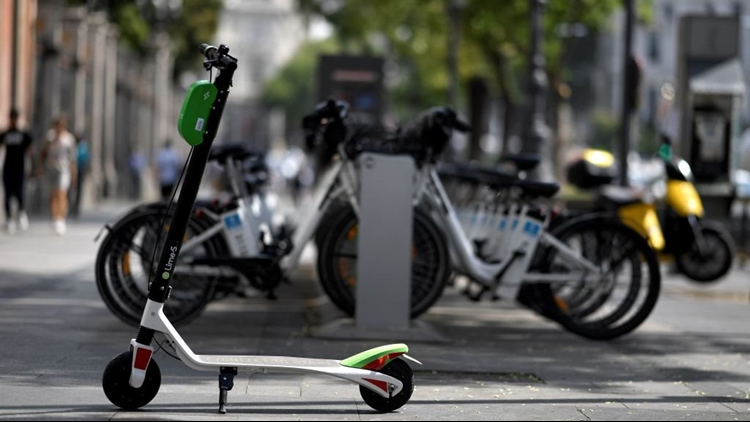 WASHINGTON, D.C. -- The District’s dockless electric scooter services, currently locked in a five-way battle for micromobility supremacy, say they’ll continue service throughout winter months as long as conditions aren’t hazardous – or at least as long as people keep riding them.

As of Friday, Ford Motor Company-owned Spin became the latest electric scooter provider in the city. The company deployed 100 units initially, and says it plans to increase its D.C. fleet size by 50 scooters per week. It hopes to hit the District’s cap of 400 units by the end of December.

A day earlier, the metro saw its first snowfall of the season, with parts of the region seeing anywhere from 1” – 3” inches of snow. The WUSA9 weather team reports it was the earliest measurable snowfall at the Reagan National Airport observation site in 22 years.

What does that mean for the city’s approximately 1,700 dockless electric scooters and their riders? For the most part, they say they plan to keep the scooters running as long as the ridership is there. And according to Lime general manager Sean Arroyo, despite dropping temperatures, usage has remained high.

“(Lime’s) policy is different from region to region,” Arroyo said. “People deal with temperatures in different ways. So far, D.C. has actually faired very well in the cold. This is obviously our first big winter with scooters. As of right now we had a 19-degree day and we still maintained high ridership.”

WUSA9 asked each of the five companies operating dockless scooters in the District about their specific winter-weather policies. Find their answers below:

"Bird is extremely committed to the safety of our riders, and so we take into account the weather conditions of each city where Bird is available. We have a team dedicated to closely monitoring all conditions, and they adjust our operations accordingly. This includes pausing our service when weather does not permit safe riding, and can sometimes lead to removing Birds from the road during periods of inclement weather caused by storms or hurricanes."

In a follow-up email, a Bird spokeswoman said the company makes case-by-case determinations on when to recall the entire fleet in case of extreme temperatures or snowfall levels.

Arroyo said Lime, with exception for heavy sleet and snow or other extreme weather conditions, leaves service up to riders: “If people are still riding, we’re going to keep the fleet out.”

“There are certain communities in Baltimore and D.C., for example, where people rely on this service to get to-and-from work, and it would be a disservice to them to pull these off the streets. So we’re going to continue to provide service as long as we can.”

"Our scooters will be available, weather permitting, all year round. In cases of adverse weather that could make riding a scooter unsafe, we may choose to not deploy scooters or collect scooters mid-day. Scooter availability will be shown in the Lyft app.”

“Scooters, like all modes of transit, require extra caution in snowy weather, especially when roads are slick. Given [Thursday]’s conditions, we have paused service. We will resume service as soon as weather permits, which could be as early as [Friday] morning. Our policy is to make weather-related deployment decisions on a case by case basis, taking into account the forecast, conditions on the ground, and public familiarity with scooters. In changing weather conditions, our protocol is to evaluate deployment decisions hourly. We value our partnership with DDOT and will continue to take precautions to always put our riders safety first.”

“Every morning we monitor the street conditions, including inches of snow and ice levels. We won't put scooters out if the temperature falls below freezing or if there is ice on the streets. In close coordination with the government, we'll make decisions on a day-by-day basis.”

“We still believe that scooters and other forms of micromobility will see usage in cold months, and look forward to analyzing usage and ridership to understand where deployment has the most impact.”