The goal is to force people to acknowledge the magnitude of the climate change problem by disrupting "business as usual." 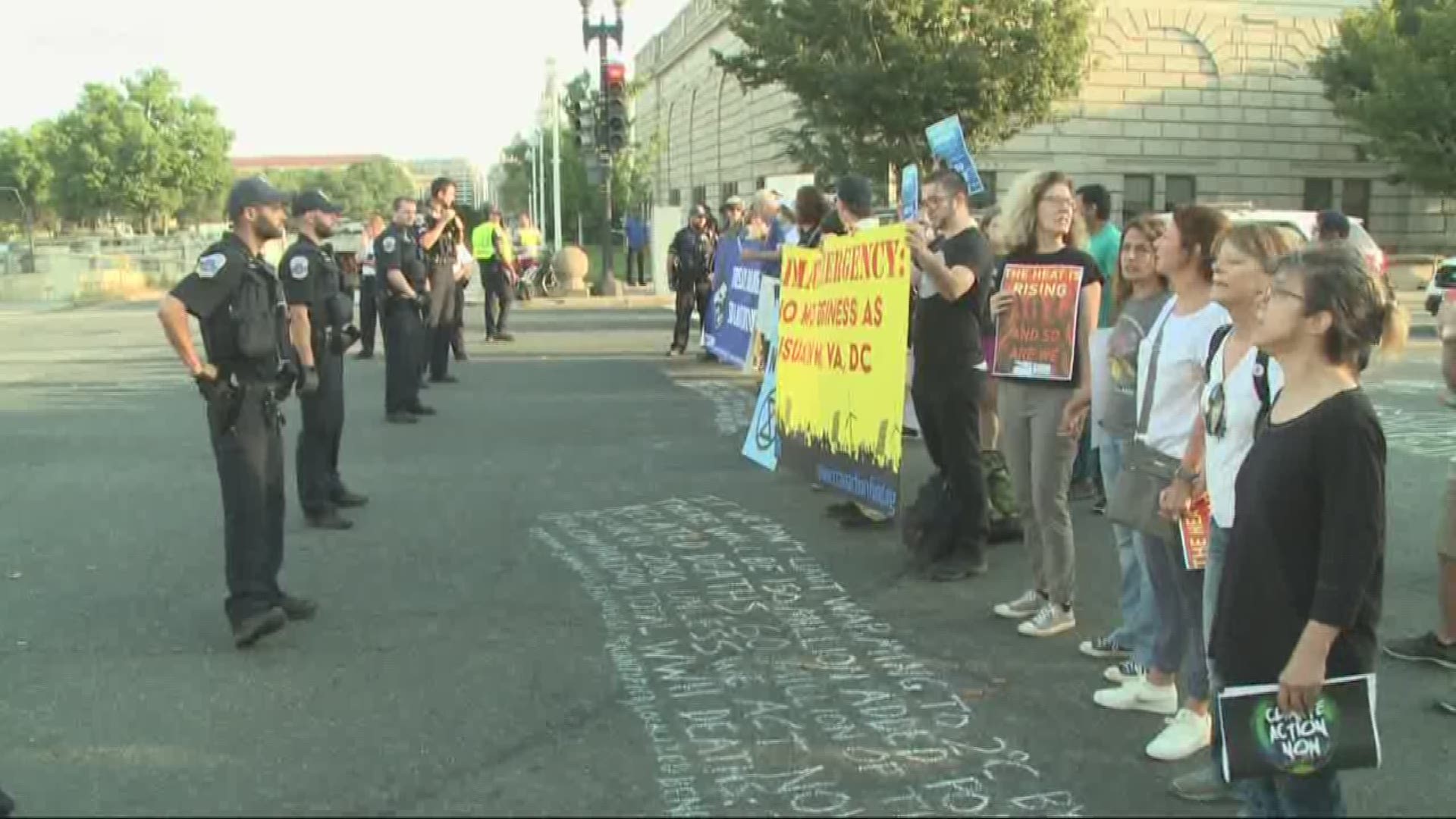 According the U.S. Capitol Police, six people were arrested on Independence and Washington Avenues in Southwest. D.C. police said the arrested 26 people in connection to the climate change protest.

The following intersections were closed as a result of heavy protest activity:

Protesters said the goal is to force people to acknowledge the magnitude of the climate change problem by disrupting "business as usual."

At North Capitol and Massachusetts Avenue, WUSA9 crews followed protesters as they began to march and chant down the street. Protesters are riding bikes and carrying signs. At one point, they were chanting, "We don't want to die."

"We are in a climate emergency, one protester said. "We need to pass the climate green new deal."

Climate change protesters chained themselves to a boat at the intersection of 16th and K NW.

Police closed the intersection of 12th Street and Independence Avenue. Protesters gathered and started chanting as police stood by. On a loud speaker, one protester would say a city is on fire and then the other protesters would respond, "put the fire out."

“We hope with by our actions on Monday, we can raise public awareness of this issue and understand it’s just not going to be taken as business as usual, that we need some drastic action on climate change issues in the relatively near future," said a spokesman for Shut Down D.C., Mike Golash.

At a final training session Sunday, organizers said that each group has a different tactic.

They said they range from hosting a queer dance party to building a pipeline, to disabling cars at a stoplight.

Black Lives Matter D.C. said they're going to take the opportunity to educate and help the community, so nurses will be giving free health screenings at their demonstration in Southeast.

Organizers said many of the protesters are prepared to go to jail before they'll get out of the street.

D.C. Police said in a statement that they are prepared for Monday's event:

"MPD is aware of the assembly. In regards to public safety planning, MPD does not discuss operational tactics; however, our Special Operations Division is equipped to handle First Amendment assemblies of any stature. MPD would also like to advise the public to remain vigilant, and if you see something, say something."

When it comes to First Amendment demonstrations in general, D.C. Police policy is pretty simple.

People have the right to protest, but "reasonable restrictions" are in place to make sure everyone stays safe.

"...to protect public safety, persons, and property, and to accommodate the interest of persons not participating in the assemblies to use the streets, sidewalks, and other public ways to travel to their intended destinations, and use the parks for recreational purposes. It is the statutory responsibility of the MPD to preserve the public peace, to prevent crime, arrest offenders, and to protect the rights of persons and their property."

Not even the protesters know if the shut down will last through the evening commute. They said it could depend on whether or not police end up making mass arrests. 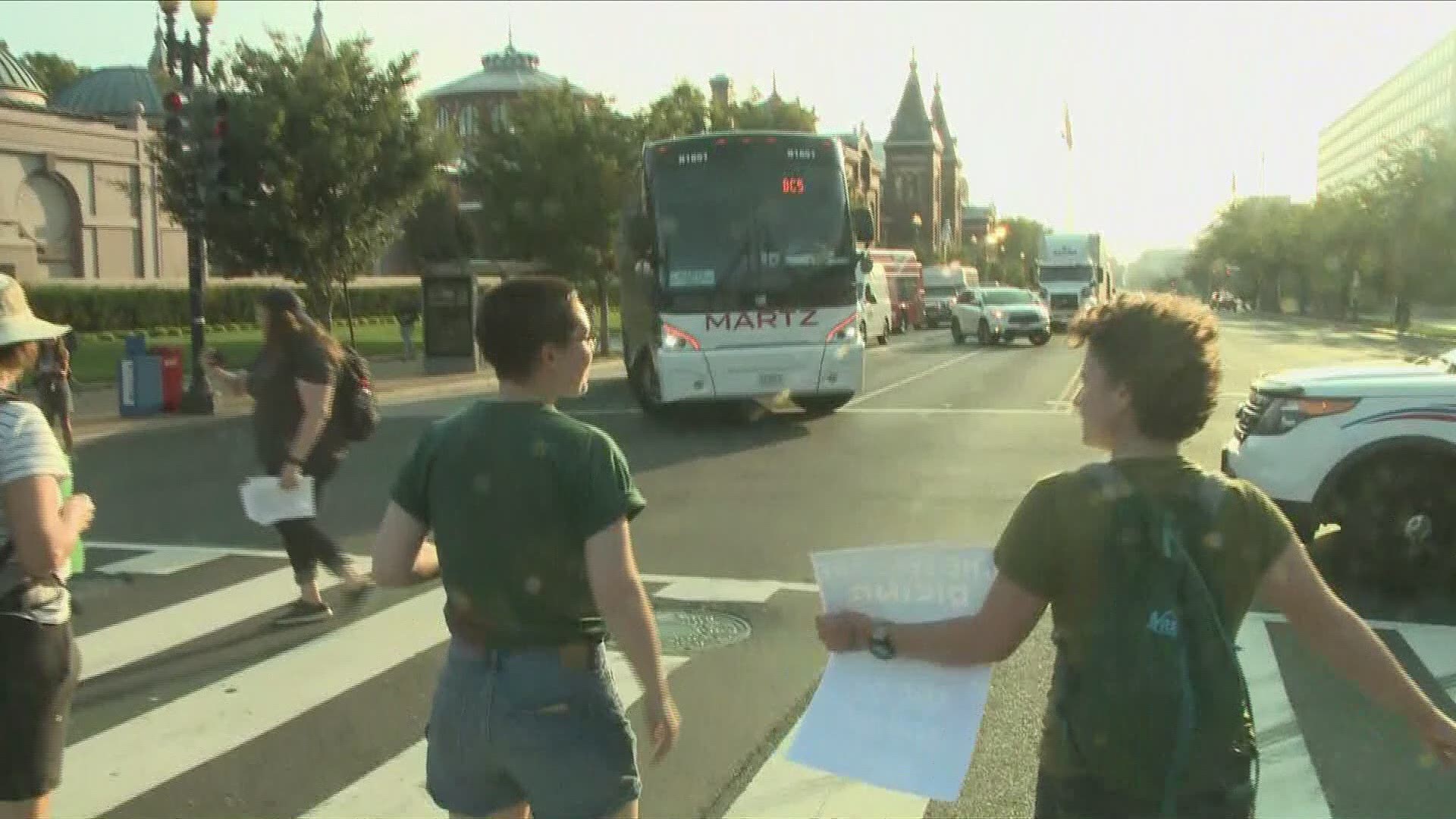 There are multiple ways to stay up to date throughout the day.

You can sign up for text alerts directly from Shut Down D.C. by texting StrikeDC to 88202.

You can also sign up for free text or email alerts from District officials through AlertDC, the District’s emergency communications system via alertdc.dc.gov.