Splits: The science of why they can't be forced

When sports medicine doctor Nathan Yokel watched the now viral video of cheerleading students being forced into the splits, he cringed. 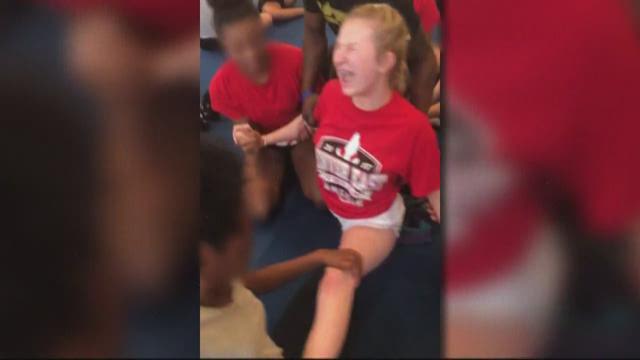 When sports medicine doctor Nathan Yokel watched the now viral video of cheerleading students being forced into the splits, he cringed.

“It’s horrifying to watch,: he said.

Yokel said these methods are old school, part of the "no pain no gain" mentality of sports training. He said it’s not based on science and it doesn’t work.

“I think the key thing is warming up first and easing into stretches within a comfortable range finding where your limit is and then maybe easing a few degrees more. But not really bouncing aggressively into something: slow gentle consistent stretches are more effective," he said.

Yokel said forcing the stretch, and worse, having someone else force it on you, is asking for an injury that could do permanent damage. And while pain is one way of gauging the limits of our flexibility, it isn’t always a perfect guide.

“When you think about all structures around your hip involved in doing a split, we have your muscles, we have your thigh and pelvis we have the tendon," he said. “Some of these areas have more sensation than others and you may not necessarily feel it in that moment.”

For some, no amount of stretching will ever give you prima ballerina lines, thanks to genes, the shape of the pelvis, or previous injuries.

"A good portion of people, if they spend the time stretching and working on it consistently with some kind of guidance can get a lot more flexibility to include doing the splits," he said. "But there is a proportion of people who will probably never get there."

For those who are capable it will probably take weeks, if not years, of patient stretching.