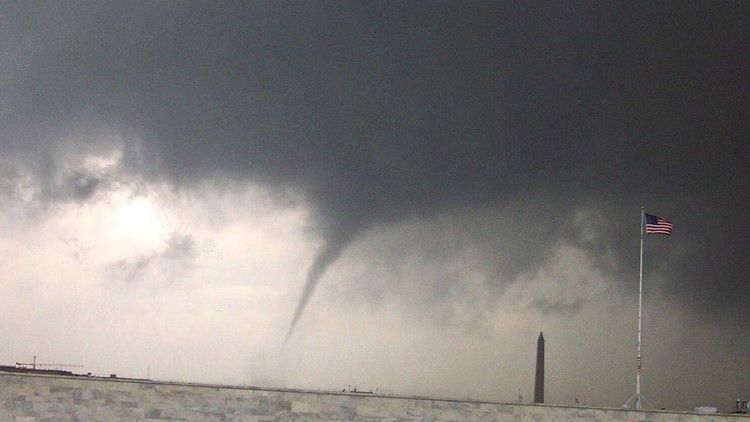 Only 3 serious tornadoes have hit DC in the past 50 years. 2 were on the same day

WASHINGTON -- On Thursday, Washington, D.C., itself fell under a tornado warning – a relatively rare occurrence for the capital city. The warning ultimately cleared without any tornadoes being reported.

According to data from the National Weather Service Storm Prediction Center and the Midwestern Regional Climate Center, only three tornadoes above an F0 magnitude have touched down inside the boundaries of Washington, D.C., in the past 50 years – and two of them happened on the same day in 2001.

On Sept. 24, 2001, three tornadoes touched ground in D.C. – marking the single most active day of tornadic activity in at least half a century.

The weakest of them, an F0 – meaning a tornado with winds not exceeding 73 miles per hour – crossed the 14th Street bridge and traveled approximately 2 miles before dissipating near the Capital. No injuries were reported.

At the same time, an F1 tornado that touched down near Lorton, Virginia, traveled for approximately 14 miles northeast into D.C. – ending near the Shaw neighborhood. Spotters estimated the tornado was 100 yards wide. Two injuries were reported.

The most powerful tornado to touch down that day – and in D.C. in the past 50 years – was an F3 with wind speeds ranging between 158-206 miles per hour. The tornado started near the Brookland neighborhood in northern D.C. and traveled for more than 17 miles, finally ending northeast of Columbia, Maryland. The approximately 200-yard wide tornado injured 55 people and killed two others.

Explore the map below from the Midwestern Regional Climate Center to see tornado data from 1950-2017 for the entire country:

All told, a total of nine tornadoes touched down in the greater D.C. area during the Sept. 24, 2001, outbreak, causing 57 injuries and two fatalities. The most powerful was an F4 tornado that traveled for 10 miles through Culpeper and Fauquier counties in Virginia. The damage total of the entire outbreak was estimated at more than $100 million.

In addition to the September 2001 tornado outbreak, a handful of other weaker tornadoes have either touched down or entered the city in the past 50 years:

The most significant tornado to ever hit Washington, D.C., came on August 25, 1814, as British troops were burning the city during the War of 1812.

While the city was burning, a massive storm – which may have included both a hurricane and a tornado – hit the city. During the storm, a tornado traveled down Constitution Avenue and reportedly threw multiple canons through the air. At least 30 people were killed in the storm, which caused serious damage to structures in D.C. – including some the British had not burned. The storm did, however, have the effect of helping to douse the fires set by British troops.