'Not another statistic': Speaker Zion Kelly inspired by March for Our Lives

17-year-old Zion Kelly bravely stood in front of thousands of people at the Saturday March for Our Lives and shared the painful story of losing his brother. 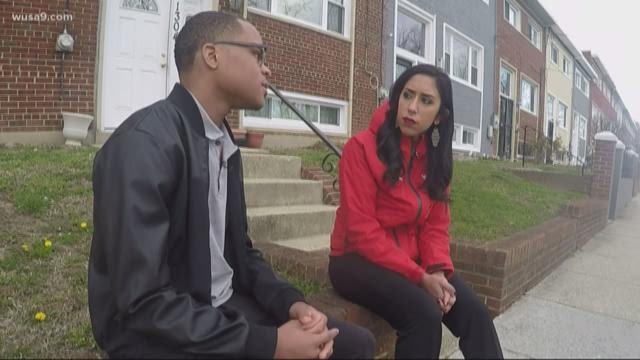 It wasn't any easier for the teen to share his story on Sunday. Still young man who moved thousands at the March for Our Lives sat down with WUSA 9.

“For me, I just think about it as I don't want my brother's name to die and I don't want his name to go in vain. So, I just keep pushing,” said 17-year-old Zion Kelly outside of his home, “My story is similar to so many other people's stories around the nation...guns have been a huge issue in our communities."

Kelly’s community is Northeast Washington D.C. The 17-year-old lives just steps away from where his brother was killed last September.

Sunday, Kelly told WUSA 9 he found comfort and felt empowered by the march. The exact moment was when he asked those in the crowd to raise their hand if they were affected by gun violence. He called that moment humbling.

"Can you imagine how it would be to lose someone that close to you. Sadly, too many of my friends and peers can,” he said in the Saturday speech as he choked-back tears. At the massive march, Kelly told the crowd he did not want his brother to be another statistic.

His twin, Zaire Kelly (16-years-old at the time) was on his way home from a college prep course when he was shot. Kelly was a star student and athlete at Thurgood Marshall Academy in Southeast. The assailant was reportedly wearing ankle bracelet for a previous crime.

"He was still able to attain a gun illegally, lurking the streets,” Zion Kelly said at the march.

In DC, police crime stats say assaults by dangerous weapons went down 18% from last year to 2016, but the number of firearms recovered last year, was the highest in six years. The number of guns recovered in 2017 is 2,191.

The ATF also keeps gun recovery records. Not all are from crimes, but their latest map says most of the guns recovered in DC in 2016, came from Maryland and Virginia. Those numbers were 227 and 494 guns recovered respectively. In the District, the ATF recovered 54 guns.

"I always walk to walk past just to honor him and remember that he took his last breaths right there,” said Kelly.

He’s not hiding from the pain.

After the March for Our Lives, the big question is can students turn that march into action?

The family wants to create safe passage areas for students going to and from school and after school activities. They also want to extend “Gun Free Zones.” These areas increase the penalties if you're caught illegally with a firearm in one.