Museum of the Bible opens in DC today

"...No other book has had the impact on civilization, particularly Western civilization," said the Executive Director of the D.C.'s latest museum, the Museum of the Bible. 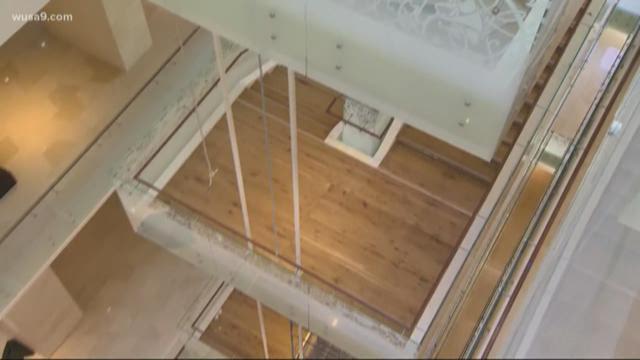 A new museum is opening Friday in the Nation’s Capital. It’s called the Museum of the Bible.

The project took around five years and features six floors of exhibitions. It also includes 1,000 artifacts that trace the history of the Bible.

Recently, there's been some questions over those artifacts. Some scholars accuse the museum of smuggling antiquities and forgeries. Some critics also say this new museum is basically meant to convert people.

"I think it's kind of like a movie reviewer that gives you a review you the movie,’ said Steve Green, the museum’s Board Chairman and President of Hobby Lobby.

He answered this to one criticism while skirting the questions of smuggling and Hobby Lobby’s impact on the Supreme Court and Birth Control health care coverage.

Tuesday Green kept the focus one of D.C.'s latest – we’re talking about $500 million museum dedicated to one book, the Bible.

So what if you're an Atheist or non-believer?

"Oh,” said Executive Director, Tony Zeiss, “We -- remember, we say we invite all people to engage with the bible. That includes those who are faithful, those who aren't. Those who are questioning. We want them to come and look. It's an amazing book. No other book has had the impact on civilization, particularly Western civilization.”

They where 'oh’s’ and ‘ah’s” heard inside the museum (around $42 million was spent on just technology alone). The artifacts involved include controversial antiquities as-well-as various versions of the Bible. One of the Bibles showcased belongs to William Bradford, who came over on the Mayflower.

The museum highlights stories of the Bible and most importantly to is Board of Directors, it's impact. In American, that includes the Bible's impact on everything from settlement of the New World to slavery, Civil Rights, even modern day pop-culture. Yes, even Kanye West is pictured in the museum.

Some of the biggest takeaways: are how interactive the exhibits are. You walk through electronic waves, meant to symbolize Moses leading his people to freedom after the Red Sea is parted, according to the Bible.

“We were aiming to get it right. You know, the Bible’s had an amazing impact on the world and we try to tell that story,” said Byron Johnson, a scholar at Baylor University. He’s one of the many scholars who spent the past three years working-on and critiquing the museum’s exhibits.

The dedication of the museum is on Friday. The Museum opens on to the general public on Saturday. Tickets are free, but they are timed just like at the Smithsonian’s African American Museum of History and Culture.