A 9-day sit-in at Howard University has come to an end after negotiations ended in a settlement between students and administration. 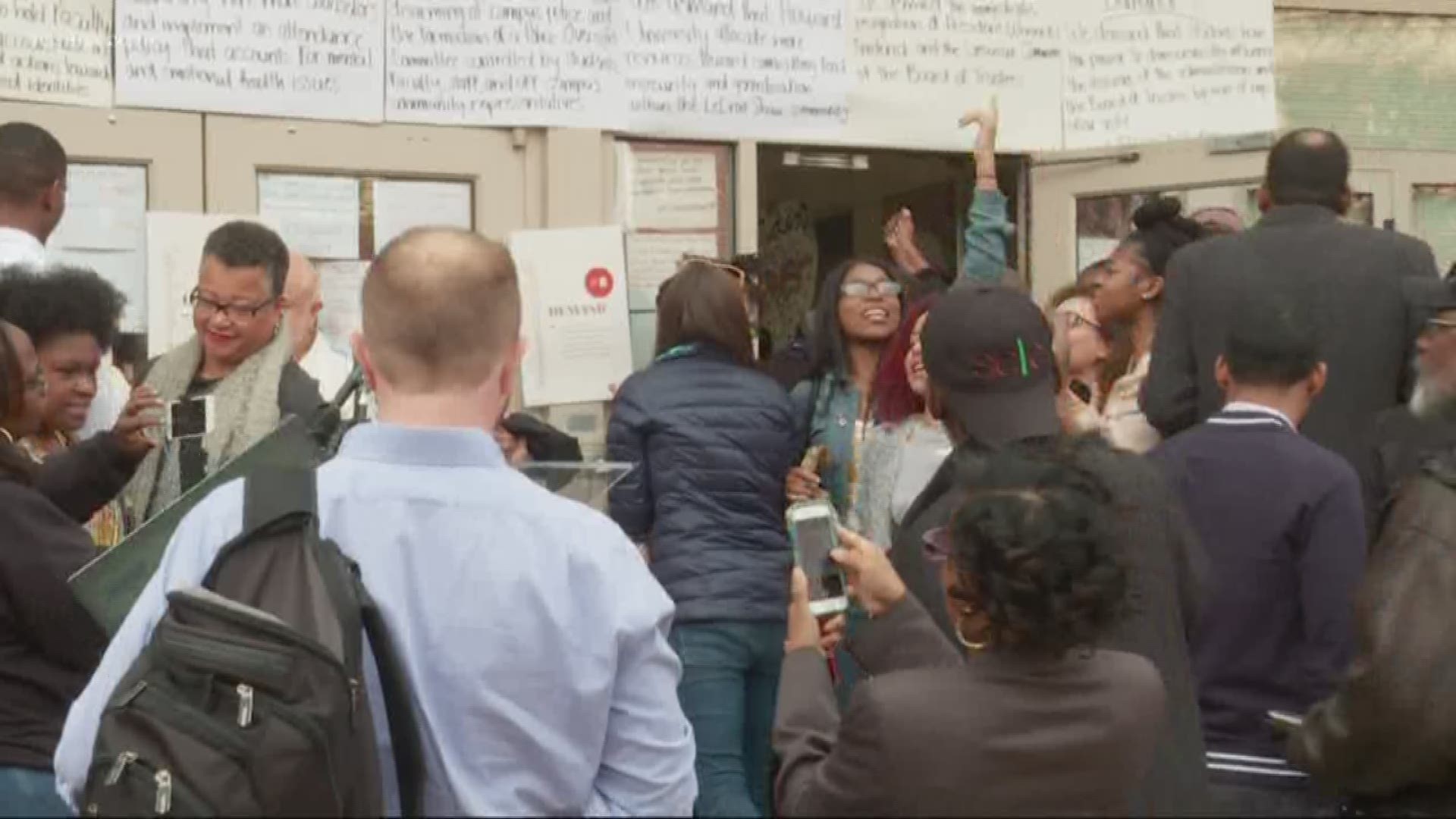 WASHINGTON (WUSA9) — A 9-day sit-in at Howard University has come to an end after negotiations ended in a settlement between students and administration.

HU student Alexis McKenney says #HowardUniversity's Admin Building is back open. The sit in is over. She's thanking students for their support. (@wusa9) pic.twitter.com/sIQDlit7Bi

Howard University’s president Wayne Frederick , the board of trustees and student representatives gathered to speak at the administration building, where the sit-in has been taking place, to present their settlement in response to student demands. Negotiations have been taking place between students and the board for days.

The school listed several commitments, including moving the housing deposit deadline to May 1, establishing task forces to address mental health and sexual assault on campus, and assessing public safety and student relationships with Howard University police, among other commitments.

The student group HU Resist led the sit-in and issued several demands, which included disarming campus police, adequate housing for students under 21, as well as the resignation of the university president.

Over the 9 days of the sit-in, student leaders and administration met to discuss these demands.

On Friday, HU Resist tweeted that they’re softening their stance on the removal of the president. In a tweet, they said they are going to "recenter our cause around the overall improvement of our institution instead of the elimination of one figure."

At the press conference on Friday, Frederick spoke alongside student leaders, reaffirming his commitment to addressing student concerns. "This is a beginning of a process, not just of reconciliation and healing, but of how we move forward," he said.

The sit-in made history as the longest student sit-in at Howard University and mirrored protests by students in 1968.

Throughout the protest, student leaders have reaffirmed, too, that they've been protesting out of a love for their school.

"In 1968, they called for a black university...50 years later, we are calling for that same black university...we're building a new Howard, we're doing this out of love for Howard," said Oliver Robinson on Friday, a student and organizer for HU Resist.

The full Statement of Commitments is below:

• The deadline for submitting the institution’s $200 housing deposit was extended to May 1, 2018. A community wide announcement of the extension was already shared on April 1, 2018.

• If the housing deadline extension results in a significant number of students requesting on- campus housing, the Quad renovation will be delayed to accommodate additional occupancy.

• Howard will engage students in examining the adequacy of on-campus housing to meet Howard’s housing policy that states: “All Howard University first year (0 or 1 completed semesters of post- high school education) and second year (2 or 3 completed semesters of post-high school education) students under the age of 21 will be required to live on campus, unless living at home with a parent or guardian,” and measure against bed availability.

• Students will have a voice in selecting the student ombudsperson. The ombudsperson will be a graduate student who will be located in the Blackburn Center, and will report to the VP for Student Affairs and is expected to attend the Board Student Life and Affairs Committee meetings to make reports.

• The health and well-being of our community is of critical importance, and the Board and administration want to be supportive of the well-being of our students. Howard will implement the Proposal for a Joint Student-Administration Task Force to Enhance Psychiatric and Behavioral Health Services, dated April 1, 2018. Counseling provided under this Proposal will place emphasis on helping students overcome the anxiety of reporting sexual violence to the authorities. The Task Force will be co-chaired by a student and review the process for intake and will report to the Vice President for Student Affairs.

• The Board recognizes the cost of tuition is an area of utmost importance to the entire Howard community. Howard will commit to making a recommendation to the Board to consider holding undergraduate tuition at current levels for the academic year 2019-20 while working with the Tuition Rates and Fees Committee, which already includes student representation, to assess tuition and fees for academic year 2020-21. As part of this process, the University will make comparative data used to inform its decisions available to the student body.

• While Howard’s goal has always been to ensure the safety of our campus community, a separate task force, co-chaired by a student, will be created to undertake a comprehensive review of the Howard Department of Public Safety, focusing on its engagement with the Howard student body, the use of force, training and whether there is a need for armed officers. The task force shall be represented by administration, faculty and student stakeholders, will include experts in criminal justice, and will set forth the process and timeline for its work. The task force will be established by July 1, 2018.

• The Board agrees to establish a task force, co-chaired by a student, with representation from the Howard student body and Howard administration to review existing grievance mechanisms at the University, and best practices at other universities, and establishing a grievance system that holds faculty, administrators and students accountable in their language and actions towards anyone in the Howard community. Any inappropriate behavior goes against Howard’s core values and will not be tolerated by the Howard community. Howard will maintain the existing anonymous hotline as a channel to report such grievances. Professors will be reminded of their obligations to advise students of how to avail themselves of the grievance process for questioning grades.

• The Board is committed to fostering and maintaining an academic and living environment that is free of sexual assault, sexual harassment, and other forms of interpersonal violence. As part of our commitment, we recently thoroughly assessed our Title IX policies and processes, gathered student, faculty and staff feedback during this process, and unveiled last year a new interim Title IX Policy on Prohibited Sexual and Gender-Based Harassment. To further support this critical area for our campus community, a task force, co-chaired by a student, will be established with representation from the Howard student body, faculty and administration for the purpose of examining the current climate on Howard’s campus around sexual assault, sexual harassment and interpersonal violence and providing feedback to the administration on changes in policy and process as appropriate to improve student safety and prevent sexual assault, sexual harassment and interpersonal violence. Included in the scope of work of the task force, working with the Office of the Provost, is consideration of instituting a mandatory 1-credit course with a curriculum designed to emphasize prevention of sexual assault, sexual harassment and interpersonal violence. Every reasonable action will be taken to start up the task force so that it can begin its work before April 30, 2018. For the sake of clarity, the proposal to establish Howard University Hospital as a site for rape kit examinations of victims of sexual assault is a matter of local law and is not part of this commitment. The University will provide transportation to sexual assault victims to Washington Hospital Center, the location where rape kit examinations are administered.

• Howard will support a student-led effort to establish a food pantry in the LeDroit-Shaw community and will allocate money for that purpose. Student volunteer involvement in service to, and fundraising for, the food pantry will be encouraged. Students are commended for the concern shown for the greater LeDroit-Shaw community and at Howard, we always want to be good community stewards. A plan for the food pantry will be submitted by students to the VP for External Affairs by June 1, 2018. While the University has a long history of commitment to and involvement in the community, the University will consider by June 1, 2019 the establishment of a community development organization which might allow for more inclusive community engagement on select real estate projects where no contractual obligations currently exist (not involving existing real estate holdings or immediate core development opportunities). The University’s Ethics Policy requires that it comply with “the requirements of [all] laws.” As a party to eight collective bargaining agreements, the University is subject to the National Labor Relations Act relating to fair labor practices. The University will continue to draw on the resources of the School of Law’s Fair Housing Clinic to assist members of the community.

• Subject to approval of the Board Governance Committee, a Board Committee on Student Life and Affairs will be established on which trustees, including student trustees, the President of HUSA and other appropriate stakeholders, will engage with the student body, providing a forum to convey concerns regarding all aspects of student life to the Board as needed. The Howard administration will create more opportunities for dialogue with students and the Committee will establish a mechanism for such engagement.