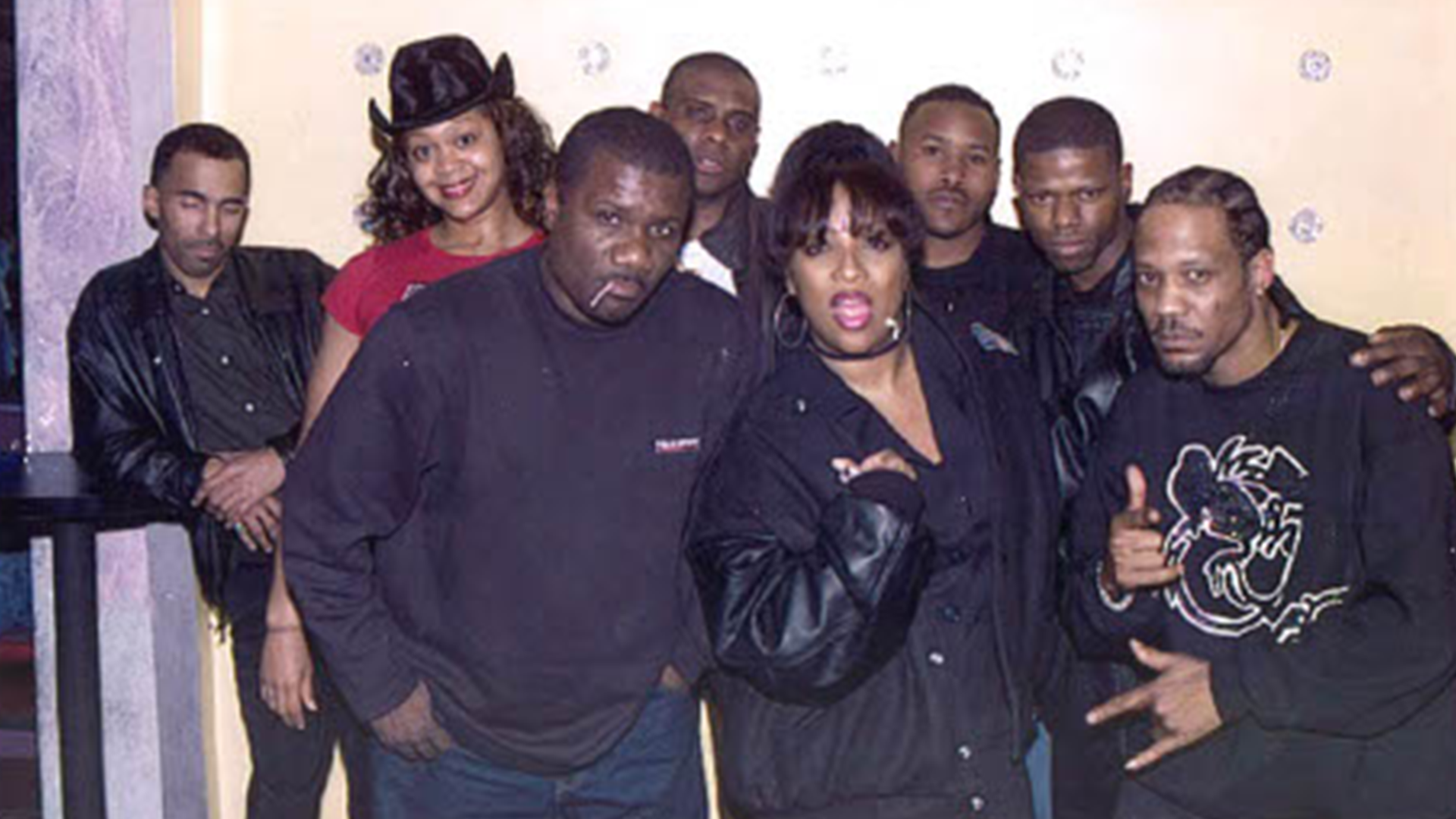 WASHINGTON — If Chuck Brown is the godfather of go-go music, Maiesha Rashad is its first leading lady.

During the 90's in D.C., Rashad led a band of bell-bottom and afro-wearing musicians. They called themselves Maiesha Rashad and the Hip Huggers.

In February, Rashad was diagnosed with stage 4 stomach cancer. She’s currently in Suburban Hospital receiving chemotherapy treatments. She was too weak to talk with WUSA9, but her family, friends and other go-go legends spoke with our Ariane Datil.

Each picked a location that reminds them of their unique relationship with Rashad. Together they wanted to celebrate the first lady of go-go and her immutable legacy.

In front of the bay window at Takoma Station in Northwest D.C., in the middle of what used to be the music venue’s main stage, go-go legend Gregory "Sugar Bear" Eliot, lead singer of EU Experience Unlimited, shared the story of how he and Rashad first met.

It had to be fate.

Credit: WUSA9
Maiesha Rashad and the Hip Huggers were go-go rock stars during the 1990's.

Sugar Bear says Rashad had never heard of him before they played on stage that night.

"Our chemistry was unreal," says Sugar Bear. "It was like we knew each other for 50 years, but we didn’t. I only met her that night when I came up here. That’s amazing ain’t it? It’s like I knew her."

By the time Rashad and Sugar Bear met, he had just completed a world tour for his song "Da Butt," the hit track off of Spike Lee’s movie "School Daze." The song put go-go music on the international map, eventually earning a Grammy nomination.

But even with all of his previous accolades, Sugar Bear credits Rashad for helping him achieve his biggest successes in go-go.

"Go-go was really at a state where nothing was going on, says Sugar Bear. "So when Maiesha came out with The Hip Huggers, I was really glad to be a part of it because you could see it evolve into a phenomenon.”

As Sugar Bear described what it is was like to watch her perform during those days you could see his eyes light up with pride.

"When she sang 'Meet Me on the Moon' or something like that [by] Phyllis Hyman. People were crying. I never have seen anything like that.”

Maiesha and the Hip Huggers performed seven nights a week to pack houses.

Credit: WUSA9
Maiesha Rashad and the Hip Huggers were go-go rock stars during the 1990's.

"Literally we could not stop working because that’s how big it got," says Sugar Bear. "We were performing seven nights a week. From starting right here at Takoma Station.”

He says the audience couldn’t get enough of the grown and sexy go-go that the Hip Huggers made famous.

“When people came to see it, they couldn’t believe it," he said. "This is something totally different. It’s fresh. People could identify with the old school songs that Maiesha was singing.”

Until Rashad hit the go-go scene, going to the go-gos was for a younger crowd, but Rashad found a way to bring the older crowd into the fold.

Credit: WUSA9
Maiesha Rashad wore afros and bell-bottoms while performing with the Hip-Huggers

The Hip Huggers started their sets with old school 70's jams like the Jackson 5’s "I Want You Back" and "Betcha by Golly Wow" and then by the end of the night it was a full-fledged dance party with top 40s hits and EU classics.

"We complemented each other you know," says Sugar Bear. “When Maiesha did her thing, I stayed in the back and just let her do her vocals. And when I got my turn, of course, I brought the party on."

He says each show was like getting two treats for one and that people came back night after night to watch them perform.

"The line [at Takoma Station] was wrapped around almost half of the block, down the street and around the corner," Sugar Bear remembers. "A thick line, not no little skinny line. Remember, you can’t get no more than 300 people here or so. It was unbelievable.”

He says people would stand in line and not even be able to get in or if they did finally get in, they were willing to pay full price just to see the last 20 minutes.

"And I’m honestly proud to say that she was the first one to really get the so-called grown and sexy thing," Sugar Bear said. "It was her. And I don’t think nobody can question that. And of course, other bands tried to emulate what we did, but if it ain’t real you don’t get a thrill.”

While the D.C. go-go scene knows Rashad for her beautiful vocals and amazing stage presence, one young lady knows her for warm hugs and undying love.

"I would come home from school and there would be a whole band set-up in the living room. They would be getting ready for rehearsal and it would be like JuJu, Sugar Bear, Demi Doc, Sheree. Like everybody just in the living room like joining on each other, cuttin’ up, joking – it was a really cool childhood."

Sitting in a recording studio in Maryland, with one of her best friends by her side, Raina Rashad shared what it was like to grow up around the first lady of go-go.

Raina is Rashad’s only child. She remembers falling asleep across two chairs in jazz clubs where her mom performed when she was younger.

She also remembers being in awe of her mom as she cranked on stage with Sugar Bear.

"It was crazy. Literally my mom’s band was playing a big concert, one of the big ones in D.C. where the whole street was just filled with people. And they were headlining it and Destiny’s Child opened for them. And I’m just like wait… Beyonce is opening for my mom’s band. That was pretty crazy," Raina recalled with a big smile on her face.

Now a musician herself, Raina wants to make sure her mom gets the recognition that she feels she deserves as being the first lady of go-go.

RELATED: First-ever Go-Go music museum needs $25,000 to open. Here’s how you can help

"I’m so proud," said Raina. "I‘m proud that my mom was able to have her own band being a woman. That’s not even something that was heard of before her. Girl power. That’s what she was about. That’s what she is about."

On Feb. 6, 2020, when Rashad was diagnosed with stomach cancer, Raina flew home from Los Angeles immediately to be by her side.

"She just said it really lightly," Raina remembers. "She just said I’ve been diagnosed with stage 4 cancer and I can’t even really remember after that."

According to the American Cancer Society, routine screening for stomach cancer is not done in the United States. They say most people with this disease are not diagnosed until the cancer has spread and become terminal.

The National Cancer Institute says the 5-year survival rate for someone with late-stage stomach cancer is just 5%.

But Raina hopes she can defy the odds.

"She’s my best friend so I can’t even imagine what it’s going to be like if she leaves me," she said.

Raina says that her mom is in a lot of pain right now and that the diagnosis has been really difficult for Rashad to accept.

"It’s hard for her right now," said Raina. She’s in a lot of pain. I’m just trying to like be by her side and hold her hand. And whatever she needs, make sure she has it.”

Elijah Joy is like an adopted son to Rashad. He’s been with the family since he was 14-years-old. Joy shared dozens of family photos of Rashad in her many roles: performer, mother, manager and friend.

"When Raina was little, she used to direct the choir along with Maiesha. She’d be instructing the sopranos and the tenors and just mirroring whatever Maiesha did," he said.

Joy says Rashad called him while he was alone at home to tell him about her diagnosis.

"Maiesha called me after her meeting with the doctor. It was just an awful moment,” Joy said.

He found out the same day Raina was flying home from California.

"We just had to sort of, uh, all come together and just be there for Maiesha and be there for Raina," Joy said.

"You know, there has been a diagnosis that the doctor has given us. But we’re believing in God and believing in miracles," Joy said.

Joy went over some of the photos he provided with us, reliving the memories as he did.

"So this is definitely early Hip Huggers days because if you see Sugar Bear or Junie in the afro this is like the early days,” Joy said, pointing to an old photo. He says Sugar Bear and Junie were less into the fashion and stopped wearing the afros at some point. "At the beginning of Hip Huggers it was very 70's fashion, 70's music, which still stayed the mode, but the boys came less on the fashion.”

Sitting on stage at the historic Howard Theatre in Shaw, go-go artist and manager Michelle Blackwell spoke about how Rashad led the way for other women in go-go, like herself, to not just be lead singers in a band, but to manage bands.

"I feel that I am standing on her shoulders and representing what she started," said Blackwell.

In the mid-90's when Maiesha and the Hip Huggers were on fire in the city, Blackwell was an artist with Chucky Thompson, a music producer with Bad Boy Records. Thompson also worked with the godfather of go-go himself, Chuck Brown.

Blackwell says that without Rashad’s influence, her own career in go-go wouldn’t be what it is today, and the Howard Theatre is a constant reminder of that.

“This building holds a lot of historical significance when it comes to go-go culture in general,” Blackwell said. “This is where I presented Maiesha with the lifetime achievement award in 2015 when I celebrated my 15 years of performing in go-go."

"They dressed up in 70's clothes, wore the afros and the bellbottoms. They were super feminine and super powerful. They just had a presence about them,” Blackwell said.

And when Rashad joined forces with EU, "I mean it was just something that the go-go scene had never seen before and she was a huge reason why,” Blackwell said.

"I call her queen all the time. I mean she’s… you know… a queen of this culture. And has always carried herself that way," Blackwell said.

Right now, her family says that Rashad’s still in the hospital getting treatment. While they used to visit her daily, the coronavirus pandemic has restricted visitation at the hospital so now Rashad is alone. They want to bring her home but need to raise funds to pay for in-home care.

If you’re interested in donating to help Rashad’s family pay for her care, you can visit her GoFundMe.