Congress Heights residents are fed up with 'slumlord'

Washington, D.C. is constantly growing and developing, but a group of tenants in a Southeast, D.C. neighborhood said they do not want it if it costs them their homes. 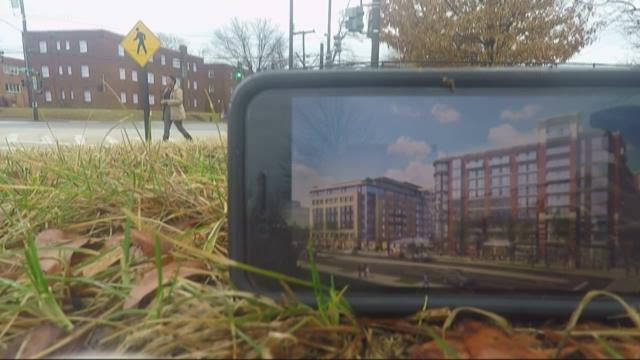 Washington, D.C. is constantly growing and developing, but a group of tenants in a Southeast, D.C. neighborhood said they do not want it if it costs them their homes.

It would take $120,000,000 for the mixed-use development to take over where four buildings already stand in Congress Heights. One is abandoned and owned by the city. The others still have 13 people who live there.

"Slumlord," proclaimed a protester. "They don't want to be affiliated with that so they try to hide."

On Saturday, a large crowd rallied at the Cleveland Park Metro and marched to Geoffrey Griffis's home.

In a statement, Griffis said, "they are venting to the wrong guy. They are upset about the actions of the former landlord at Congress Heights."

Griffis heads the development group, CityPartners, which recently took ownership of the three apartment buildings. They got the properties from Sanford capital.

CityPartners has offered the tenants a few options. They can either temporarily relocate and return to the new buildings once they are built at the expense of CityPartners, take a buyout, or they can become what city partners says is a limited ownership in the project by investing the buyout amount.

The residents are stuck between the two and everyone is pointing fingers.

Ruth Barnwell has lived in her Congress Heights apartment for 35 years. She and the others believe they are being pushed out for offices, apartments and retail shops.

It is a prime location for future endeavors. The apartments are right across the street from the Congress Heights Metro Station, near where the new Wizards practice facility will be.

For now, the people living there say the currently rent-controlled apartments are already barely livable and have been for years.

"Horrific conditions. From bedbugs, water leakage, water filtering into the apartment, no heat in the winter time, no air in the summer," just a few issues that Barnwell said the tenants have dealt with.

According to the tenants, when CityParners took over, Griffis promised to make repairs.

"Those repairs were never made and in fact conditions got worst at the property," said Attorney Will Merrifield who represents the tenants.

"There are two existing lawsuits. One lawsuit was filed by the Washington legal clinic against Sanford capital. In order to get damages for the conditions that the tenets have been forced to live in. The other the lawsuit was brought by the Attorney General on behalf of the District of Columbia," explained Merrifield.

The Attorney General has sued for the transfer from Sanford Capital to be voided, or CityPartner be ordered to pay money for needed repairs.

The tenants said CityPartners denied them the option to purchase the building through The Tenant Opportunity to Purchase Act. The the residents said they want to buy the building and they say the Attorney General is on their side.

"Leave us alone," exclaimed Barnwell. "Stop trying to push us out. We're trying to get DACD Mayor Bowser so we can build 200 affordable units. Which be great for the Congress Heights area and the homeless."