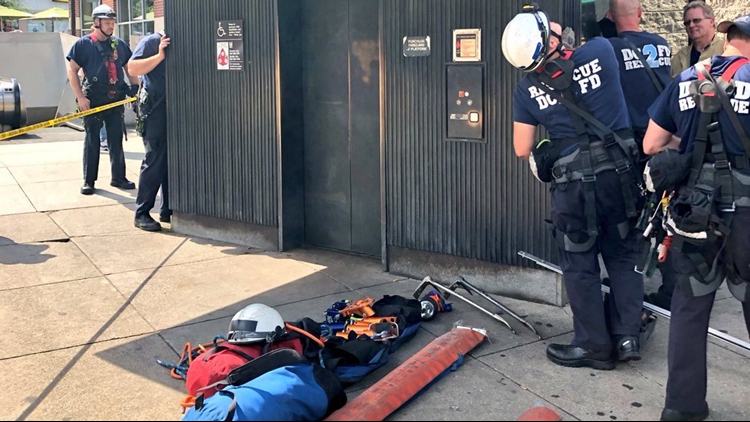 5 people trapped in Tenleytown elevator for 90 minutes on Sunday

WASHINGTON -- Five people were trapped in 40 feet below ground when an elevator at the Tenleytown Metro became stuck on Sunday afternoon.

According to D.C. Fire & EMS, they were trapped for a total of 90 minutes.

One person who said he was stuck, Conor McIlreavy, said the elevator suddenly stopped around 2 p.m. as he and his friends were on their way to the Metro.

Technical Rescue Tenleytown Metro 4200 Wisconsin Ave NW. 5 people were in stalled elevator 40 Ft. below street level and above station level. #DCsBravest Special Ops and other units have successfully removed all 5. All are fine with no medical issues. pic.twitter.com/SDrgXikGnt

For a moment, they weren’t sure what was happening. “We were like, ‘What’s going on?’” McIlreavy said. Then, they realized they were stuck.

According to Vito Maggiolo, spokesperson for D.C. Fire & EMS, they were stuck in a “blind shaft.” Unlike a stopped elevator in a building which tends to be stuck near another floor, this one was suspended between the street and the platform.

To pass the time as emergency responders worked alongside Metro elevator repair specialists, McIlreavy said he and his friends “made it fun.”

“We danced and talked,” he said.

Finally, Fire & EMS was able to manually lift the elevator to street level. According to McIlreavy, this was around 3:40 p.m.

No one was injured or in need of medical assistance.

Maggiolo said that in extreme cases, firefighters will lower themselves on ropes to the stuck elevator and free people. Fortunately, it did not come to that.

Earlier this year, the DC Council introduced a bill to improve elevator safety.