DC council member Jack Evans is once again getting hammered on line for his parking habits. 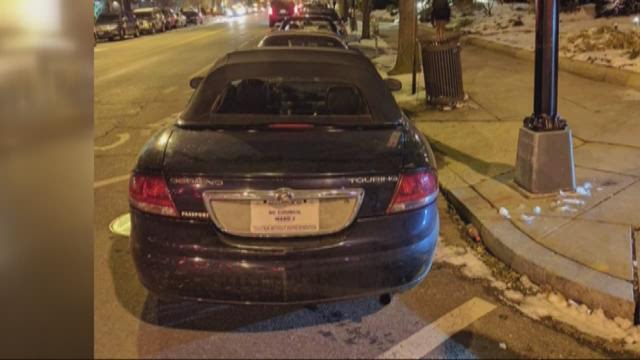 D.C. council member Jack Evans is once again getting hammered on line for his parking habits.

Luchador-11 posted a shot on Reddit of the council member's Chrysler Sebring with his official license plate parked right in the middle of a crosswalk in what looks like downtown D.C..

Not only was Evan's car parked in a crosswalk, it was blocking the curb cut, making it much harder for anyone in a wheelchair who wanted to get by.

Neither Jack Evans nor his staff has offered us any explanation so far for why he had to park there.

But a lot of people had some choice words for him, including disability rights advocate D'Arcee Charington Neal.

Evans has been caught parking illegally for years. The neighborhood blog Popville posted photos of him in 2014 parking in front of a fire hydrant, getting out in a tux, and chomping on a cigar. He apologized for that, and said he didn't realize there was a hydrant.

But when former WUSA9 investigative reporter Russ Ptacek confronted him about parking illegally in 2015, he told Ptacek there were other far more important issues to deal with in the city.