Could a monorail be the answer for I-270? One Montgomery County developer thinks so

Like many in the region, Montgomery County developer Bob Eisinger has become accustomed to long waits on I-270. Unlike many though, he's made it his mission to try and fix the problem. His solution is new: a monorail. 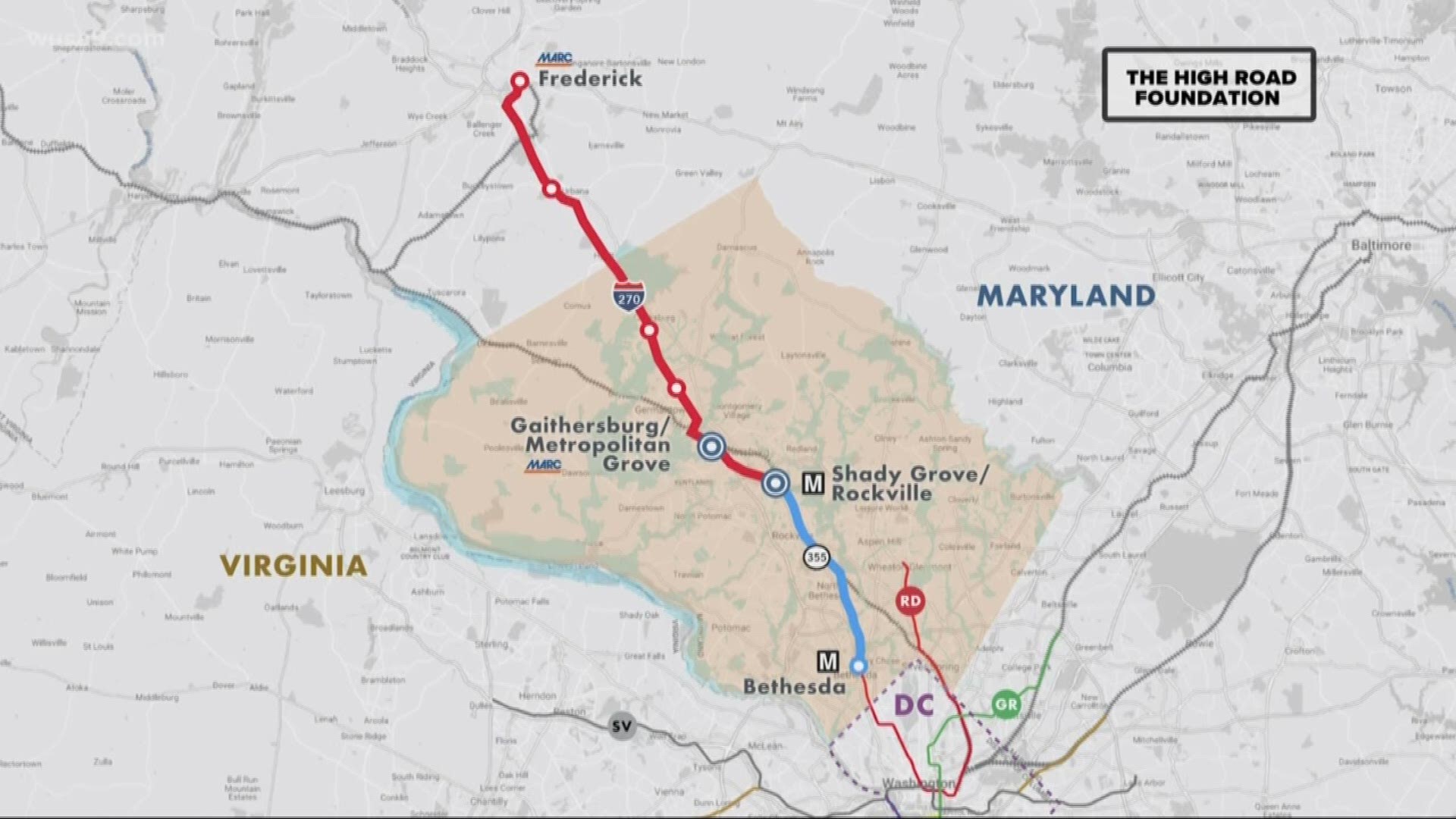 WASHINGTON -- Even at 10 a.m. - hours after rush hour - Bob Eisinger had warnings about Interstate 270.

Like many in the region, Eisinger has become accustomed to long waits on the highway. Unlike many though, he's made it his mission to try and fix the problem.

His solution is new: a monorail.

"We need to start fixing the problems we create," he said. "And not use the same technology we used to create them with."

Although out of the box, the idea is not some half-baked proposition. Eisinger has poured tens-of-thousands of dollars into the proposal, and has gained some powerful allies in the business community and political sphere.

His idea has been generally accepted by mayors across the region, and has intrigued state senators. The proposal has even earned him a sit-down with the transportation secretary of the state on June 4.

"We're feeling good about this," he said.

The monorail would run in between Frederick and Shady Grove, a 27-mile journey, that would be traversed in just 31 minutes, according to Eisinger. Along the way, there would be stops at Urbana, Comsat, Germantown, and Metropolitan Grove.

The project would cost $3.4 billion to construct, an amount Eisinger said is far lower than it would be to expand the Red Line from Shady Grove.

"There's much more bang for your buck," he said. "And it's cheaper at the same time."

The monorail would attract 45,000 trips per day, according to a ridership study done by the foundation. Eisinger said he believes the fares would be more than enough to cover operating costs, making this a viable, self-sustainable system.

A monorail would also require "basically zero" land acquisition, since they can be built along medians of the highway. This is in contrast to any plan for road expansion, which would eat up some private property.

There are examples of monorail systems across the globe, from Osaka Japan, to Sao Paulo, Brazil. And these systems can be massive. In Chongqing China, they have about 1 million trips per day.

But in the U.S., development has been slow, outside of small systems in places like Las Vegas and Seattle.

Examples of Monorail systems across the globe

Eisinger said there's a clear reason that it's been overlooked.

"It's because of the Simpsons cartoon," he said.

He's referring to the classic 1993 episode of the Simpsons, in which a conman came to town selling the townsfolk on a monorail, that would turn out to be a bust.

WUSA9 wanted to hear the response from local lawmakers on the idea, so we reached out to the mayors of Frederick, Rockville, and Gaithersburg, as well as the state senators in every district that holds sections of I-270. WUSA9 also reached out to the governor's office.

Some lawmakers did not respond to our inquiry, but those that sent a statement are listed below.

"MDOT always is open to using the latest technology and innovation to fight congestion. The key for a public-private partnership is that all options must be able to pay for themselves, including the cost of construction, operations and maintenance."

"I met with Bob Eisinger and heard his presentation a couple of months ago. Rockville Mayor Bridget Newton and Frederick Mayor Michael O'Connor were there with me as well.

I'm generally intrigued by this monorail proposal and am very interested to see if, upon deeper study, all of the numbers bear out.

Traffic congestion is a huge problem for the region and it's enormously expensive to make even the slightest improvement, much less solve. As Mr. Eisinger presents it, monorail could provide good 'bang for the buck' while, at the same time, adding a convenient, efficient, and eco-friendly alternative to driving alone in your car.

It's certainly worth studying."

"The concept is very intriguing, and clearly a technology deployed in other countries, and some cities in the US, that can help us deal with our regional transportation challenges. I am supportive of doing the necessary evaluation and study to determine the ridership potential. The early information on cost and environmental impact suggests monorail would measure up very favorably compared to adding asphalt or new rail lines."

“We will never solve our congestion issues unless we use all the tools in our toolbox – and that includes transit as well as roads.  We need to think  long term and what we see for the future of Montgomery County.  I saw the video of the Monorail and I found it intriguing – and I loved the possibility of an off-road hiker/biker trail that ran along the ground under the track from Frederick to Rockville!  Add those potential commuters and think of the health benefits!  MDOT and SHA need to be transparent about ALL the options – and weigh the pros and cons publicly.  Sometimes the most expedient option is not the best long term solution.”

"I met with Mr. Eisinger during this years General Assembly session and was intrigued by his proposal. I sent a letter to Gov. Hogan asking that the monorail be considered as part of their I-270 study. I strongly support Gov. Hogan's proposal to widen I-270 and believe that the state should look into the monorail as a supplement. We need to take an all-of-the-above approach to relieve congestion."

Lawmaker statements will be added to this report, as they are sent.