UMD researchers hope to help the blind 'experience the world'

Faculty and staff at the University of Maryland explored new ways to make it easier for blind people to experience the world around them. 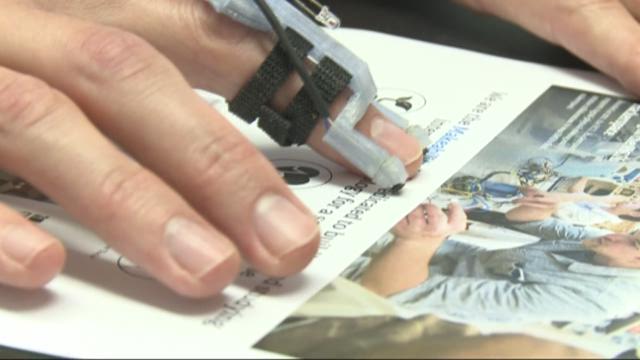 Faculty and staff at the University of Maryland explored new ways to make it easier for blind people to experience the world around them.

The project, based out of UMD's Human Computer Interaction Laboratory, involves a device named HandSight.

The device uses a finger-mounted camera and feedback system to help users read or learn descriptions about the items placed in front of them.

A one millimeter sized camera rests on the fingertip of the user. The camera sees objects placed within its view. It then sends that information back to a processing unit on the user's wrist. After that, the device reads aloud words or a description of whatever the camera is seeing.

Computer Science Assistant Professor Jon Froehlich is a part of the team behind HandSight. He said the purpose of the project is to help users increase their independent living.

"Imagine for example, gliding your finger along printed text and hearing the words spoken back to you," he said.

The device also has haptic feedback, which allows users to sense where a sentence or paragraph may begin or end.

"We're trying to guide your hand once it's on an object," he said.

Froehlich said more than 90 blind and visually impaired people have provided feedback on the project. He said while it is not the type of device you should expect to see in stores soon, it has garnered interest in the tech field.

"We've been contacted by people in industry who are very excited about what we're doing here," he said.