The retail giant has significantly increased its political contributions in Virginia in the year since it announced the state as the home of HQ2. 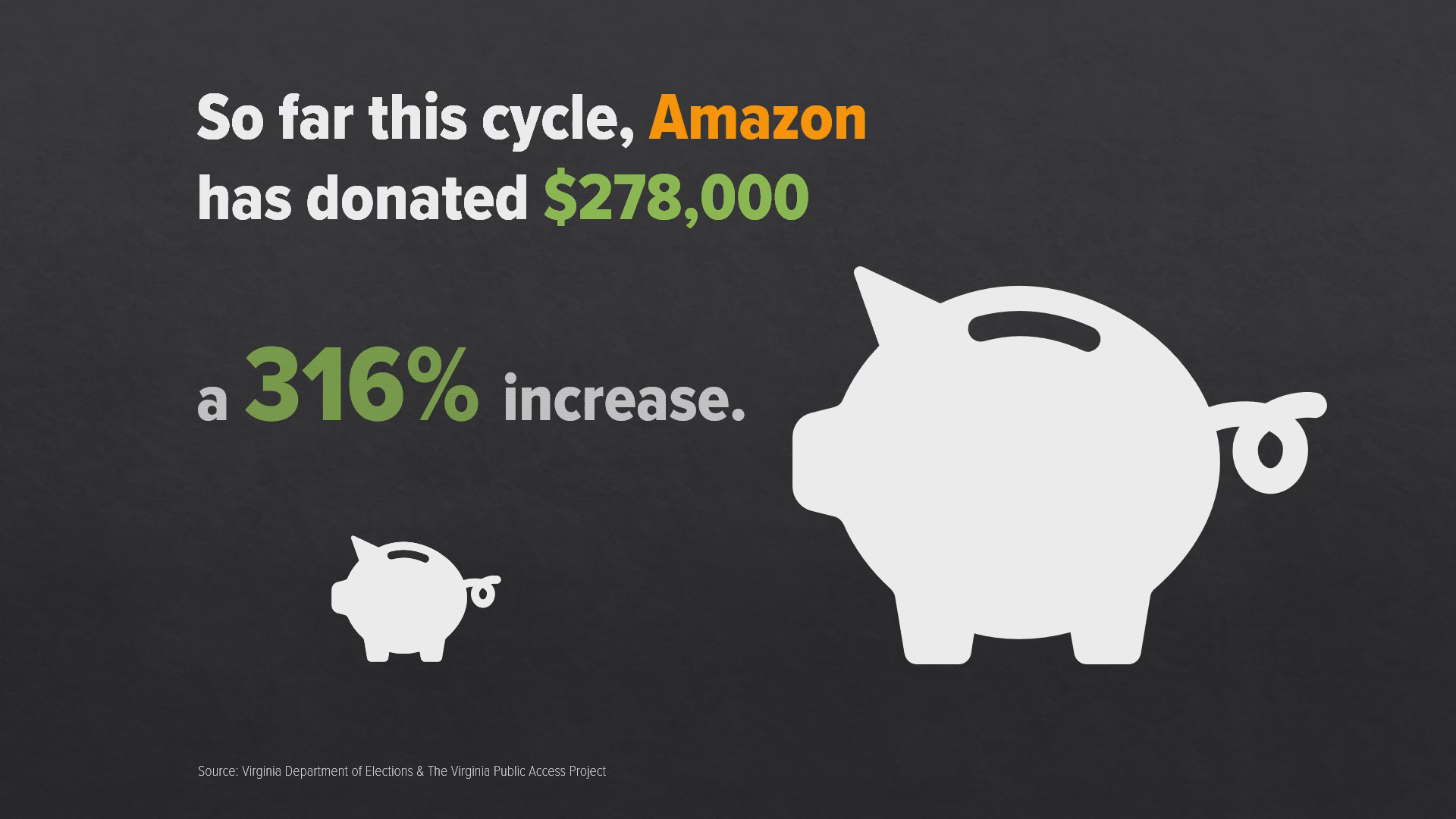 WASHINGTON — With time still left for last-minute donations, Amazon has already more than quadrupled its campaign donations in Virginia – the state selected last year as the home of its new headquarters, or HQ2.

Campaigns were required to make their last financial disclosures prior to to the election to the Virginia Department of Elections on Monday. Those reports show Amazon had donated $278,000 toward the 2018-2019 election cycle as of October 28. And according to the Virginia Public Access Project, additional last-minute and large donation reports put that number at as much as $295,000 as of Thursday night.

That's a 340% increase over the roughly $67,000 Amazon contributed to political campaigns and committees in Virginia during the 2016-2017 election cycle. 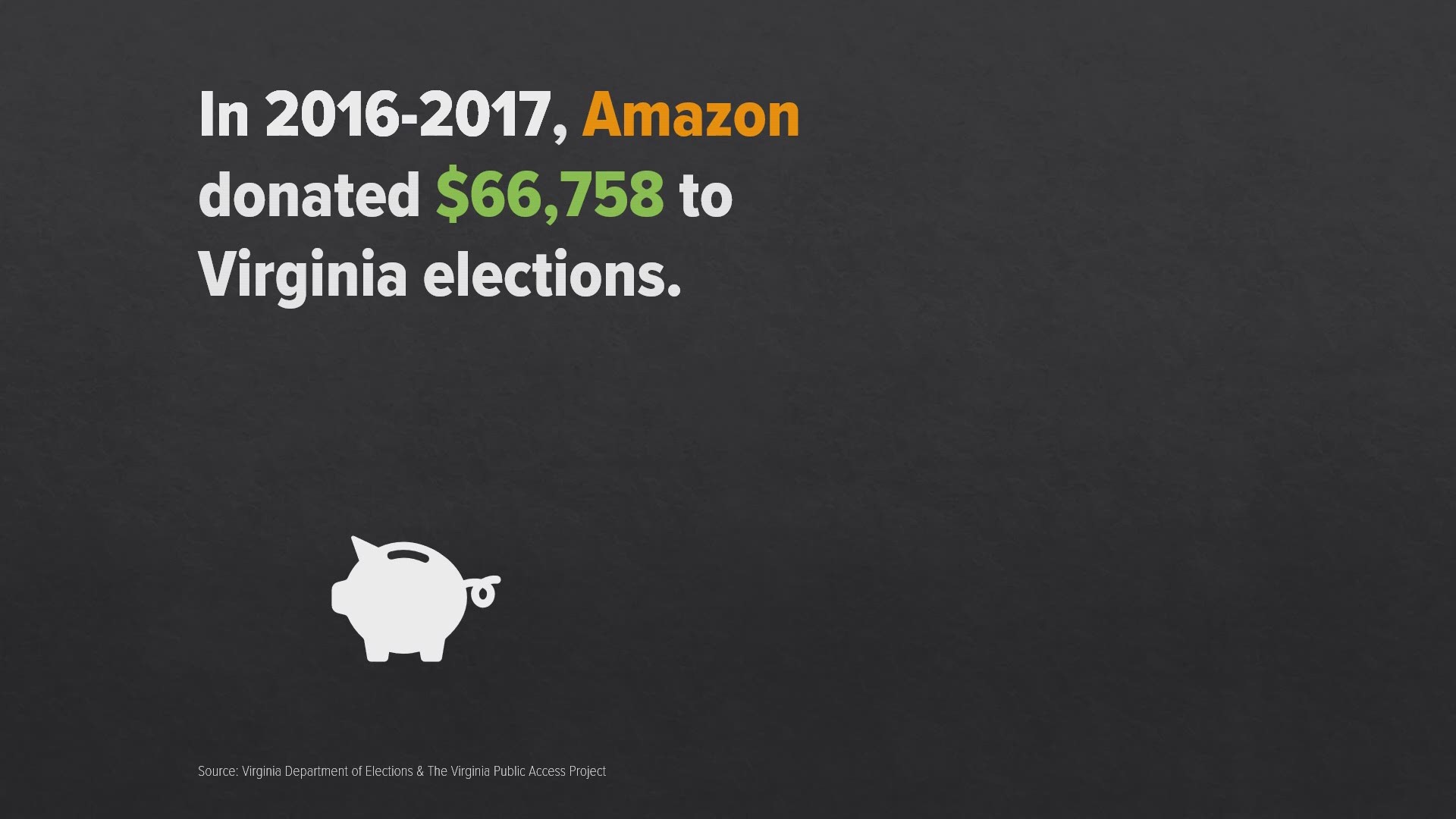 Unlike the previous cycle, where Amazon sent 68% of its contributions to Republicans, the company spread the money out evenly, giving $140,000 so far to Democrats and $137,000 to Republicans. The candidates Amazon chose to donate to are located in almost every House and Senate district in the state, and more than 90% of them are incumbents.

The Virginia Senate Republican Caucus received the largest amount at $25,000. Republican Speaker of the House Kirk Cox, who is fighting for re-election against Democrat Sheila Bynum-Coleman, received the most of any individual candidate, at $7,000.

The increase in political spending in Virginia comes as Amazon is taking fire in its home city of Seattle by critics who say its trying to buy control of the city council.

WUSA9's sister station in Seattle, KING5, reported earlier this month that Amazon has spent almost $1.5 million on the Seattle City Council race so far this election cycle. That includes a $1 million donation to the Seattle Chamber of Commerce's political arm, the Civic Alliance for a Sound Economy.

KING5 chief reporter Chris Daniels, who has covered Amazon extensively over the years, says the donation represents a new, more politically active Amazon than the city has previously seen.

"Really, this dates back another year-and-a-half, two years ago, when there was a discussion about an employee hours tax, also known as a head tax. Amazon was the target of that. Amazon then got very politically active," Daniels said. "They tried to push an initiative that would have banned that head tax. And eventually the city council here had to repeal their own legislation because of the potential initiative. And that’s when we saw the business community, Amazon, really feel empowered to do more in terms of financing races and trying to alter races."

WUSA9 reached out to the 20 Virginia political committees and candidates who have received the most from Amazon so far this election cycle with three questions:

The campaigns that responded said "no" to all three questions. Senator Frank Ruff said there had been no discussion before or after the donation, adding, "I have a strict policy that I do not consider donations to campaigns when I support or oppose legislation, much to the chagrin of some."

We also asked Amazon how they chose the candidates they decided to support, and whether they wanted to address concerns, in Seattle and elsewhere, that the company was trying to buy political influence.

In response, Amazon referred WUSA9 to its political expenditures statement archive – last updated in 2017 – and issued the following statement:

“Amazon has consistently supported organizations, initiatives and candidates connected to the issues that affect our business, customers and employees. As we establish our new headquarters in Northern Virginia, we will work with policymakers in the region to thoughtfully address our shared priorities.”

The final total of Amazon's contributions to the 2018-2019 election cycle won't be available until after the election. This story will be updated once those numbers become available.