Veteran: 'Just because we made it home…this fight's not over.'

A major development played out on Capitol Hill for proponents of a bill helping veterans with PTSD get free service dogs starting next year. 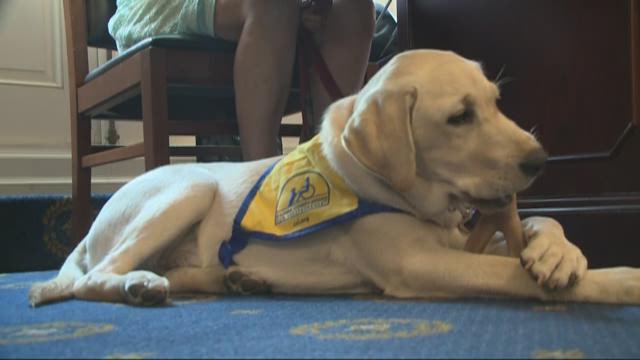 A major development played out on Capitol Hill for proponents of a bill helping veterans with PTSD get free service dogs starting next year.

The Subcommittee on Health of the House Committee on Veterans' Affairs held its first legislative hearing to discuss the PAWS Act. PAWS stands for Puppies Assisting Wounded Servicemembers.

If the bill becomes law, then a five-year, $10-million pilot program would begin in 2018. It would grant $25,000 to eligible organizations to raise and train service dogs for veterans in need.

“We’re doing it to save lives,” testified Rep. Ron DeSantis, an original co-sponsor of the PAWS Act. The Republican from Florida added, “If you end up having a veteran where that works well and they stop using some of the prescription drugs, that’s actually going to save a lot of money.”

RELATED: Inside PTSD: We followed a vet through his 'triggers'

Captain Jason Haag understood the value of a service dog. The Marine Corps veteran credited his German Shepherd, Axel, with saving his life.

Capt. Haag served three combat tours in Iraq and Afghanistan. He returned home with physical and psychological injuries. PTSD can take years to diagnose and years to surface. For Capt. Haag, it happened in a restaurant with his wife.

"Waitress came up behind me," recalled Capt. Haag. "All she did was ask for my drink order. Freaked me out. Didn’t know she was there. Flipped the table over. Went underneath of it. I don’t remember anything else. My wife took me home."

"When I got Axel in 2012, I was on 32 different medications," said Capt. Haag. "Twelve of them were narcotics. I was severely addicted. I was abusing them. I was also drinking heavily."

Today, he has only needed two medications and neither is a narcotic.

Service dogs like Axel can interrupt a panic attack and stop violent nightmares for a veteran with PTSD. They can also perform the tasks of a traditionally trained service dog, including picking up dropped items like a wallet or a cell phone.

"It’s a battle buddy. They’re there for you all the time. No judgment," said Michele Armenta, a dog trainer with service dog organization, Leashes of Valor.

"We may be in a hole that we get ourselves into. The dog's not there to pull us out," she said. "He's there to walk with us on our way out."

A service dog for a veteran with PTSD may help fight a grim statistic: a veteran commits suicide every hour.

But he and two fellow veterans who founded the Fredericksburg, Va., organization want people to know, help is available.

"Either pick up the phone, look on the Internet, send an IM. I don’t give a darn if you send up a carrier pigeon or a smoke signal. But all you have to do is reach out and we’ll help you," he said.

CALL TO ACTION
If you’re moved by our story, you may reach out to members of the House Committee on Veterans' Affairs to tell them how you feel about service dogs for veterans with PTSD.

First, see the list of House committee members. Then, use the drop down menu below to contact the Representative.

Use the drop down menu below to contact a House Representative.