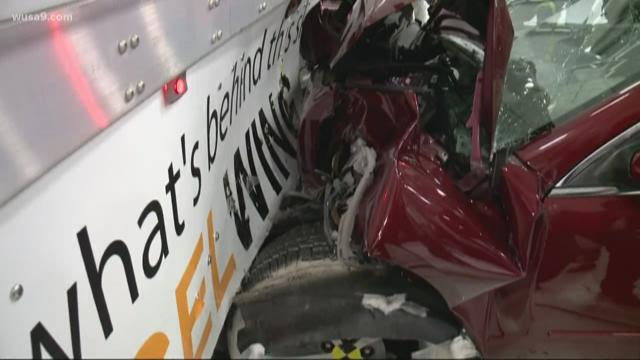 With the families of accident victims by her side, today a bipartisan group of lawmakers led by Senator Kirsten Gillibrand (D) of New York introduced the Stop Underrides Act of 2017.

“We require seat belts, we require all these other safety standards, weight standards, all of it, for safety reasons, and now with the lives of so many loved ones lost its time for the industry to listen," said Sen. Gillibrand.

The Stop Underrides Act of 2017 was written in honor of the thousands of victims of underride accidents nationwide including those profiled in WUSA 9’s Big Rigs, Big Risks series.

In 2004, Lois Durso''s daughter Roya died in a side underride accident the day before Thanksgiving.

Roya's brother Cyrus Sadigh said she "would have been pretty doggone proud today."

Lois said, "I know that she would want to make sure that it didn’t happen to another family.”

Underride accidents happen when a vehicle runs underneath a semi-trailer, shearing off the top of the passenger compartment and decapitating the passengers inside.

The Stop Underrides Act will for the first time require side and front guards on all tractor trailers, as well as strengthen decades-old rear-guard requirements which have been proven to be inadequate.

WUSA9's Big Rigs Big Risks series reported that one of the main problems is that this risk has been on the road for decades and no one has been successful in creating change.

WUSA9 asked Senator Gillibrand what makes her think this legislation will cut through the red tape?

She said, “It’s shocking how this has hurt families and communities all across the country, and I think with this effort to be heard and speaking out, it’s congresses opportunity to listen. And try to make a difference in the lives of these families.”

The bill was drafted after the WUSA 9 Special Assignment Unit produced more than a dozen broadcast reports, a half hour special, a dedicated digital section and unique accident analysis that underscored the extent of the problem.

Marianne Karth survived a rear underride crash in 2014 but her two young daughters, AnnaLeah and Mary did not.

Karth said, “Your team here has followed our story and helped to raise awareness in that way, to each aspect of it, I think that’s really been important.”

For mothers like Karth, this new bill means the possibility saving another family her pain.

“I still hate it as much as ever that it will never bring AnnaLeah and Mary back, but I’m very thankful for the legislators that did take a stand," she said.

In response to today’s news, the nation’s largest trucking industry advocate, Jeff Simms, President of the Truck Trailer Manufacturers Association said, “We represent the views of our members so there’s a lot of work to do. Simms added, “We haven’t had a chance to read the bill but we’re working on it.”

WUSA9 caught up with Simms in August at a side guard crash test at the Insurance Institute for Highway safety in August.

Simms said, “There’s a lot of operational issues you have to consider.” And that the added weight of the side guards would force trucking companies to remove payload, add more tractor trailers on the road…” negating any safety benefits.

But safety experts disagree and lawmakers today discounted that argument.

It said, "The ATA has supported efforts to strengthen rear underride guards in the past, based on data from years of study by [the National Highway Traffic Safety Administration] and the experiences of our members. NHTSA is already examining the potential benefits and problems with side underride guards and we believe they should be able to continue with their work and we look forward to the results of their research."

The Owner-Operator Independent Driver’s Association said, “We have not developed a position but will review the language of what is proposed."

Want to let members of Congress hear what you think about this proposed new legislation? You can find Care2.org's online petition here -- Congress, Act Now to Stop Deadly Truck Underrides