The Martinsburg VA Medical Center is denying telework options despite mailing a letter admitting the affects of COVID-19 on a fetus are unknown. 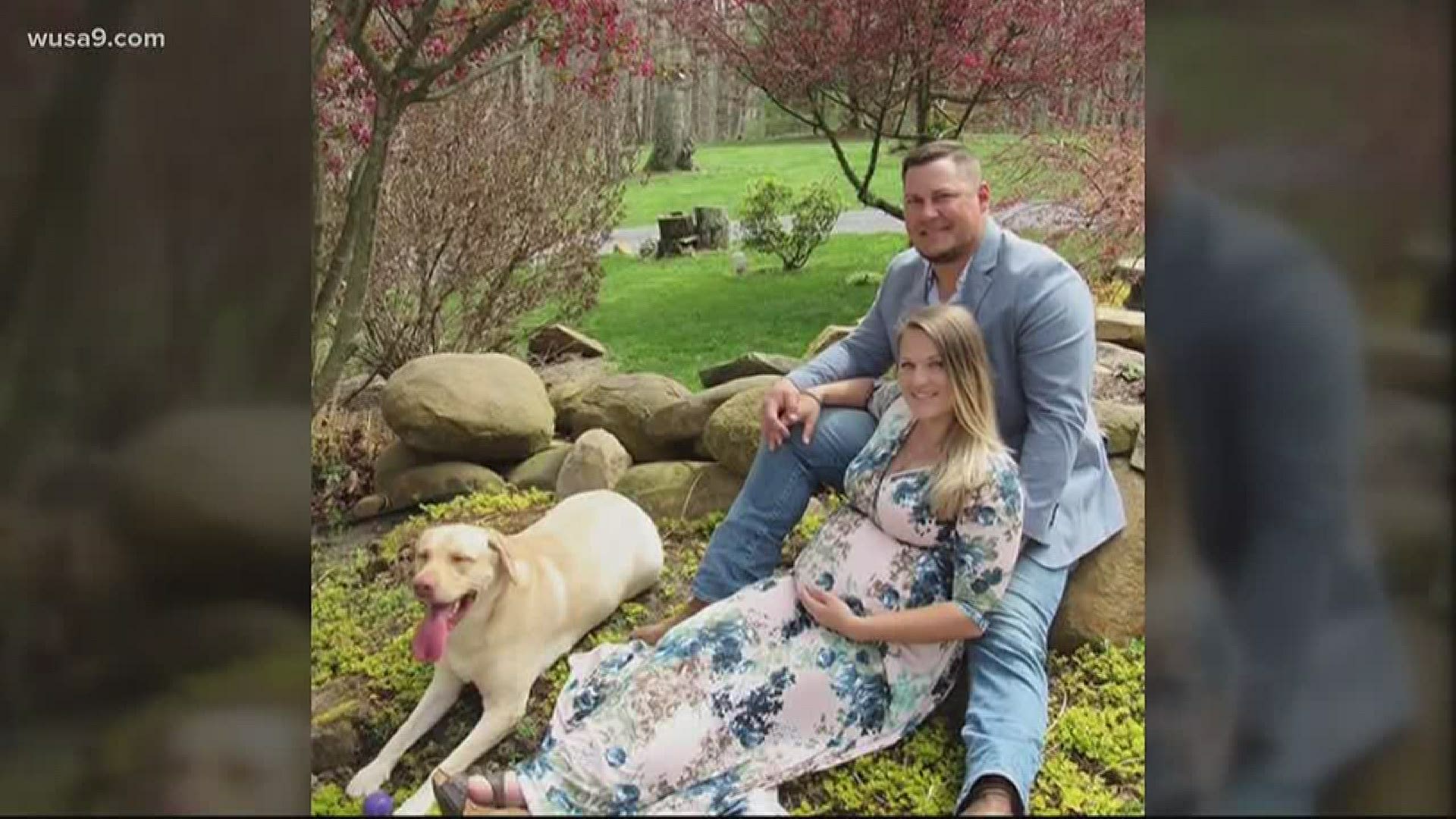 MARTINSBURG, W.Va. — It has been more than five weeks since governors across the U.S. began closing down schools, stores, gyms and movie theaters and urging people to stay home to prevent the spread of coronavirus.

The risks of exposure are real for essential workers, who are unable to stay isolated in their own homes at this point. Those people include nurses, police officers, grocery store workers and others.

Carly Wade was among the 2,200 employed by the Veterans Affairs Medical Center in Martinsburg, W.V. She worked a non-medical desk job for the VA. As coronavirus cases increased, Wade got increasingly worried.

Wade tells WUSA9 she and her husband struggled through miscarriages before finally getting to celebrate a pregnancy.

Wade spoke to WUSA9 via Zoom from her home in Cross Junction, Va. last Thursday.

"I’m finally six months pregnant," Wade said while fighting back tears. "And we’ve gone to this point where I can't risk her. I can't jeopardize my child. Yesterday was my last day. I've worked for the VA for 3 years."

Credit: Carly Wade
Carly Wade and her husband during a gender reveal party

Wade worked for a unit within the Martinsburg VA called Care in the Community.

CITC is an outreach program that plugs veterans in with community doctors if the VA can't help with their specific need. Wade worked with 40-50 others on the second floor of an office building on the other side of town as the main VA Medical Center complex.

"Its just paperwork. Its all online. There’s nothing about our job we can't do from home," Wade said.

Wade described the workspace as an open office with cubicles set four feet apart with common areas for employees. She said a janitorial service does routine cleaning of the office, yet she says employees have to provide their own soap for the restroom.

"My department has changed nothing (since the pandemic began). It's business as usual," Wade said.

In that April 1 interview, Zapor addressed concerns that employees had expressed to WUSA9 anchor Adam Longo as he researched information for this story.

"I want them to know the hospitals approach was not haphazard. It was very thoughtful and deliberate," Zapor said.

Wade disagrees, saying her requests to go remote were vehemently denied by her supervisor.

"She (supervisor) is shouting at us. 'Stop asking me about telework. You're not going to be teleworking. Your numbers aren't good enough. Stop asking me,'" Wade recounted.

WUSA9 independently confirmed Wade's claims through several of her former coworkers, who wished to remain anonymous over fears of retaliation by management at the Martinsburg VA.

WUSA9 repeatedly reached out and connected with officials at the Martinsburg VA dating back to our initial report April 1.

However, when our questions turned to Wade's specific case and WUSA9 inquired why telework was being denied to a pregnant woman the Martinsburg VA did not respond to multiple requests for comment.

An example of that bureaucracy is a document provided by employees to WUSA9 indicating they needed five different levels of authorization in order to be granted permission to work remotely.

In our April 1 interview with Interim Director Allensworth, WUSA9 asked him to address the concerns over burdensome bureaucracy. Additionally, WUSA9 inquired if telework options would be broadened.

"We’re looking at numerous workplace authorities to include staggering of shifts, relocation of activities or offices, to minimize exposure and telework," Allensworth said. "And we’re taking those on a case-by-case basis with what is operationally appropriate."

Because she is a veteran herself, Wade's primary care doctor is with the Martinsburg, VA. She got a letter from the VA that included a fact sheet about pregnancy and COVID-19 saying its too soon to know the effects of COVID-19 on a fetus.

Credit: Carly Wade
Letter from the VA to Carly Wade explaining facts about Covid-19 and pregnancy

Despite the letter outlining unknowns about how COVID-19 can effect a fetus, had she not quit her job, Wade would have been expected to be at work in an office where the Centers for Disease Control and Prevention protocols about social distancing and limiting gatherings of more than two people were not being adhered to.

"Just, they don’t care about the people below them. We're just numbers. We're replaceable," Wade said.

VA Press Secretary Christina Noel at headquarters in D.C. did confirm to WUSA9 that staffing decisions right now are being made by the directors of each VA facility in the U.S., not by the VA Secretary or anyone else in Washington.

So despite the fact that Wade's former colleagues are still working in the office in Martinsburg, WUSA9 has confirmed that many employees who do the exact same job with CITC at VA facilities in Baltimore and D.C. have, in fact, been granted the ability to work remotely.

I also asked Noel what percentage of employees at other VA medical centers were doing remote work; if they were also around 3.6 percent.

She advised WUSA9 to make a Freedom of Information Act Request for that information. The VA has acknowledged receipt of our request.