The FDA and vaccine companies are investigating a few cases of an unusual autoimmune disease in people who have been vaccinated, but there's no clear causal link. 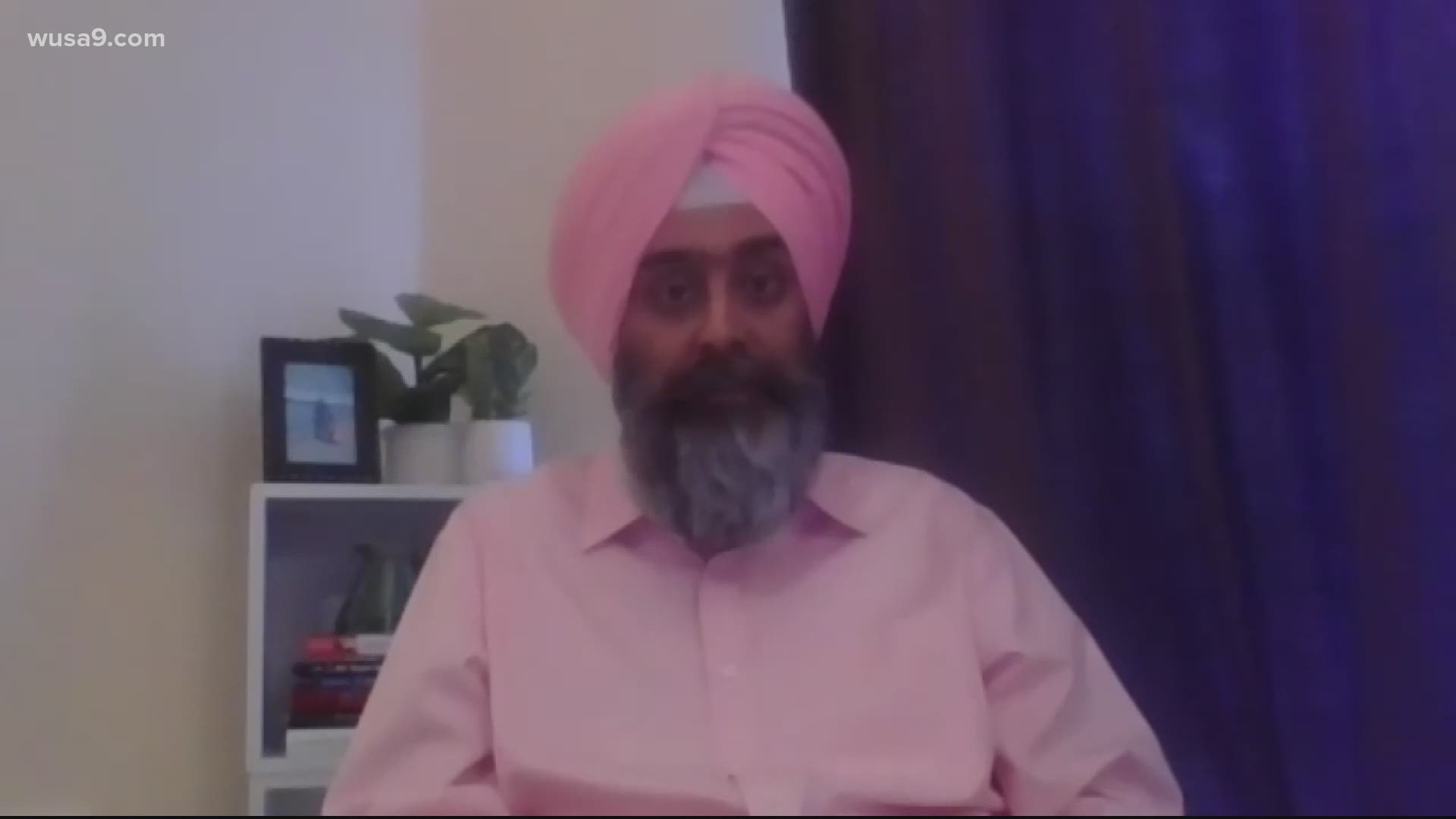 ROCKVILLE, Md. — A Rockville man said he nearly died after getting the Pfizer vaccine.

Sartaj Sing Dhami, 43, said he struggled through a rare blood disorder that flared two days after he got the shot.

It left the father of two with blood platelet levels so low he had a severe risk of brain hemorrhage.

In the small number of similar cases that have been reported, doctors are unsure if the vaccine caused the body to react or if it was just a coincidence.

"FDA is aware of reports of a serious condition called thrombocytopenia, or low levels of platelets in the blood, occurring in a few individuals following receipt of the authorized COVID-19 vaccines," said Food and Drug Administration spokeswoman Abby Capobianco. "Thrombocytopenia can have many different causes. At this time, we are continuing our investigation and assessment of these cases."

"You can argue it's a coincidence. You can argue it's a fluke. But when it's your life, it's very real," Dhami said. The cybersecurity analyst was diagnosed with thrombocytopenia when he was in his 20s, but it was under control until he was vaccinated for COVID-19.

"We take reports of adverse events very seriously. We are aware of cases of thrombocytopenia in recipients of our COVID-19 vaccine as reported to the (Vaccine Adverse Event Reporting System) and/or reported to Pfizer. We are collecting relevant information to share with the FDA. However, at this time, we have not been able to establish a causal association with our vaccine," Pfizer spokesman Steven Danehy said.

"To date, millions of people have been vaccinated and we are closely monitoring all adverse events in individuals receiving our vaccine. Serious adverse events, including deaths that are unrelated to the vaccine, are unfortunately likely to occur at a similar rate as they would in the general population," he said.

RELATED: CDC to use text message tool to track COVID-19 vaccine side effects

RELATED: VERIFY: Do younger people tend to see stronger side effects from vaccines?

A month after the crisis, Dhami is still on steroids, but otherwise almost fully recovered. "Perfectly fine. I'm happy to report my platelets are normal," he said.

He prepared his wife for the worst. "Here's who you need to call, because we just don't know what is going to happen next," he said he told her.

Thrombocytopenia or ITP is an autoimmune disorder -- your antibodies attack your blood platelets and the cells that make platelets. Platelets are critical to blood clotting.

Credit: Family Photo
Sartaj Dhami, a father of two from Rockville, believes the flare up of his rare autoimmune disorder was caused by his first dose of the COVID vaccine.

On Facebook, the wife of Miami OB-GYN Gregory Michael said he died of ITP and a brain hemorrhage 16 days after getting the Pfizer vaccine.

The New York Times has documented several other cases where patients either developed ITP or saw a flare up after vaccination.

Pfizer is actively investigating what happened to Dr. Michael, but does not believe the vaccine is directly connected to his death.

"Any reports of death following the administration of vaccines are promptly and rigorously investigated jointly by FDA and CDC (Centers for Disease Control and Prevention). Such an investigation includes working with health care providers to obtain medical histories and clinical follow-up information. Clinical case review is conducted by FDA and CDC. In addition, FDA and CDC have a wide array of systems in place to monitor the safety of vaccines," said Capobianco, the spokeswoman for the FDA.

"It's not something that should stop vaccination. And it is usually quite treatable," said Dr. James Bussel, a hematologist and professor emeritus at Weill Cornell Medicine, who has published hundreds of articles on ITP.

Bussel said he has not found an uptick in ITP in the months since millions of people started getting vaccinated for COVID-19, but he also said if all the cases are coincidental, he'd expect to see reports fairly evenly balanced between people getting their first and their second doses. He said the reports he's seen are all in people getting their first dose. That leads him to suspect that some, but perhaps not all, are reactions caused by the vaccine.

Bussel said it's important to get the word out so physicians are prepared to treat ITP in the rare instances when it occurs.

"Every vaccine has had some cases (of ITP) reported with it," especially measles vaccinations, Bussel said. "The adverse outcomes of having COVID are bad enough that it's worth getting the vaccine," he said. Bussel said even people who already have ITP should get vaccinated.

"People should take the vaccine. I'm a proponent for the vaccine. But do understand your underlying health conditions," Dhami said. He is not planning to get his second dose, but may get the Johnson and Johnson vaccine if data show it's safe for people like him.