The Grille at Flower Hill is closed until Thursday, but county authorities say they will return then to see if employees are wearing masks. 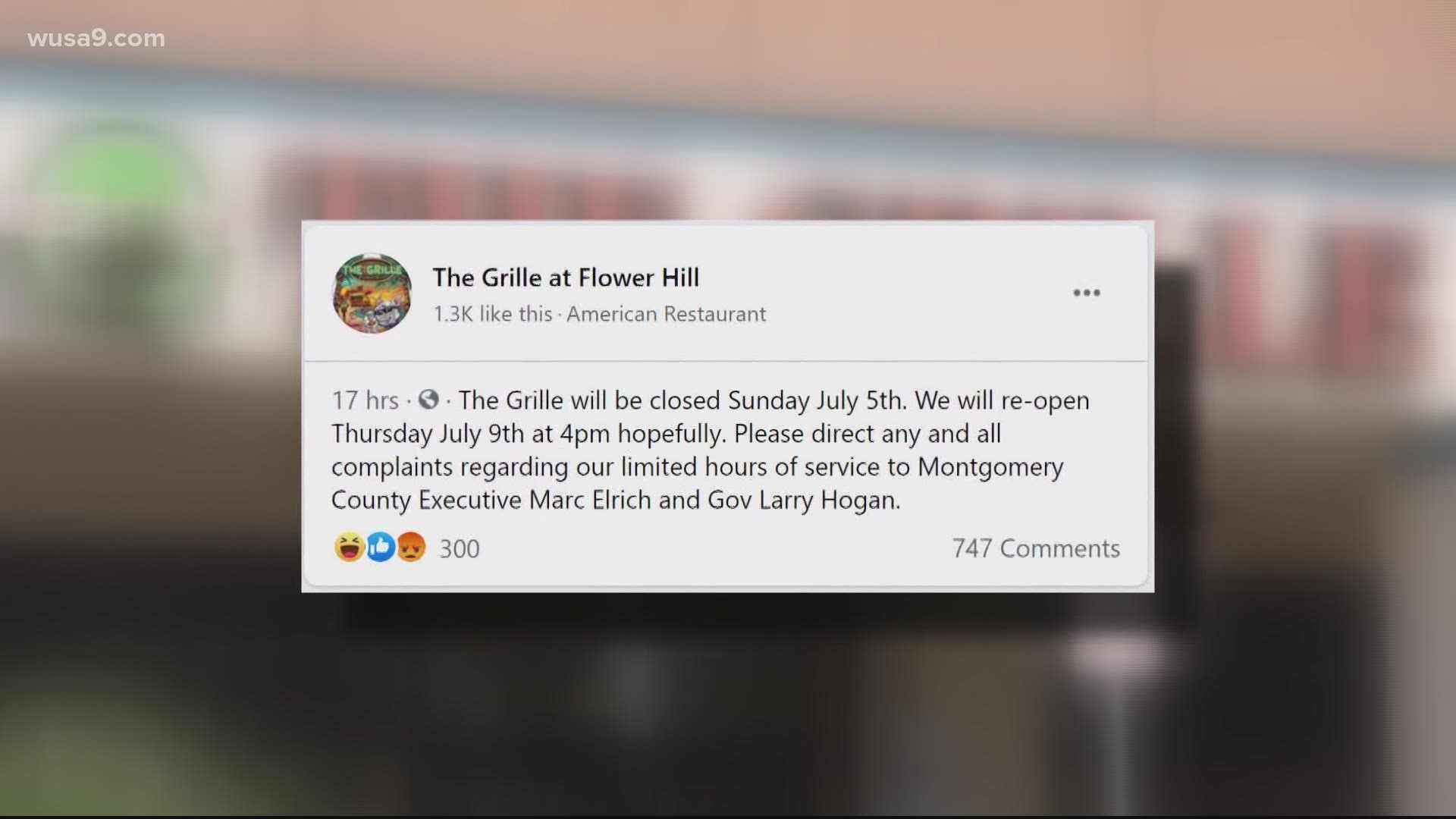 GAITHERSBURG, Md. — Montgomery County health authorities have confirmed that they warned a restaurant owner to equip his employees with masks to prevent the spread of coronavirus after receiving complaints that workers were unprotected.

Social media brought the issue to light with multiple posts about the Grille at Flower Hill in Gaithersburg, Maryland.

County authorities said they visited the Grille last Thursday after receiving complaints on June 29 that employees were not wearing masks while working at the restaurant.

According to a statement from the County Department of Health and Human Services, the restaurant received a verbal reminder to make employees wear masks.

RELATED: VERIFY: Who's in charge of enforcing mask rules in the DMV?

Restaurant owner goes public on anti-mask policy. The comments indicate this may have backfired. from BusinessTantrums

But the county reported it received more complaints on Monday.

According to a posting of hours on the front door, the restaurant is closed until Thursday. Authorities are promising to return Thursday when it reopens to verify whether the mask order is being enforced.

On Monday, the restaurant’s Facebook page read: “Please direct any and all complaints regarding our limited hours of service to Montgomery County Executive Marc Elrich and Gov. Larry Hogan.”

As of Monday afternoon, that post had generated nearly 1,000 comments, many scorching the restaurant and vowing not to patronize it.

“Mask up or shut the doors for good," wrote one Facebook user.

Ricky Stakem was a regular customer who said he’s now done with the Grille At Flower Hill.

“Just knowing they're not taking a national crisis seriously is a little bit of a betrayal," Stakem said.

Jefri Gutierrez said he won't give up on the Grille if employees start wearing masks.

"I would probably say something, but I wouldn’t make such a big deal," Guiterrez said. "As long as they put it on. I think everybody should have them.”

The business is operated by a limited liability corporation called TwoMore, according to state records.

WUSA9’s extensive attempts to contact the operator of the LLC have not been successful as of Monday evening.

RELATED: VERIFY: Requirement to wear a face mask does not violate constitutional rights