On Thursday, Governor Larry Hogan announced that mass vaccination sites around the state of Maryland will see phased demobilizations over the next few weeks. 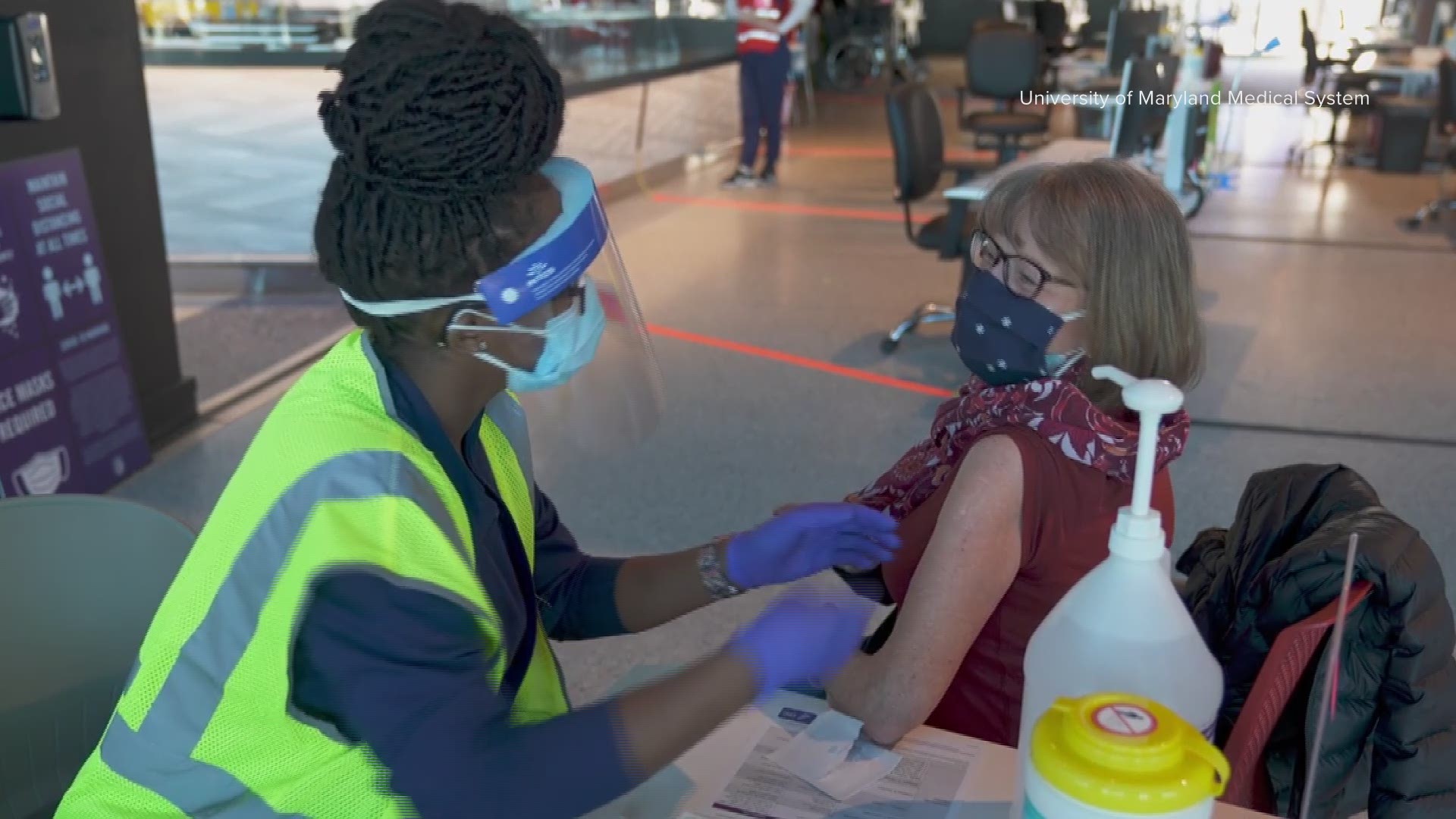 In a statement to WUSA9, Hogan pointed to Maryland's high vaccination rates for the shift in vaccine strategy and said more resources would be directed toward mobile clinics and community activities.

“I said our goal was to put ourselves out of business at these mass vaccination sites, and as one of the most vaccinated states in the country, we are now approaching that point,” Hogan said.

Operational responsibilities at several mass vaccination sites will shift from the state to local partners, while other sites will close.

Most of the mass vaccination sites will offer the Johnson & Johnson Janssen one-shot dose until they close.

The Greenbelt Metro FEMA Community Vaccination Center became the first mass vaccination site to close in our area when it stopped operations this week. The Hagerstown Premium Outlets site will be the next place nearby to see a change when it switches operations to Meritus Hospital on Saturday.

The mass vaccination site at Regency Furniture Stadium in Waldorf will switch operations on June 24 while the Navy-Marine Corps Memorial Stadium effort will continue until July 3.

The vaccine operation at Six Flags America Theme Park in Upper Marlboro will be the last to switch from state operations when it stops offering doses on July 17.

"These sites were an incredible undertaking, and I want to especially thank everyone who was involved in building them, and all the nurses, volunteers, and National Guard members who have staffed them rain or shine over the last several months," Hogan said.

The mass vaccination announcement came a day after state health data showed fewer than 100 reported new cases of the disease, the first time the mark has been reached since March of 2020.

Jason Marx has helped lead the mass vaccination site at M&T Bank Stadium in Baltimore for the past few months. On Thursday, he said the announcement from the governor marked another milestone in the fight against the pandemic.

"It’s bittersweet for us. We had a mission. We were really dedicated to the mission," Marx said. "We wanted to get as many people vaccinated as we could and as quickly as we could and we feel we’ve been very successful in doing that.”

I said our goal was to put ourselves out of business at our mass vaccination sites, and as one of the most vaccinated states in the country, we are now approaching that point.

In total, Marx estimated medical teams at the stadium helped administer around 250,000 doses of the vaccine.

Every day since it opened, he said over 200 people from the University of Maryland Medical System, Maryland National Guard, Maryland Stadium Authority, and the Maryland Department of Health helped coordinate getting people protected from COVID-19.

Areas inside the stadium were transformed to make the effort possible, including converting some of the bars into pharmacies. After also serving as a critical care physician at times during the pandemic, Marx felt the reward of being able to offer the vaccine doses.

These sites were an incredible undertaking, and I want to especially thank everyone who was involved in building them, and all the nurses, volunteers, and National Guard members who have staffed them rain or shine over the last several months.

"I’ve seen the worst of Covid taking care of patients in the intensive care unit," he said. "Now, being on this end of the spectrum, giving vaccinations has been really fulfilling. It’s been a team effort and everyone is very excited to be part of it.”

Moving forward, Marx said his time at M&T Bank Stadium would leave him with many memories. In particular, he brought up the time when Vice President Kamala Harris and Dr. Anthony Fauci toured the site.

As the site gets set to switch from state operations on July 2nd, he was proud of the effort from his team.

"The mass vaccination sites are going to be one part of the story of how the US and how the country and the world attacked COVID," he said. "Now it’s about getting into community centers and church centers and using mobile units."