40-year-old Ahmad Ayyad ran marathons before he contracted coronavirus in March. Then, he could barely get out of bed. 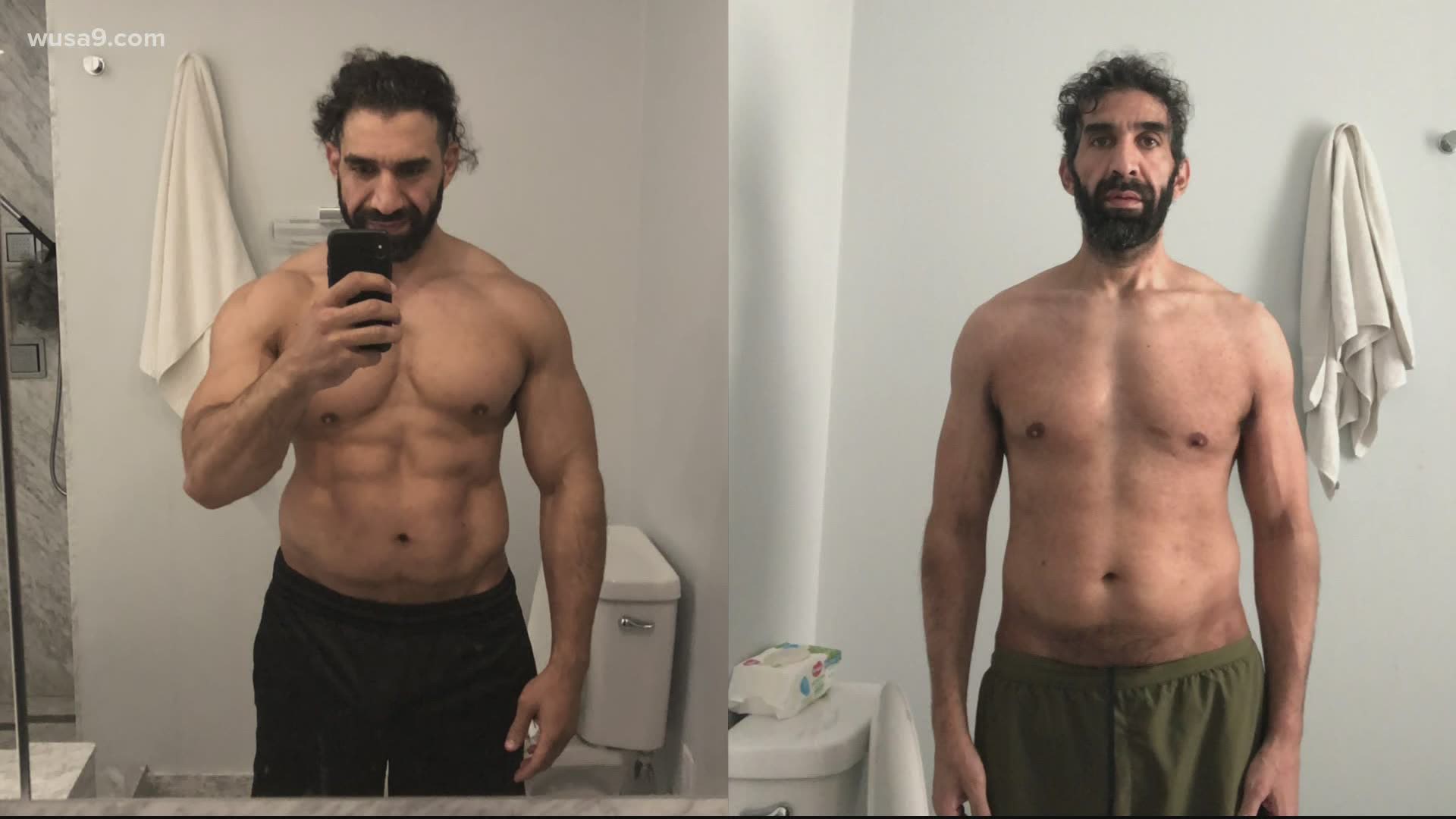 Ayyad said fitness has always been a central part of his life. He worked out every day, ran marathons, climbed mountains -- anything for a new challenge.

When COVID-19 hit the DMV, he didn't take it too seriously. After all, he rarely got sick.

Then, on Wednesday, March 11, he felt weak all of a sudden. He thought he was just overworking his body, so he rested and tried to recover at home until the weekend.

Sunday, he realized he wasn't getting better and needed to go to the hospital -- still not fearing the worst.

“I thought I just had the flu. At that point, corona was still new," Ayyad said. "We thought it was just an over-hyped flu. I normally don’t get sick, so when I went to the hospital, 99.9% I thought I just had a small cold. When they said they wanted to intubate me and said I wasn’t getting enough oxygen, I actually stopped them and said, 'you have the right person? I don’t feel that bad.' And they said, 'no you have corona' and that was a shock there and then.”

Credit: Ahmad Ayyad
Ahmad Ayyad before he got the coronavirus (left) and after he was released from the hospital at 169 pounds (right).

Ayyad said he barely had enough time to call his parents to let them know he was in the hospital, and call a friend to pick up his dog, before he was intubated at Sibley Hospital. The next day, he woke up at Johns Hopkins.

He said he was the first person Hopkins had to put on a ventilator for the coronavirus.

"I got the tube down my throat, I got the oxygen mask, and I don’t know what’s going on," Ayyad said. "I Facetimed my family, and they’re on their way to Hopkins. I said I can’t have visitors...And, then my best friend that works at GW was messaging me back and forth, and I’m like 'am I going to die?' As I was reading her messages, I fell into a coma.”

He would remain in that coma for 21 days -- and on a ventilator for 25 -- well past the two week limit of when doctors say people will typically be able to come off of it.

"I wake up, I rip the tube out, and nurses come in, put the oxygen on me," Ayyad said. "They don’t know how I woke up. And then I couldn’t breathe. Then they put me back in a coma."

He stayed in the medically-induced coma for four more days before he was able to wake up and breathe on his own. Then, he started to examine the damage done to his body.

"You pull your hospital gown, and you look at your legs, and you start to look at your arms, and you’re just admiring your body in a way where you’re like what happened to all my muscles? Ayyad questioned. "How long have I been here? You have a thousand questions. You’ve got everything strapped to your body. Tubes, oxygen masks, everything around your heart. And you’re just wondering what happened to me?"

He said his beard, hair, and nails had all grown long -- to the point where he didn't even recognize himself. Then, came the recovery.

Credit: Ahmad Ayyad
Ahmad Ayyad snapped this picture of himself after waking up from a three-week coma, because of the coronavirus.

The doctors told him he would gradually get better -- and as he saw improvements, he felt reassurance that he could make it happen. He said the doctors gave him a year to rebuild his body. He wanted to get it done by September.

“Soon as I got home, I had to stay two weeks alone in the house, so I literally stayed for three weeks, sat at home and ate," Ayyad said. "I ate and I would take small walks, and my walks would increase by two blocks, three blocks, until it got to like 15 blocks. And, then I was able to take small jogs, and then I got back in the gym, and that was humbling, because I used to bench 300 pounds, and now I’m benching the bar, which was only 45 pounds."

He joined DMV Iron Gym in Alexandria, because it's open for 24 hours, allowing him to spend five to six hours a day there daily. And, it's paying off.

He left the hospital at 169 pounds and has put on 50 more in the last two months. And Ayyad is up to benching 225 now.

Endlessly positive about his own prognosis, Ayyad said the toughest part was learning what his family went through while he was in a coma.

"Knowing that every day, my mom would call three to four times a day, asking how I was doing, and the only answer they would get is 'he’s stable but in critical condition,'" he said. "Then learning that there were several nights where the doctor would call my father and say, 'he won’t make it through the night.' That was the hardest thing for me to realize."

Credit: Ahmad Ayyad
Ahmad Ayyad celebrated returning to the gym for the first time since he battled COVID in the hospital for six weeks.

The 40-year-old said while he still has dreams about nurses waking him up every three hours to check his vitals, he's beyond grateful for the medical teams that risked their lives to save his.

Now, he said he's focusing on getting his body back to normal in an abnormal time. In that sense, he said the pandemic restrictions have been helpful, because he doesn't feel like he's missing plans to stay at the gym.

"There’s no feeling bad for myself or feeling like I’m expecting people to feel sorry for me," Ayyad said. "It happened, and I’m lucky that I survived it, because there’s, unfortunately, some people that didn’t survive it. I’m blessed that I’m here and I’m working out and I’m getting back in shape."

He laughed, reflecting on how he's become a fixture at the gym he only joined a couple months ago.

When he looks at the cases increasing in the DMV and nationwide -- his siblings and brother-in-law also contracted COVID in Texas and Florida (though milder cases) -- he hopes people take seriously their role in slowing the spread.

Ayyad said he's focusing on working out his body, spending time with family, and managing the two businesses he owns in Arlington -- all with a smile.

"You know, it’s life," he said. "You can get down and stay down, or you can get up and stay positive.”