Audra Elam said the CDC denied her dog entry into the United States after the pair were initially separated in Africa. 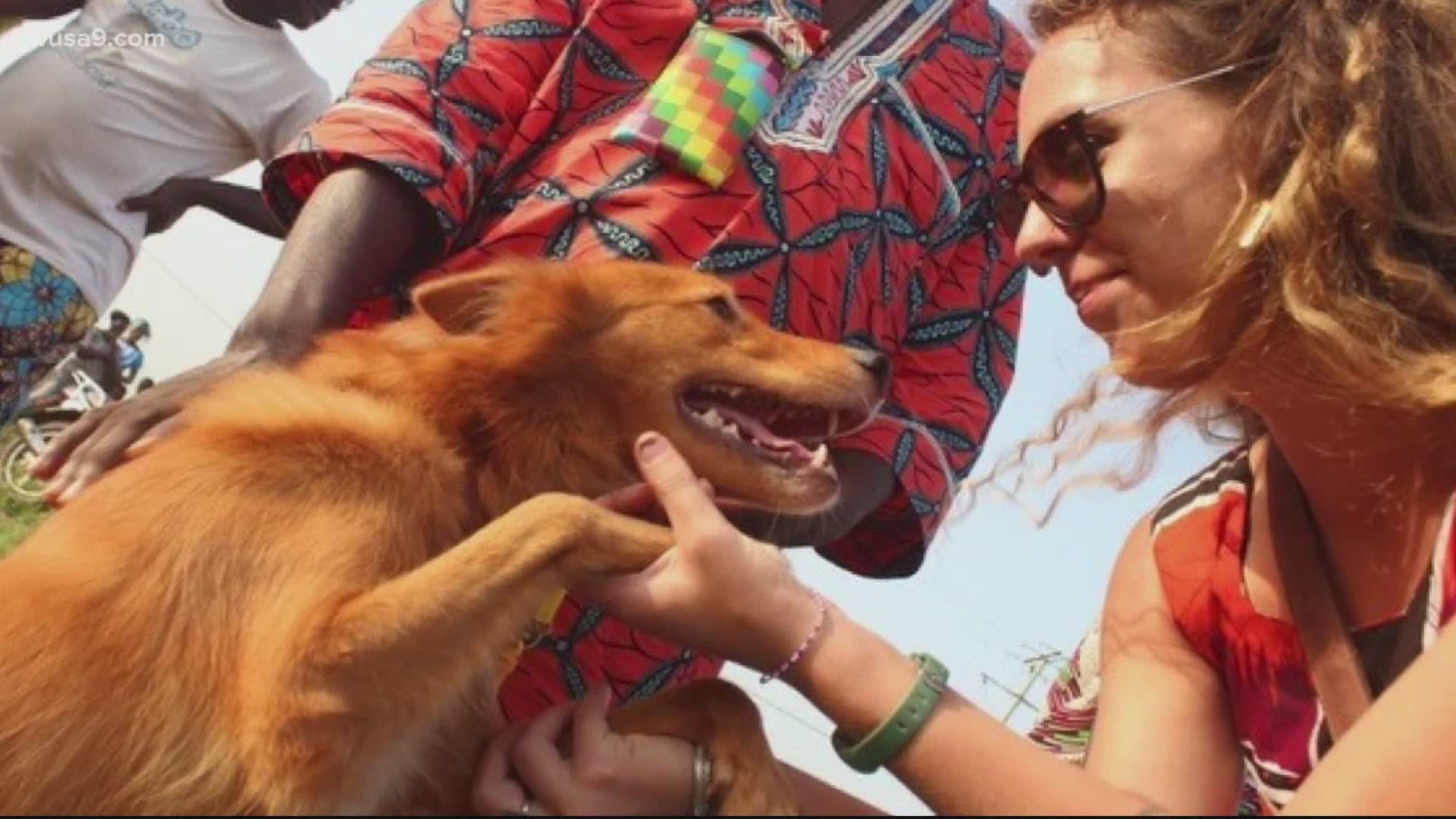 WASHINGTON — An American Peace Corps member is working to fight the deportation of her dog to Ghana.

In March, Audra Elam, of Illinois, evacuated her post in Togo after the Peace Corps directed its members to return to the United States due to the coronavirus’ spread.

Elam said Socrates, who had previously been cared for by several other members of the Peace Corps, would go on to become her best friend.

However, Elam said a problem suddenly arose when Socrates arrived at JFK International Airport in New York in late June.

“So, he gets here and I'm told that he doesn't meet CDC requirements,” she said. “[So] he's going to be sent back.”

The Centers for Disease Control and Prevention [CDC] denied Elam’s request to import Socrates from Ghana. According to a CDC document provided to WUSA9 from Elam, Socrates’ rabies vaccination had expired.

The document also stated the dog lacked the accurate paperwork necessary for it to be admitted into the United States. The CDC said Socrates’ papers were inaccurate due to his expired rabies vaccine.

As a result, Elam said she was informed Socrates would have to be sent back to Ghana to quarantine, and that Socrates could be deported from New York as soon as Friday.

Elam said in the whirlwind of trying to evacuate from Togo she was not able to see the paperwork the company handling Socrates had until he traveled to America. She said she was unaware Socrates’ vaccine had expired.

“I haven't contested that,” she said. “And, I pled for re-vaccination in quarantine, on my own dime, because you know that ultimately was my responsibility.”

However, she added Socrates was eventually administered the vaccine he needed at JFK. Elam provided documentation from the ARK at JFK, a veterinary service at the airport, showing the organization had given Socrates a rabies shot Tuesday.

She said she does not understand why her dog must quarantine in Ghana when he has received the necessary vaccine required by the United States government.

“As of right now, he's vaccinated, but we still don't have approval for quarantine here in the states,” Elam said.

Elam said she is now concerned for her dog’s well-being. She said Socrates was malnourished when he got to the United States.

According to Elam, the family tasked with feeding him in Togo has been financially impacted by the coronavirus. She said they now do not have the means to feed Socrates and all of their farm animals adequately.

“They are amazing, absolutely amazing people,” she said. “But, they have their own animals to feed and they are involved in animal husbandry. They have goats. They have sheep. They have chickens. And, they have two children.”

WUSA9 reached out to the CDC for further explanation on its decision to deny Socrates entry into the country, but we have not yet receivet a comment from the agency.

“I don't want to have to fight this hard when there are bigger fights to be had right now,” Elam said. “This is small potatoes compared to everything else [going on]. So yeah, I am surprised. I am saddened by it."

The situation facing Elam and Socrates has attracted much attention in the nation’s capital.

Animal Wellness Action [AWA], a nonprofit organization based in D.C., said it has been in contact with several members of Congress working to stop Socrates from being deported.

“The CDC has made this an odd priority considering that we are facing a global pandemic,” Holly Gann, the AWA’s Director of Federal Affairs, said. “We are in unprecedented and trying times and the compassionate and humane solution is to allow Socrates to be quarantined here in the U.S.”

Gann said the AWA is also worried about the welfare of Socrates.

“We're concerned that the CDC will put the dog's life in danger if he is sent back to Ghana,” she said.

Former U.S. Senator and presidential candidate Bob Dole even weighed in on the matter via Twitter.