A recent survey discovered 50 symptoms that COVID-19 survivors reported experiencing, ranging from fatigue to burning sensation throughout their bodies. 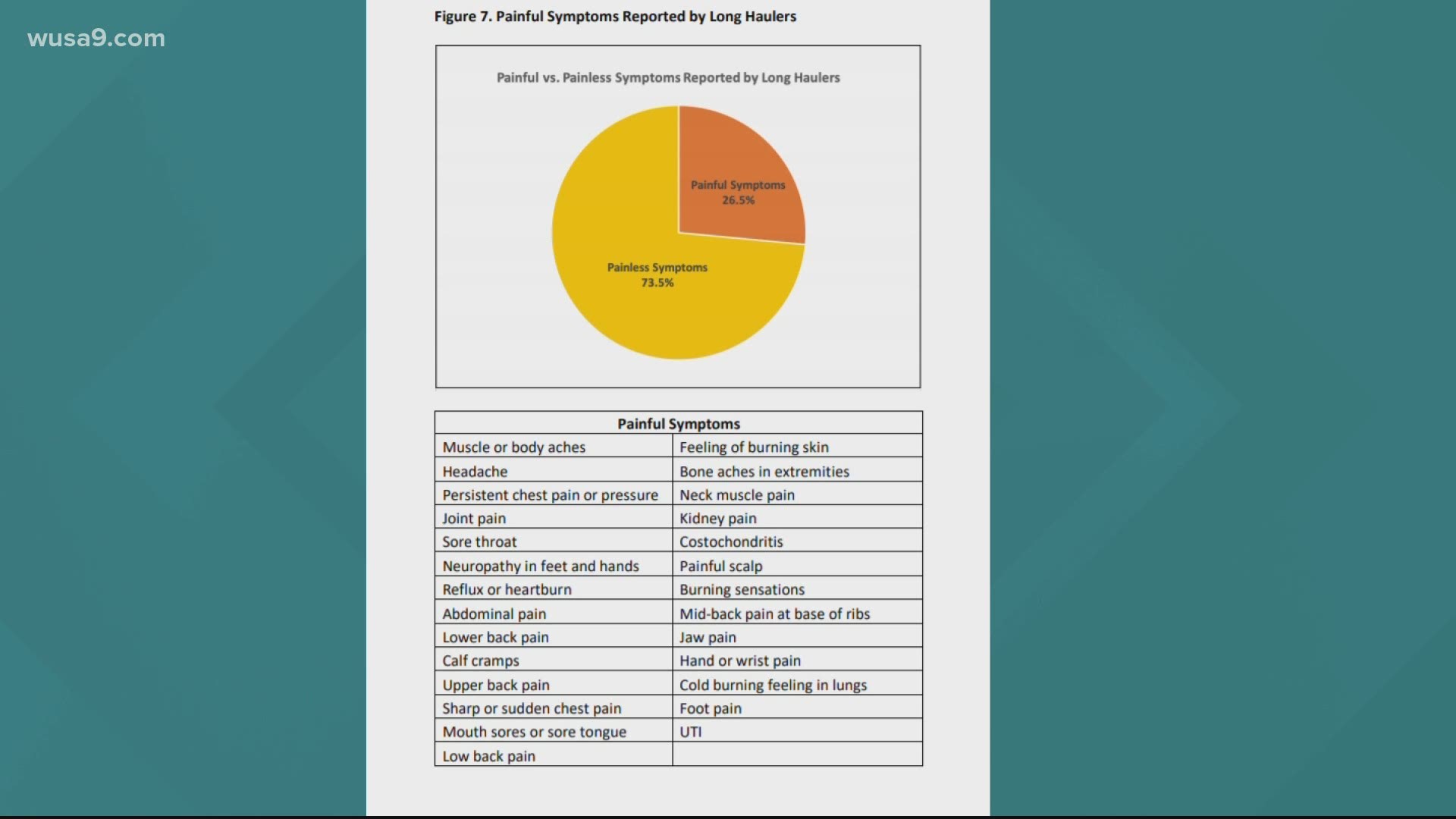 WASHINGTON — If you are a coronavirus survivor and have days when you don’t feel like your normal  self, you are not alone. More people are coming forward with reports of long-term symptoms and health issues.

One survivor opened up about the unusual symptoms she is continues to experience. An expert from Johns Hopkins School of Medicine weighed in as well.

Josy Cartland, a mother of five and grandmother of three, feels like her body has turned against her only three weeks after she and her husband were diagnosed with COVID-19. Right now, they are in the early stages of recovery.

“Right now, my body is just on fire, I feel like I’m burning from the inside out,” Cartland said. “Just imagine a really hot sunburn, the worst sunburn you’ve had, you feel all the tingling and burning sensation in your hands, your feet, your legs.”

“My hands are going numb, my legs are numb from my knees down,” she said. “My toes are numb and it’s very uncomfortable, a lot of tingling in the face.”

Cartland, who wears a pacemaker after having a stroke two years ago, said she took all the precautions to avoid contracting the coronavirus, forfeiting visits from  family for months.

But when her husband, Brian, had a massive heart attack in April, they had no choice but to leave the house. They were in and out of the hospital for much of the summer following his surgery. Cartland suspects they picked it up along the way.

She had every symptom, except headaches and fever.

“It’s overwhelming emotionally and mentally,” Cartland said. “You hear so many stories that you can go from good to bad to worse.”

Within 24 hours of being diagnosed, the Cartlands were taken to the hospital. Josy had immediate cardiac issues. Her husband, who recently had heart surgery, was monitored for his high fever.

Josy Cartland was rushed back to the hospital two weeks later after developing pneumonia.

"I’m so grateful to be breathing right now, “ she said.

While the couple is on the mend, other COVID-19 survivors, who call themselves the “ Long Haulers”  in the Survivor Corps support group on Facebook, have reported similar health issues. The group has more than 100,000 members on Facebook.

About 27% of those surveyed reported painful symptoms like burning sensations in different parts of the body.

Dr. Panagis Galiatsatos, who is a professor and pulmonary and critical care physician at Johns Hopkins University School of Medicine, tells WUSA9 that some mental and physical effects are common.

“Surviving is just chapter one,” said Dr. Galiatsatos about the virus. “ For them [survivors] to regain the quality of life that they had prior to this may take time for a lot of patients.”

Dr. Galiatsatos said some of the long-term effects can come from the virus or intervention to save someone’s life. He said more research is needed for morbidity.

“Starting from head-to-toe, we see ongoing mental health consequences,” Dr. Galiatsatos explained, which he said could come from aggressive medications used to keep patients alive. Other contributing factors are depression and post-traumatic stress from the experience.

“From the neck below in the lungs, we see ongoing consequences there,” Dr. Galiatsatos said. “Patients may still be needing oxygen for instance.”

“We see so many unique complications,” he said.

Dr. Galiatsatos said it is important to build a good relationship with a healthcare professional and talk about your symptoms.

“The other big part of it is doing activities that can help mitigate some of the symptoms your feeling,” Dr. Galiatsatos said. “The survivors have to raise awareness of the disease, we need to be cognizant of it.”

That’s why Cartland and her husband will continue to share their story to let others know they are not alone.

“We need to be there for each other, we’re in this together, “ Cartland said.