Should DC have done more to keep crowds from cherry blossoms amid coronavirus outbreak?

“It was so obvious that this would happen, and the Mayor did nothing to prevent it." one Twitter user wrote. 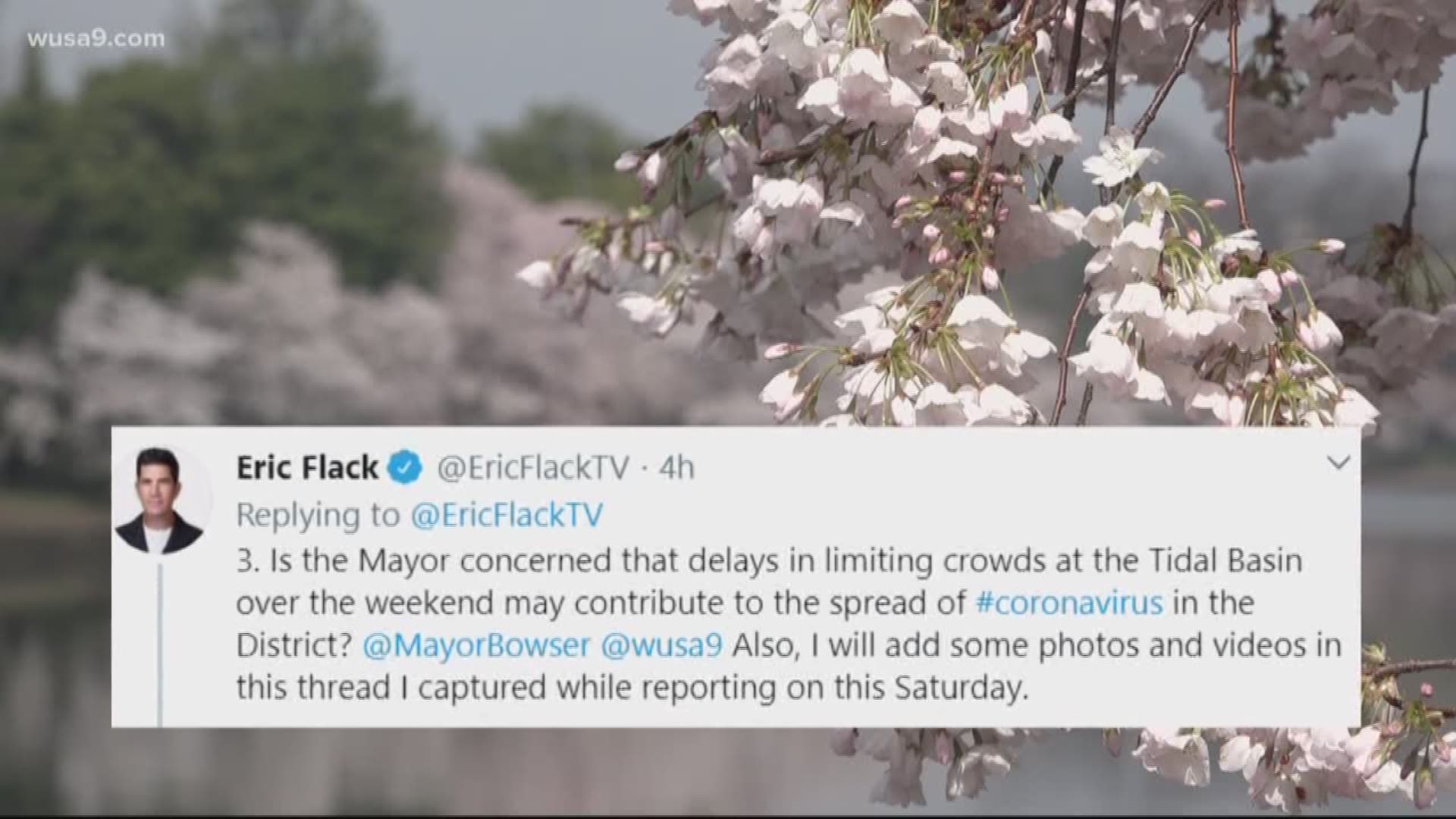 WASHINGTON — During Monday's news conference, DC Mayor Muriel Bowser had a blunt message for people in the District.

The order comes amid questions over whether the Mayor did enough to keep people at home over the Mar. 20 weekend, when large crowds gathered along the Tidal Basin to see the cherry blossoms.

The outrage to the images tweeted out by WUSA9’s Chief Investigative Reporter Eric Flack was overwhelming on social media, most critical of Mayor Bowser for allowing it to happen.

“It was so obvious that this would happen, and the Mayor did nothing to prevent it. It’s completely incompetent,” @laurieannhaus tweeted in response to one of the videos.

Even the Surgeon General of the United States during an appearance on CBS This Morning complained about what he saw.

“I’m driving in and seeing people all over the place getting ready for cherry blossoms,” Dr. Jerome Adams said in an interview with Gayle King.

In her Monday press briefing, Mayor Bowser repeatedly said DC residents should not be wandering out to places like the Tidal Basin.

“Even though we’ve canceled the parades we’ve closed the restaurants the museums are closed, the trees will still bloom, as they do every year,” Bowser said. “And people from not just DC, but all over the region, were flocking to that location.”

“And the measures that we employed were pretty extraordinary,” Bowser said. “We do not police national parks. So for us to use our local police resources to police a national park, was an extraordinary use but we felt very necessary.”

But the Mayor was not pressed on why that didn’t take effect until Sunday morning at 7 a.m. or whether her administration dropped the ball by not doing more, sooner.

Bowser said in her presser that she would now be instructing law enforcement to start breaking up large gatherings that are not practicing social distancing.

WUSA9 is temporarily not sending reporters to news conferences to help in preventing the spread of coronavirus. So, we emailed and even tweeted the Mayor the following questions.

Latoya Foster, Mayor Bowser's director of communications, said her boss did everything she could to keep crowds from gathering.

“The mayor implemented a ban on mass gatherings prior to this weekend," Foster said. "And over the weekend she took bold action to ensure the safety of residents and tourists by closing roads around the title basin.”

Mayor Bowser was also asked about ordering a city-wide shelter in place.

“A shelter in place means you can never leave the house,” the Mayor responded.

That is not true.

Current shelter in places around the country, now impacting 100 million Americans, does allow people to leave their homes for essential things like food and medical care. Some even have provisions permitting residents to exercise outside in public spaces, so long as they keep that 6 feet of social distancing.

WUSA9 also asked the National Park Service if it should have done to limit those crowds at the Tidal Basin and receive the following response:

"The National Park Service and the mayor share the common goal of preventing the spread of COVID-19 in the city. We continue to work with the District government and follow CDC guidelines to best ensure the health and safety of the public and our employees. We ask for the public’s help in respecting these efforts to prevent the spread of the virus. Slowing the spread of infectious diseases is everyone's responsibility.”

RELATED: Cherry blossoms are at peak bloom: Here's how to enjoy them without putting yourself at risk