Artists are moving their studios outdoors, to the windows of abandoned cafés on Massachusetts Avenue, or to their latest project, the façade of Arena Stage. 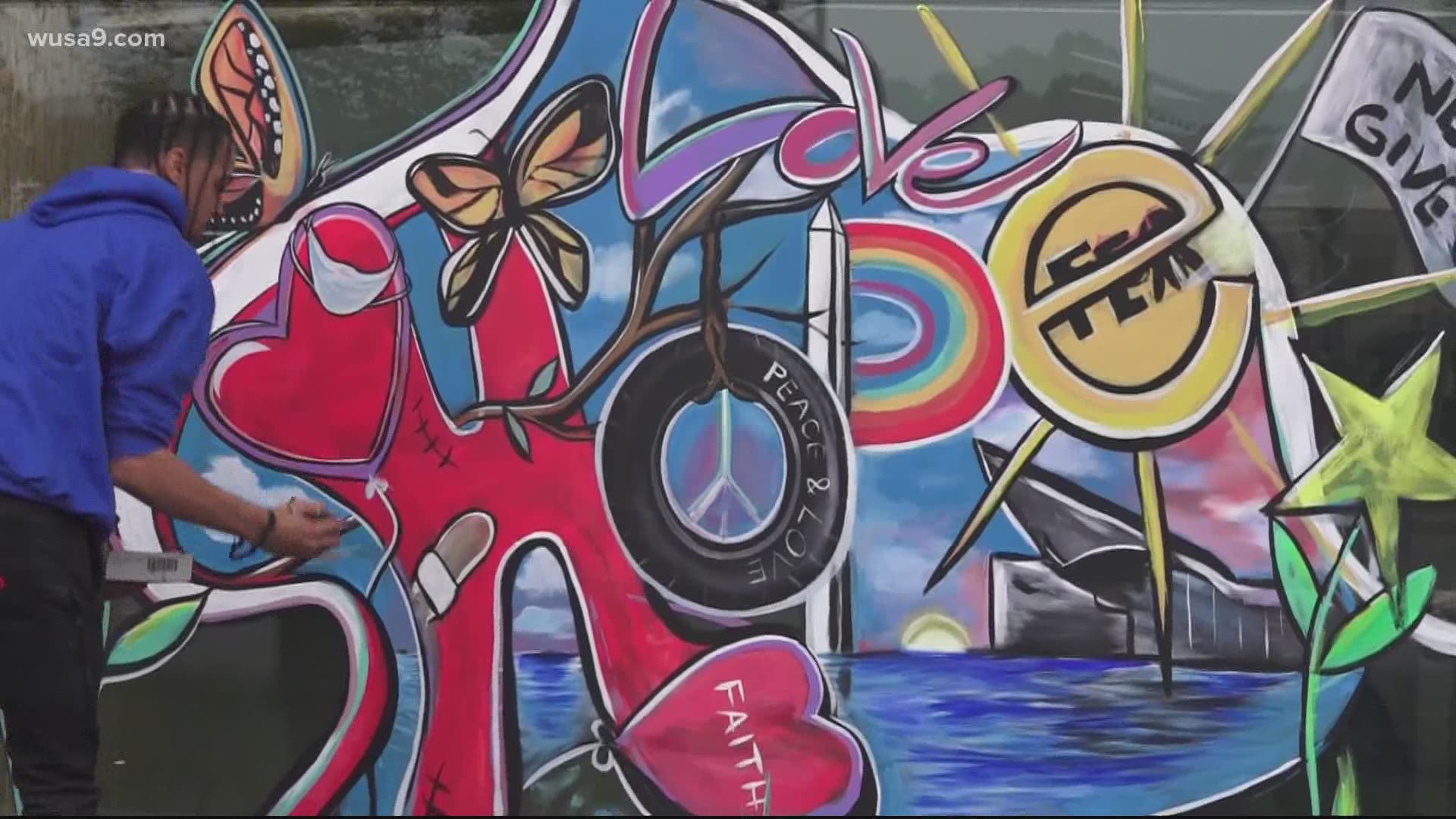 WASHINGTON — Eerie silence and iridescent storefronts are the new curious qualities coronavirus has mixed together among a growing number of empty shops, theaters and restaurants from Anacostia to Adams Morgan.

Artists inspired by the "Paint the Storefronts" movement are now moving their studios outdoors, to the windows of abandoned cafés on Massachusetts Avenue, or to their latest project, the shimmering façade of Arena Stage in Southwest.

They see glass canvases looking into empty buildings, windows reflecting now familiar scenes of families in masks, or restaurateurs in the dark, taking stock of the damage done.

But while the lively images of patrons inside are gone, the artists are now transforming windows into reflections of the hope they deeply hold – that the city and country will come back, after a stretch of great apprehension and adaptation.

"I think that art plays a special role in how we heal," painter Shawn Perkins said. "So, I think if you can inspire somebody, give somebody hope, that’s priceless."

The beauty taking shape began with a burglary in late March. When the restaurant Busboys and Poets shut down all of its locations, a man smashed a window at the renowned chain’s Anacostia location.

"It was painful, it looked like a scar on the storefront," Busboys and Poets CEO Andy Shallal said. "I painted a piece of plywood over it, but I thought, 'wouldn’t it be nice to put some positive messaging on more windows, to let people know that there’s something beyond this?'"

RELATED: Busboys and Poets in downtown Anacostia broken into

Shallal is an artist himself, and on March 31, he began recruiting more painters with the social media campaign, #PaintTheStorefronts.

The effort to beautify storefronts now employs artists who have lost gigs and paid projects, with an expanding waiting list for businesses on both sides of the Potomac to brighten their windows.

"We’ll see feedback on social media posts all the time that keep us going," artist Luther Wright said. "Someone will say they were having a very down day, and then all of a sudden, they went out on a walk, saw all this art, and our painted messages they saw were just what they needed."

"Shine your light in bright times," is one of the messages Wright painted in cursive, side-by-side with a technicolor light bulb on a shuttered Mount Vernon Square storefront.

"We will make it," frames a psychedelic heart Wright created on the next pane of glass.

"I think people are looking for threads of positivity," Shallal said. "To be able to put those in front of them, and to remind them they’re not alone, art gives people a sense of connectivity to other people, to humanity."

To request a window painting, #PaintTheStorefronts artists can be reached at art@busboysandpoets.com.