Whitman HS students posted photo of themselves in blackface, wrote the n-word on it

The school principal said the students involved will be disciplined. The event was reported to police as a hate-bias incident. 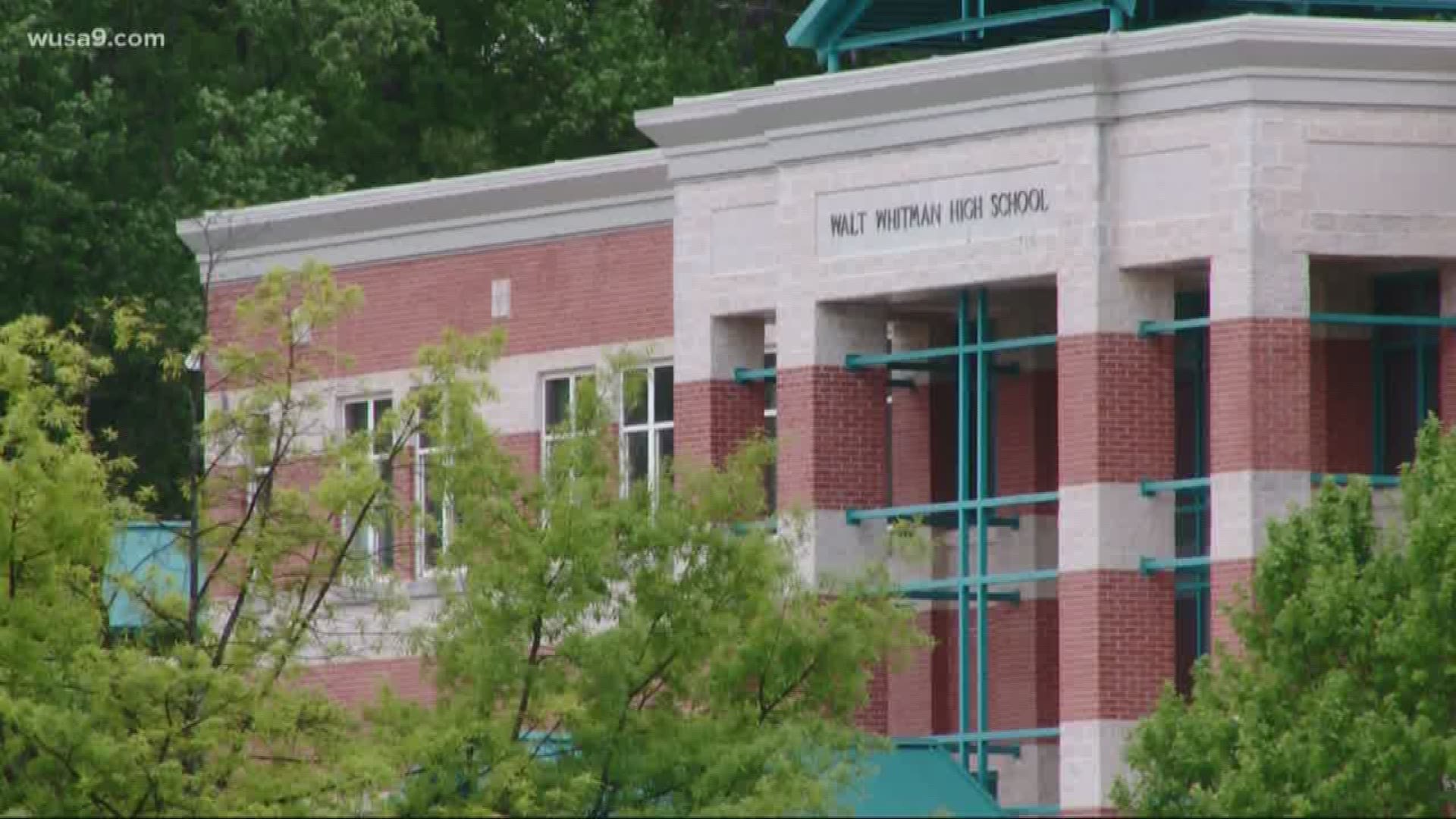 WASHINGTON – Two Whitman High School students posted a photo of themselves with blackface and wrote the n-word on it on social media over the weekend, school officials said.

In a letter to parents, school officials said the Montgomery County Police Department is investigating the post, which went out on a “private social media account but was seen by many of our students.”

Robert W. Dodd, the school principal, said in the letter the students involved will be disciplined. He said they also reported the event to the police as a hate-bias incident.

“Every student deserves to feel like Walt Whitman is their school,” Dodd wrote in the letter. “Racist incidents have a profoundly negative impact on how our students of color and their families perceive the safety, education, and support our school has to offer.”

“I'm saddened, but I'm not surprised because there's such an environment of racial misunderstanding going on,” Celia Sandbloom said. “I think it's very hard to have perspective living here sometimes.”

Students in the Minority Scholars Program at the school are doing presentations this week already on the inequities and struggles minorities experience at Whitman. Dodd said he also will be meeting with other district officials Tuesday to discuss the incident and review perception data they have gathered from students and parents this school year.

He said they will develop a plan that will “directly address racism, organizational inequities, and cultural proficiency.”

This is the latest in several recent racist incidents in Montgomery County schools.

In February, several students at Winston Churchill High School were caught handing out "N-word passes" to other students, giving them permission to use the offensive term.

In March, a fifth-grader at Bannockburn Elementary School in Bethesda found a swastika drawn on a stall in the boys’ bathroom.

Below is the full letter sent home to Whitman families:

The purpose of this letter is to inform you about an incident that occurred over the weekend involving Whitman High School students. It came to our attention that two students posted an image of themselves in blackface and used the n-word while describing their picture. The image was posted on a private social media account but was seen by many of our students. The Montgomery County Police Department were notified this morning and assisted us in investigating the use of this racist term. The image was further shared online and has been deeply disturbing to our students, staff, and parent community. I want to emphasize as strongly as possible that this type of behavior will not be tolerated at Walt Whitman High School. Students who were involved will receive significant consequences under the Montgomery County Public School’s Code of Conduct. In addition, this event has been reported to the police as a hate-bias incident.

Our efforts to build students’ cultural proficiency at Walt Whitman High School are critical and ongoing. Unfortunately, this most recent incident is another indication that this work needs to be intensified so that all of our students feel safe and valued each day. As I mentioned in my letter last week, students in the Minority Scholars Program (MSP), with the support of teachers and administrators, are presenting in math classes examples of the inequities and struggles that minority students experience at Whitman. The conversations in these initial sessions have been powerful and our students are taking a leading role. Tomorrow, I am meeting with Dr. Brian Scriven, Director of School Support and Improvement, and Mr. Troy Boddy, Director of the Equity Initiatives Unit in MCPS, to further discuss incidents of racial intolerance, review the perception data we have gathered from students and parents this school year, and ultimately develop a plan that will directly address racism, organizational inequities, and cultural proficiency.

Every student deserves to feel like Walt Whitman is their school. Racist incidents have a profoundly negative impact on how our students of color and their families perceive the safety, education, and support our school has to offer. Again, I want to reiterate that acts of racism are unacceptable and will not be tolerated at Walt Whitman. I ask that all parents discuss with their child the critical importance of respecting others, the dangers related to posting on social media, and the far-reaching consequences for both the perpetrator and those targeted by damaging racial incidents.

Thank you for your continued support. Do not hesitate to call me at 240-740-4800 if you have any questions.