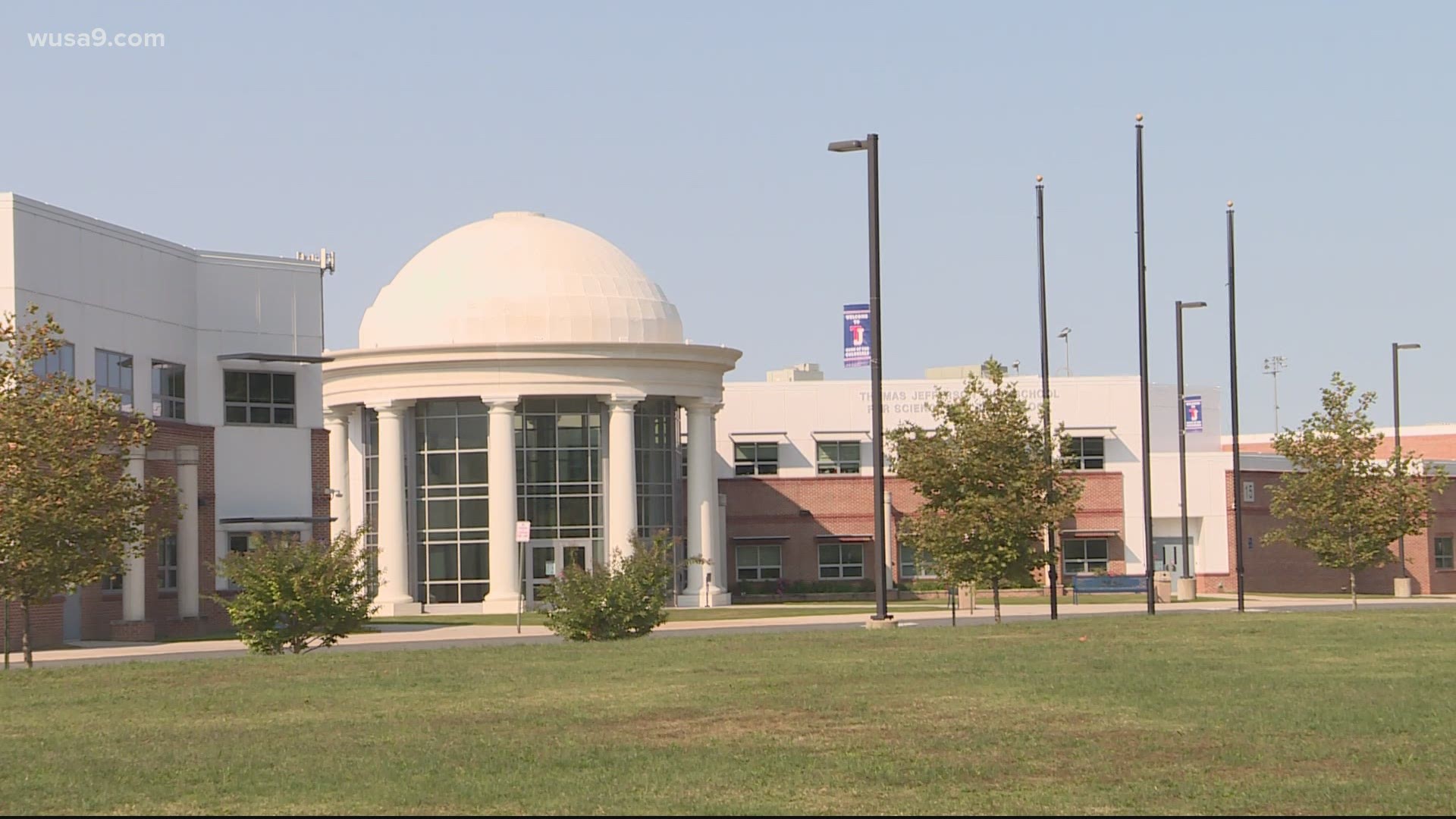 FAIRFAX COUNTY, Va. — The Fairfax County school district is considering revising its admissions process to one of the country’s top high schools, Thomas Jefferson High School for Science and Technology.

Thomas Jefferson High School for Science and Technology, in Fairfax County, is a regional “Governor’s School.” According to the Virginia Department of Education, Governor’s Schools give gifted students academic, visual and performing arts opportunities beyond what is normally available at their locally zoned school.

Despite its notoriety, there have been concerns raised about the demographic makeup of the students enrolled.

The proposed admissions policy would eliminate the admissions test, application fee and need for teacher recommendations. Instead, FCPS would look to create a “merit lottery” for Thomas Jefferson admissions that would select interested, qualified students, at random, from certain geographic “lottery pathways.”

A proposed change to the admission policy at Thomas Jefferson High School of Science & Technology, a @fcpsnews school, has led to protests.

Members of the @TJAlumniAG support the school’s switch to a lottery system and made it known outside the school today. @wusa9 pic.twitter.com/gmwXMQTNyM

“We believe that everyone has a right to be here. It's a public school funded by the general public,” Jorge Antonio Torrico, a TJ alum and FCPS parent said. “It reminds me of something that is really taxation without representation.”

Torrico is a member of the TJ Alumni Action Group, which supports the admissions proposal.

“There’s 30 years’ worth of a situation where there's Latinx, Black, students with disabilities, low-income students all underrepresented here significantly to the point where in the county there's 37% of Black and Latin combined, but we have less than 5% in this school currently," Torrico said. "There are 31% of low-income students, and there's less than two and a half percent here." 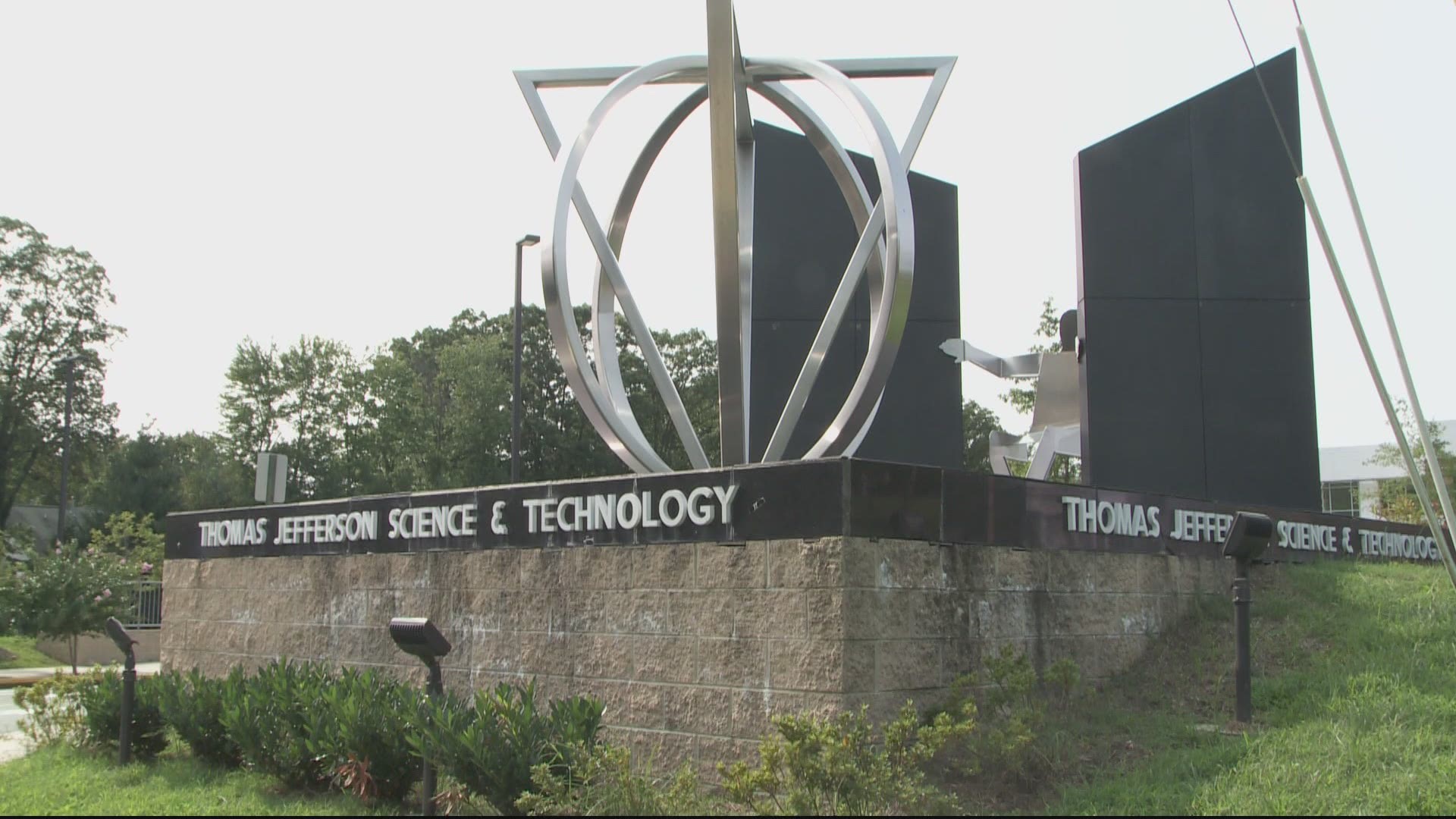 A local group named “The Coalition for TJ” has come out against Brabrand’s plan. It argues the proposal would hurt diversity at the school.

The group said it looked at demographic data and is concerned the proposal would only temporarily increase the number of Hispanic and Black students at Thomas Jefferson, while drastically increasing the number of White students there at the expense of the school’s Asian student body.

“Most of our families at TJ are Asian families and immigrant families who came to this country because we believe in the American dream of hard work and meritocracy,” Asra Nomani, a Thomas Jefferson parent and member of the Coalition for TJ said. “What a lottery does is take admission to our high school and put it in the bucket for random chance. It ultimately will not increase diversity, it will increase the number of white students at the school, and ultimately the phenomena that we have today of the American dream will be decimated.”

On Friday the Fairfax County NAACP announced its support to the proposed changes to the TJ admissions process.

"The merit lottery plan not only projects to improve admissions numbers for Black, Latinx, and economically disadvantaged students, but would also lessen the emotional burden of both being accepted and of being rejected from TJ,” the Fairfax County NAACP statement read. "Suddenly, an element of chance is involved, making the rejection less of a referendum on a child’s self-worth, and the acceptance less a badge of exclusive excellence.”

The FCPS school board is expected to make a final decision as to what it should do by Oct. 9.

FCPS said the new admissions policy at Thomas Jefferson could go into effect during the next admissions cycle if the school board decides that a change is needed.