Eating while black, and employed by Metro – woman sparks outrage after tweeting photo of WMATA employee eating on train

A Twitter user called out a black Metro employee for eating on the Red Line. The one with the complaint, not the employee, received the backlash. 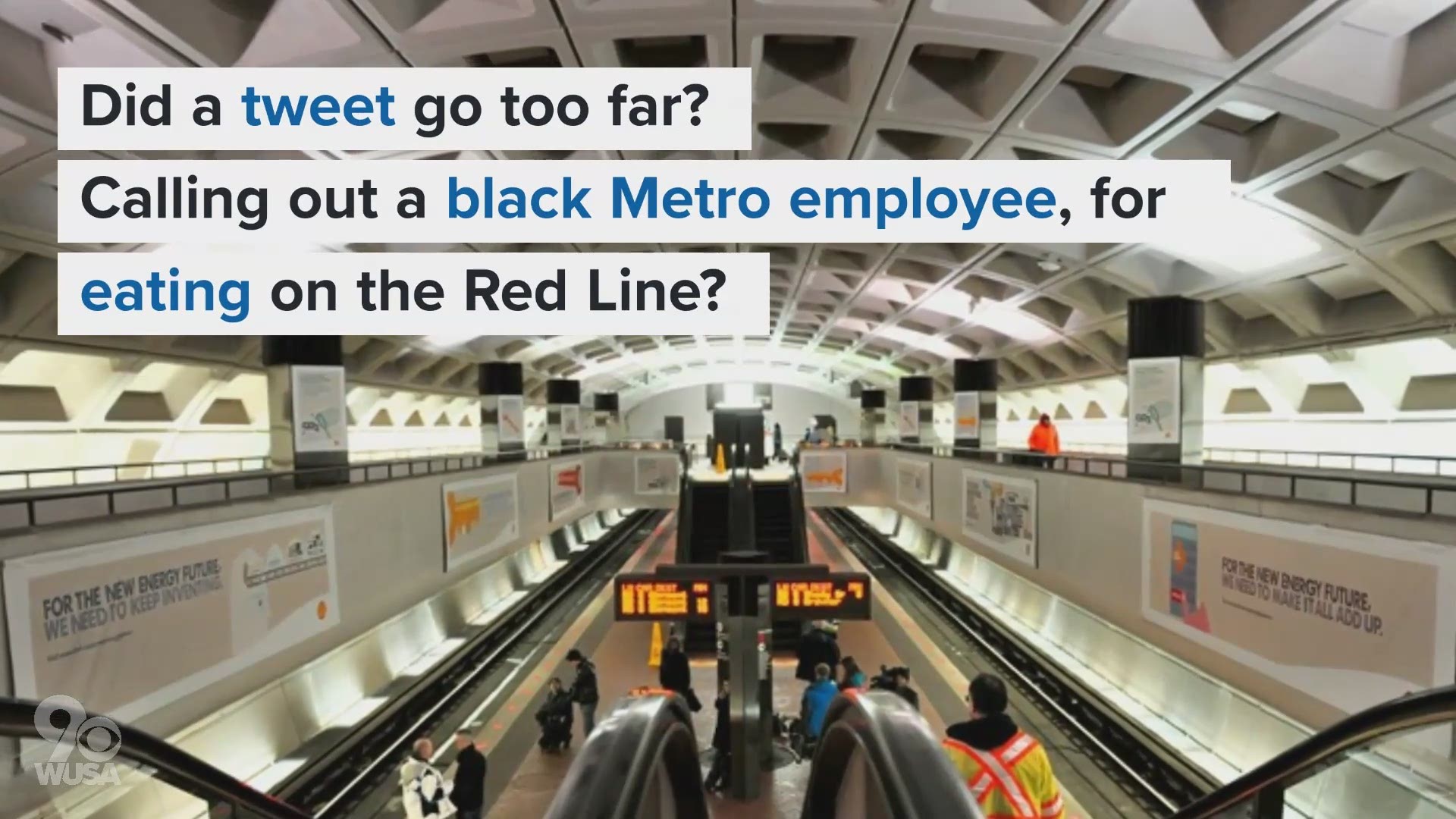 WASHINGTON – The 9 a.m. Friday tweet began, “When you’re on your morning commute & see @wmata employee in UNIFORM eating on the train. I thought we were not allowed to eat on the train. This is unacceptable.”

Writer and World Bank employee Natasha Tynes wrote her statement of apparent frustration on Twitter after photographing a black Metro employee eating. The employee was in uniform at the time. She did not appear to be making a scene, or bothering other Red Line customers.

The tweet continued, “Hope @wmata responds. When I asked the employee about this, her response was, ‘worry about yourself.’ @unsuckdcmetro.”

Credit: Twitter
Screen capture of original tweet during the 9 a.m. hour, May 5, 2019. WUSA9 has blurred the woman's face.

Ms. Tynes’ social media post did not remain confined to the two Twitter accounts. Instead, the public tweets quickly spread to thousands of people around the country.

By the end of the day, Ms. Tynes' book distribution company, Rare Bird Books, would sever all ties with her upcoming novel, and strongly urge her publisher to do the same.

People sympathetic towards the Metro employee accused Ms. Tynes of unfairly singling out a black woman, as multitudes of people have disobeyed the prohibition of eating on the Metro system.

“If no one on this app had called you out - you would have went about your business satisfied that you put that Black Woman in her place,” activist Leslie Mac wrote on Twitter. “Have you contacted her employer? Have you sought to make restitution for the damage done?”

Metro responded to the initial complaint within the hour, beginning, “Good morning Natasha. Thank you for catching this and helping us to make sure all Metro employees are held accountable. Can you confirm the time you were on the train, the direction you were headed and what line you were on?”

Ms. Tynes wrote back, “This was at around 9:00 am on the Red Line, headed to Glenmont. Thank you for responding. Appreciate it.”

The ensuing response among the public continued to be nothing short of fierce and swift.

The outrage took aim squarely at Ms. Tynes, who by Friday afternoon deleted the initial tweet.

“I apologize for a tweet I posted earlier today, which I have since deleted,” Ms. Tynes wrote on Twitter. “I am truly sorry.”

Social media accounts defending the Metro employee garnered thousands of retweets in a matter of hours, some pointing out Tynes’ subject matter of writing about minority-related issues.

“Natasha talks a lot about the challenges of writing as a minority woman, but took it upon herself to report a BW for *checks notes* eating,” wrote Twitter user Naima Cochrane. “Sis told her to ‘worry about yourself,’ and the ‘I need to speak to a manager’ jumped out.”

Another Twitter account, @tnwhiskeywoman, wrote, “You apologized for the tweet but do you understand your actions and why they were harmful? Do you understand that you wanted her disciplined for not catering to your demands? A stranger. You tried to shame her for refusing your entitlement.”

There were significantly fewer statements of support, with investigative journalist Ali Al Ahmed writing, “If that person violated the laws she is in charge to enforce, she should be held accountable. Hers [sic] eating in Metro not only violated the law but most importantly gave a bad name for black women.”

"Black women face a constant barrage of this kind of inappropriate behavior directed toward them and a constant policing of their bodies," the statement read.

WMATA said late Friday it was fully aware of the social media firestorm, and would be issuing a statement on the matter.