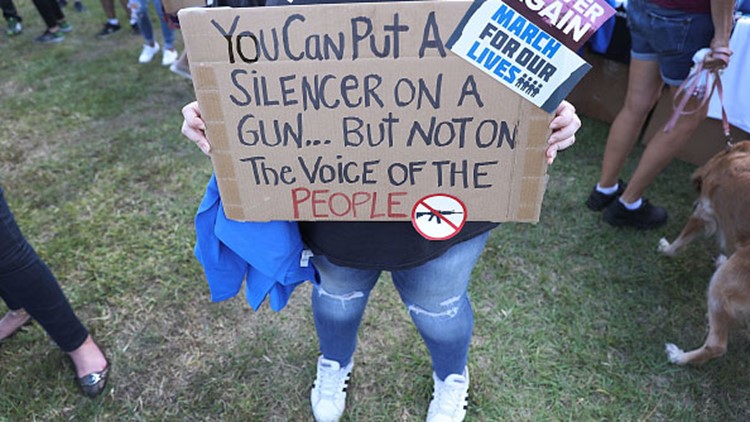 Photo by: Joe Raedle/Getty Images
Sophie Phillips holds a sign as she attends a rally for those heading to the March for Our Lives event in Washington D.C. on March 20, 2018 in Parkland, Florida.

According to a tweet, the group officially got approval to shut down part of the street in front of the National Rifle Association's headquarters in Fairfax, Virginia on August 4.
Author: Hawa Konte
Published: 12:18 PM EDT July 26, 2018
Updated: 5:14 PM EDT July 26, 2018

FAIRFAX COUNTY, Va. – The organizers behind March For Our Lives, along with the National Organization For Change, are once again marching against gun violence.

According to a tweet, the group officially got approval to shut down part of the street in front of the National Rifle Association’s headquarters in Fairfax, Virginia on August 4.

We got the approval we are shutting down the street in front of the @NRA 11250 Waples Mill Rd, Fairfax, VA 22030; This has never been done before! Thank you Fairfax County and City Police! pic.twitter.com/0I0sEm0tJb

The “National March on NRA” comes nearly seven months after 17 people were massacred at Marjory Stoneman Douglas High School in Parkland, Florida on February 14, 2018. The mass shooting sparked the March For Our Lives rally that brought a reported 800,000 people to D.C. on March 24, 2018, to demand the end of gun violence and mass school shootings.

RELATED: March For Our Lives

Ever since the march, participants have been committed to keeping the movement going.

Organizers are expecting a lot of people to attend the August 4 march and said it is the first time the road in front of the NRA has ever been shut down.

According to their website, "National Org. For Change and March For Our Lives will team up and show our politicians that we refuse to accept gun violence as an unsolvable issue. Now it’s time to turn our energy into action."