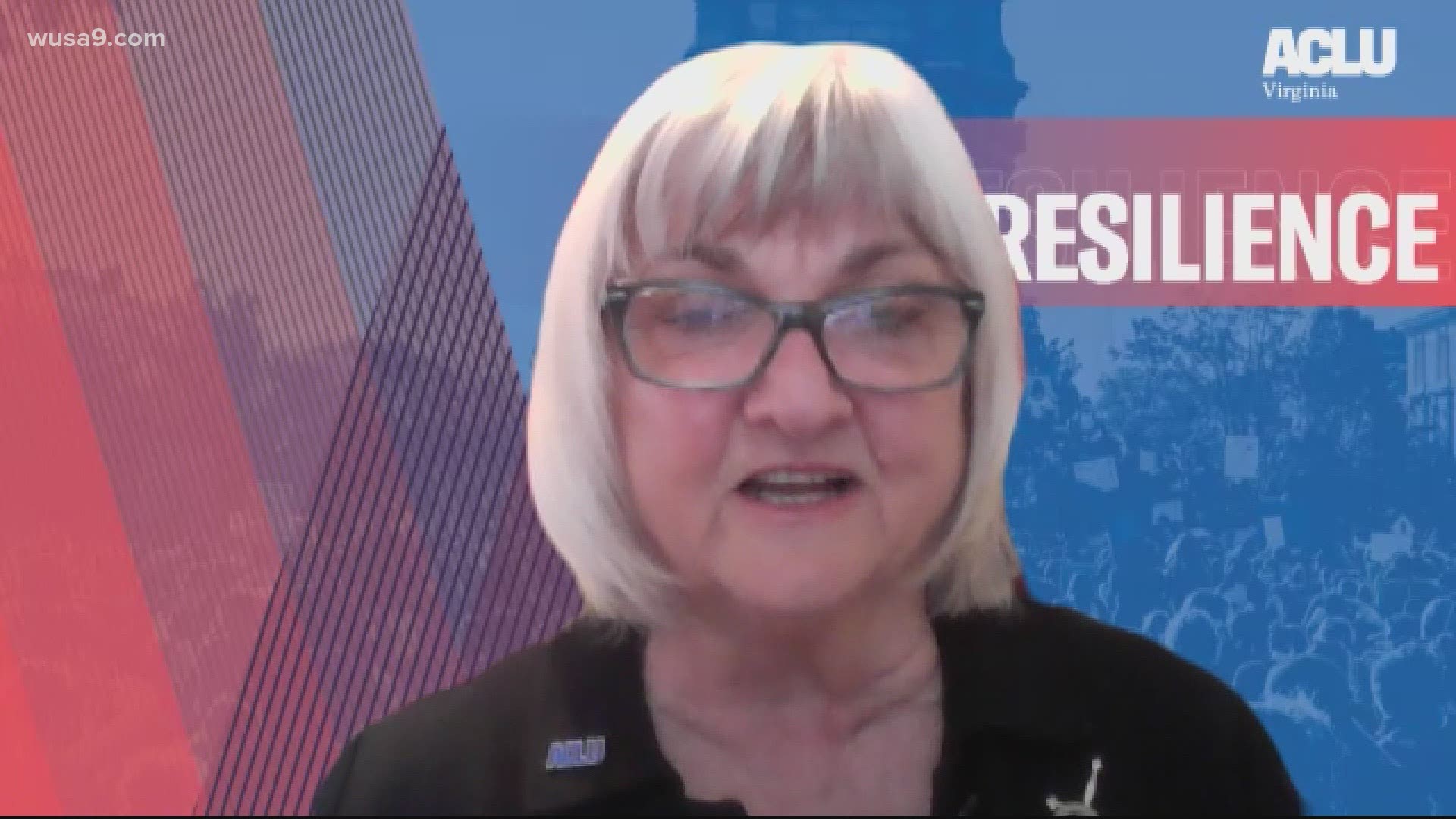 WASHINGTON — A jury found former Minneapolis police officer Derek Chauvin guilty of all charges Tuesday in the May 25, 2020 death of George Floyd. The jurors deliberated for less than 12 hours before Chauvin was convicted of second-degree murder, third-degree murder and second-degree manslaughter. He faces a maximum of 40 years in prison for the charges.

Almost immediately after the jury delivered their verdict in open court, the nation began reacting to the news with opinions on what this case could mean for policing and the justice system as a whole.

"Justice has been served with the guilty verdicts against former Minneapolis police officer Derek Chauvin," Prince George's County State's Attorney Aisha Braveboy said in a statement. "We can never forget watching the shocking and horrific video of George Floyd suffer under the knee of Chauvin for 9 minutes and 29 seconds, as he struggled to breathe, as he called out for his dead mother and as he shared his love for his daughter. The incident not only led to days of unrest in this country, but has forced us to once again confront the issues of racism, inequities in policing, use of force and the need for reform."

However, many others urged Americans to continue the fight for racial justice.

"Today, a jury in Minneapolis did the right thing," former President Barack Obama said in a statement. "But if we're being honest with ourselves, we know that true justice is about much more than a single verdict in a single trial ... While today’s verdict may have been a necessary step on the road to progress, it was far from a sufficient one. We cannot rest. We will need to follow through with the concrete reforms that will reduce and ultimately eliminate racial bias in our criminal justice system. We will need to redouble efforts to expand economic opportunity for those communities that have been too long marginalized."

Today, a jury did the right thing. But true justice requires much more. Michelle and I send our prayers to the Floyd family, and we stand with all those who are committed to guaranteeing every American the full measure of justice that George and so many others have been denied. pic.twitter.com/mihZQHqACV

Attorney General of the District of Columbia Karl Racine said Tuesday's verdict highlighted what the justice system looks like when it does its job, while pointing out what he called its "many failures."

"George Floyd’s murder reinforces how our law enforcement system, for all its successes, still has so many failures – including that it fails to fully address the systemic racism that has seeped into it in large and small ways,” Racine said. “While this decision may provide some solace, it will not heal the wounds of generations of mistreatment. But perhaps it’s part of a reckoning of a new era of reform. Fair and just policing should be standard – and we know it is for many hardworking law enforcement officers who keep us safe. But we also know far too well that people of color are often treated differently. And it can lead to life-changing and life-ending consequences. We have a great deal of work to do to end these injustices.

The senseless murder of George Floyd served as yet another reminder that we still have a long way to go to live up to our nation’s highest ideals.

Justice has now been served, and we hope that this verdict will bring some measure of peace to the Floyd family and the community.

Maryland Rep. Anthony Brown (D) said this verdict is just the beginning, and that real change is going to take persistent advocacy on Capitol Hill.

"I’m hopeful that it might be the inspiration we need to do the work that is required," Brown said. "Unfortunately, if the past is any indication of what might happen in the weeks and months ahead, I’m not overly optimistic."

Like many we spoke to tonight, Maryland @RepAnthonyBrown says this verdict is just the beginning. He believes real change is going to take is persistent work and advocacy on Capitol Hill https://t.co/j9howfP13i

D.C. Mayor Muriel Bowser called attention to the collective trauma the Black community was forced to experience every time Floyd's death was discussed.

"I send my love and peace to every Black American who has struggled to make sense of a senseless situation," Bowser said. "We send our love and prayers to the family of George Floyd. And we pray that we are able to build America to be true to itself and deliver liberty and justice for all.

2/ The pain of witnessing this tragedy has caused significant trauma. We must continue to talk about it and share love and support for one another at this critical juncture.

"The heartbreaking truth is this is one case that was caught on video and shared by a bystander," Jawando said in a statement. "A tragedy that, unfortunately, is not unique. Too often systems of injustice that are supposed to protect life, do the exact opposite.

Guilty. Guilty. Guilty. My statement on the #DerekChauvinVerdict. Rest in Peace and Power #GeorgeFloyd. We continue the struggle for justice in your memory. ✊🏾💪🏾🙏🏾 #BlackLivesMatter pic.twitter.com/cVcaNm4S9W

Several leaders pointed out that regardless of what justice is derived from the guilty verdict, nothing can fix the loss that Floyd's family will live with every day.

"The conviction of Derek Chauvin will not bring George Floyd back, it will not make his family whole, but it will send the message that somewhere in America justice can be achieved," Montgomery County Executive Marc Elrich said in a statement. "Hopefully, it will mark a turning point that liberates prosecutors and juries to administer justice regardless of the profession of the accused. There is no doubt that George Floyd was murdered despite posing no threat to the officers who surrounded him or the members of public who looked on in horror. It wasn’t just excessive force; it was lethal force, and it was unnecessary."

The conviction of Derek Chauvin will not bring George Floyd back, it will not make his family whole, but it will send the message that somewhere in America justice can be achieved.

Maryland Attorney General Brian Frosh said his office has been tasked by the General Assembly to investigate all police-involved deaths in the state.

Many of the members of the D.C. Council added their voices to the national conversation as well.

"Victory is not seeing law enforcement murder Black people- not wondering if the murderer will be held accountable," At-Large Councilmember Robert White Jr. said. "I wish we didn’t have to rejoice for justice, but today I’m glad justice came."

Chauvin #verdict is guilty on all charges. This is justice, but it is not a victory. Victory is not seeing law enforcement murder Black people- not wondering if the murderer will be held accountable. I wish we didn’t have to rejoice for justice, but today I’m glad justice came.

This verdict brings accountability, but it's not justice. There is no justice in a system where an officer can murder a man by kneeling on his neck for nine minutes unimpeded. Justice would be #GeorgeFloyd still being with his daughter and fiancée right now. Our work continues...

Relieved by the jury’s decision to deliver accountability. The work to reimagine public safety in DC and across the nation continues. pic.twitter.com/nZA56nEwBU

That exhale many feel is real, but it’s for one case, one murder. While this is so important to see a jury convict what was plainly in front of them, it doesn’t change in & of itself all that is wrong & that needs to change. Accountability may be served, but justice demands more.

1 / 11
AP
London Williams, 31, of Harrisburg, Pa., bursts into tears on Tuesday, April 20, 2021, in Washington, after hearing that former Minneapolis police Officer Derek Chauvin was convicted of murder and manslaughter in the death of George Floyd. (AP Photo/Jacquelyn Martin)