After admitting he planned to carry out ISIS-inspired attack at National Harbor, man pleads not guilty

A Montgomery County man pleaded not guilty Monday, after he admitted to law enforcement that he intended to carry out an ISIS-inspired truck attack. 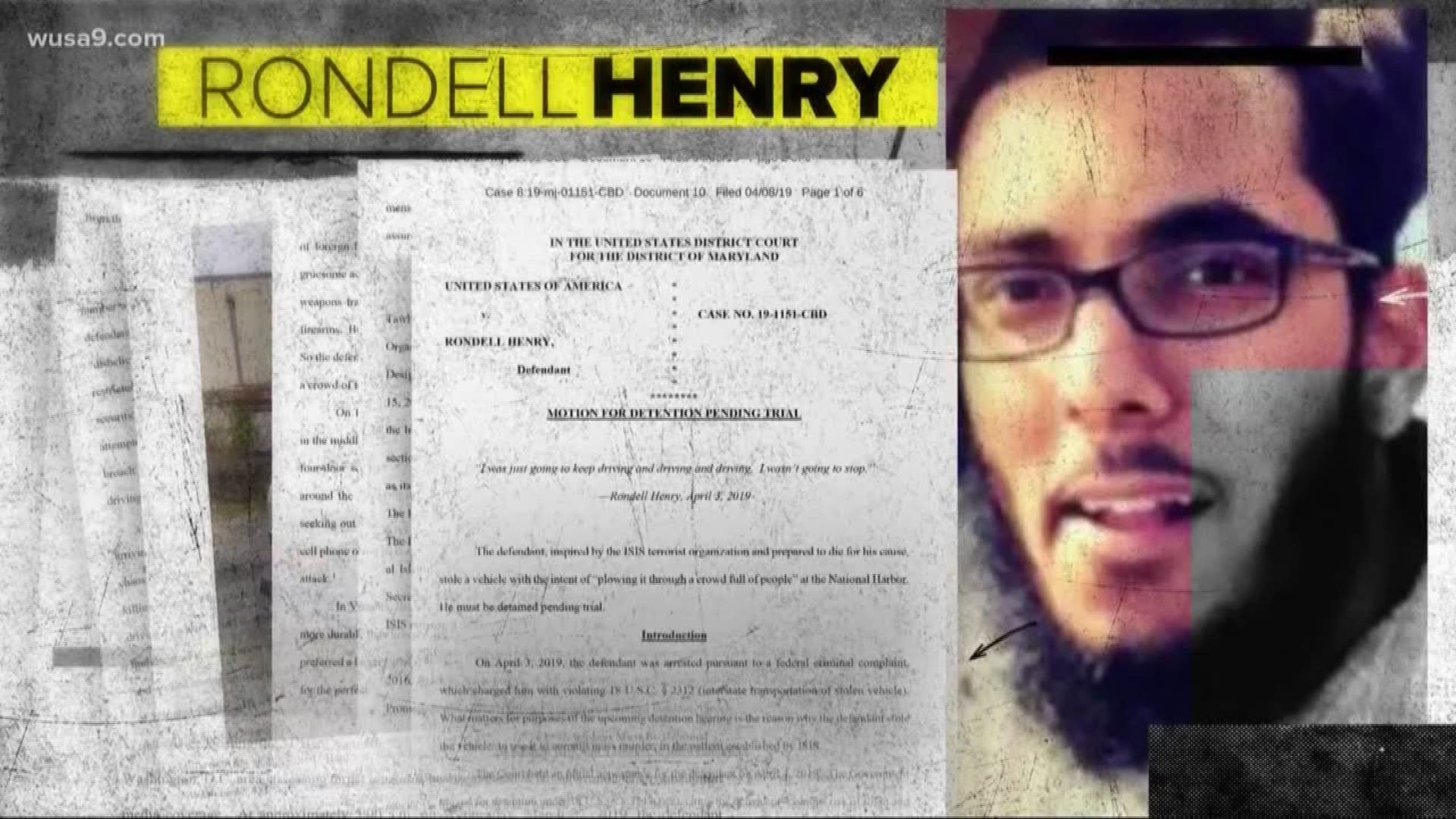 GREENBELT, Md. — Weeks after he told the FBI he was going to drive into crowds of people at National Harbor, Rondell Henry signaled he intends to fight the first federal criminal charge brought by prosecutors so far.

Henry, 28, pleaded not guilty to interstate transportation of a stolen vehicle, after he admitted to law enforcement that he intended to carry out an ISIS-inspired truck attack.

The incriminating statements are laid bare in court papers and in sworn testimony from an FBI special agent.

After his March 28 arrest at National Harbor, federal prosecutors said Henry painted a disturbing picture of his desire to recreate the July 2016 ISIS attack in Nice, France.

The truck attack on the French Riviera killed 86 people on Bastille Day, with hundreds of others wounded along Nice’s famed Promenade des Anglais.

Henry said he harbored a “hatred” for “disbelievers” over the past two years, referring to people who are non-Muslims.

“Henry admitted that he stole the U-Haul and drove it to National Harbor,” said FBI Special Agent Michael Fowler in an April 3 affidavit in support of the criminal complaint.

Prosecutors added that Henry described in his own words how he wanted to create “panic and chaos,” the “same as what happened in France.”

Authorities also said the Germantown resident made the incriminating statements after he was read his Miranda rights, informing Henry of law enforcement’s ability to use anything he said against him.

“The quotations and statements of the defendant’s planning and purpose herein come from those incriminating statements,” prosecutors said.

The chain of events enacting the plot allegedly began Tuesday, March 26, when Henry walked off his job in search of a large vehicle to steal.

Henry then drove his BMW from Montgomery County to Alexandria, where he followed a U-Haul truck and stole it after it was parked.

The following day, court documents based on Henry’s statements said he waited at Dulles Airport for large enough crowds to target, but he only found a small number of people around 5 a.m.

After he unsuccessfully tried to enter the Dulles security perimeter for two hours, Henry then made his way to National Harbor. He then waited in a boat overnight for large enough crowds to amass.

By the morning of Thursday, March 28, Prince George’s County Police coordinated with federal and local law enforcement to locate the truck. They then arrested Henry as he jumped over a boat dock security fence.