Planning for retirement? Check out these cities. 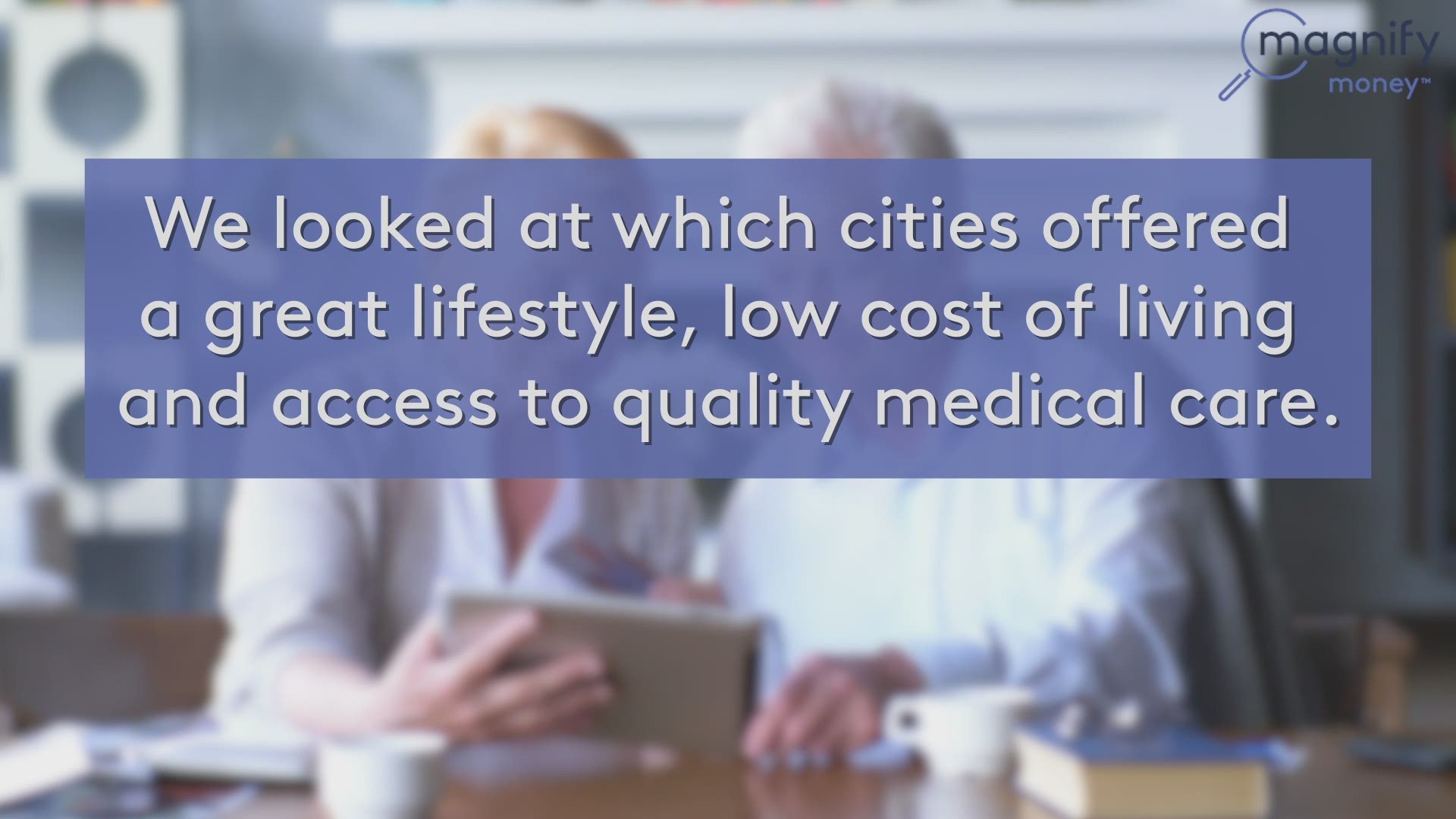 In a new study, MagnifyMoney looked at the 50 largest metro areas in the U.S. to determine the best places to retire in 2018. We ranked the metros based on four key factors. Each metro was given a score out of 70 possible points.

The four major categories considered were assisted care availability and quality, medical quality and cost, cost of living and lifestyle.

The assisted care availability and quality score was based on the number of Medicare-registered home nursing service providers, nursing home beds and continuing care retirement communities per 100,000 people, as well as the Medicare scores of those providers and communities.

The cost of living score was based on the median monthly housing cost for both renters and owners, and the regional prices of goods and services. Seniors work with fixed incomes that do not see cost-of-living bumps in annual salaries.

The lifestyle score was based on the volunteer rates of people 55 and older, the rate of physical activity in metro areas and the percentage of residents 65 and older who moved into the metro area that year — insight into how desirable the location appears to retirees.

The best 3 cities for relocating retirees

Portland’s average monthly housing cost is $1,236, which is above the average for the cities in this survey, but the costs of goods and services are below the national average. Portland also has the second highest medical quality and cost score of all the metro areas in the survey, right behind Seattle. Portland lost ground in the availability of assisted care service, with less than one nursing home provider per 100,000 residents — which isn’t rated well by Medicare.

Only 1.5% of Salt Lake City’s seniors moved to the city from elsewhere, despite the many advantages the metro area has to offer. The average health care cost per Medicare patient in Salt Lake City is $8,914, below the $9,627 average for the 50 cities in this survey. One contributing factor may be that the city has the lowest rate of preventable hospital visits of the cities surveyed. The area also boasts a higher-than-average percentage of seniors participating in volunteer activities. But like Portland, Salt Lake City could improve its assisted care quality and availability, which was below the average for the survey.

Denver’s lifestyle score was well above the survey’s average, which has to do with the high percentages of physically active seniors and the fact that Denver has the fourth highest percentage of seniors who move to the city from elsewhere. Its medical quality and cost score was above average for the surveyed metro areas, and the city had the third lowest rate of preventable hospitalizations. But, monthly housing was above the national average at $1,285, and, like with the two previous cities, Denver could improve its assisted care offerings.

Miami comes in above average on assisted care availability and quality, and the cost of living is reasonable. But Miami also has the highest average cost per Medicare enrollee of any city in the survey, topping $11,582, and has the fourth lowest rate for preventative care. Miami also had the lowest rate of volunteering seniors. Many other popular Florida locations came in toward the bottom of the list, including Jacksonville (32nd) and Orlando (40th).

Houston has the lowest assisted care availability and quality score of all 50 of the metro areas surveyed. The city has fewer than one home nursing service provider per 100,000 people and fewer than 295 beds per 100,00 residents — the 50 metro average is 463.3. On top of that, the nursing homes that are available have the lowest Medicare ratings of any metro area surveyed.

New York City has the highest costs for goods and services of any metro area in the survey and the housing costs average at $1,528 per month. Only 16.2% of seniors volunteer, and the health care score was below the 50 metro average score. But there are two bright points for the Big Apple: The assisted care availability and quality score is just above average, and seniors get a reasonable amount of exercise.

Moving and retirement are two major life events that can have a wide-ranging impact on your fiscal, emotional and physical health. Nancy K. Schlossberg, author of several books including “Revitalizing Retirement: Reshaping Your Identity, Relationships and Purpose,” made a career studying these kinds of transitions. Her biggest piece of advice to retirees is to be patient.

“When you retire, you leave a role, relationships and daily routines,” she said. “There’s a period where you’re establishing a new role in life, new routines and relationships. That period between leaving the old life and starting the new life can be very bumpy. Remember, give yourself time.”

If retirees are considering relocation, Schlossberg recommends taking an extended vacation in the city of interest to give themselves a chance to see if it’s the right fit. Schlossberg lived and worked in Washington, but retired to Sarasota, Fla., where she had spent many summer vacations, but the transition was still difficult.

“I thought it would be a piece of cake, but it took longer for me to adjust than I expected,” she said. “I said once when I first moved there, if I could invent patience pills I would make a fortune.”

When you do settle on a new city, Schlossberg recommended using all the resources available to get involved and learn about the community, including the local paper, chambers of commerce and community colleges. Research the availability of lifelong learning options, cultural events and sports or exercise venues.

The post The Best Places to Retire in 2018 – TEGNA appeared first on MagnifyMoney.

MagnifyMoney is a price comparison and financial education website, founded by former bankers who use their knowledge of how the system works to help you save money.