'If it's not uncomfortable, you're not doing diversity, equity or inclusion' | Black Women's Equal Pay Day forum

We are 226 days into 2020, and it's an important day for Black women. Why? Our QandA team explains in a roundtable discussion. 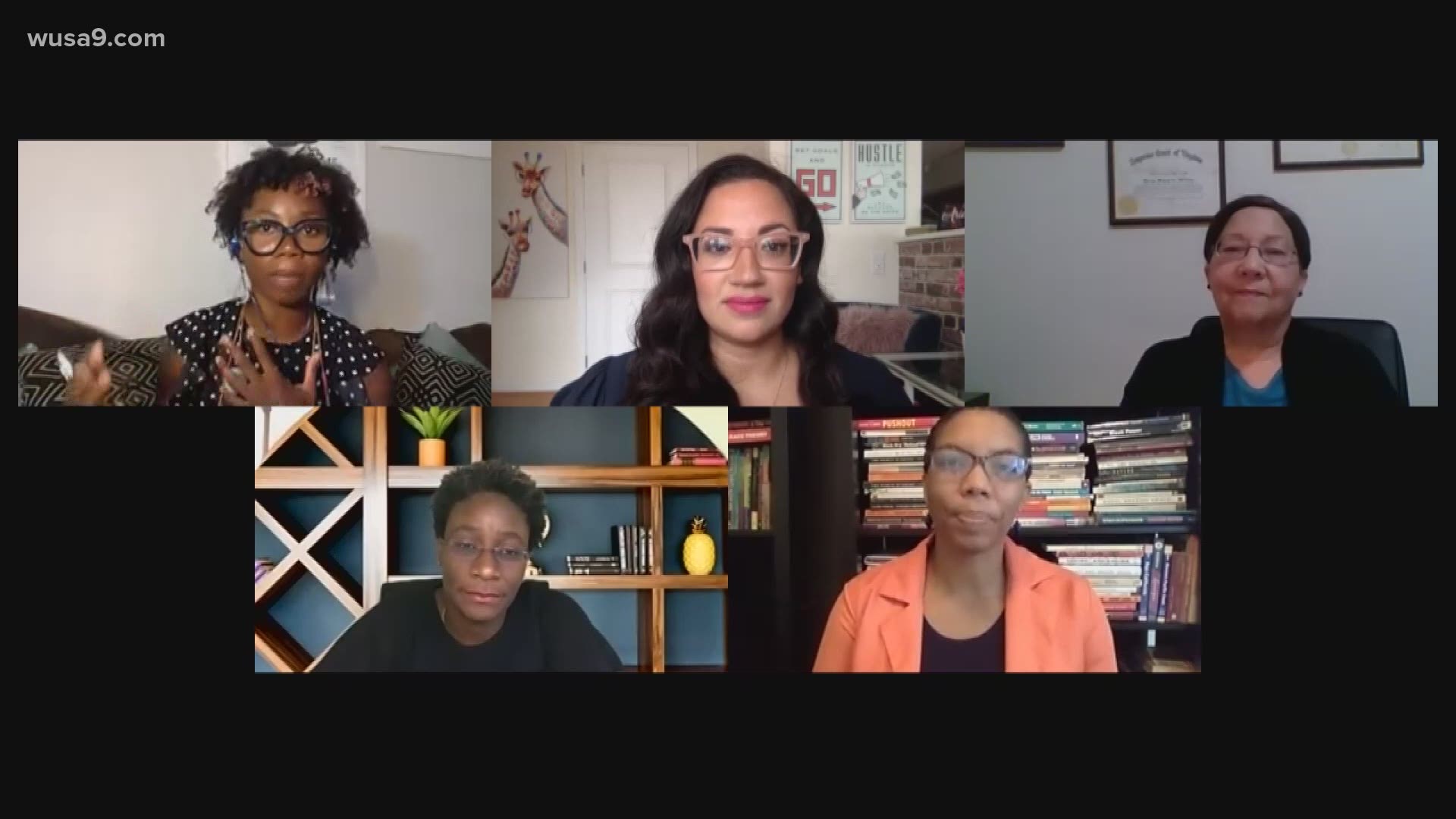 WASHINGTON — We are 226 days into 2020, and it’s an important day for Black women. Why? Because they had to work those extra 226 days, just to make the same amount of money their white male counterparts did in 2019.

According to Equal Pay Today, on average, Black women typically make just 62 cents for every dollar paid to white, non-Hispanic men. That fact may be new to some people, but it is a reality for the Black women that comprise 17% of the population in D.C.

WUSA9 asked a group of women with expertise in labor rights, human resources, economic justice programs and mentorship programs to join Ariane Datil from #TheQandA for a candid discussion about the intersectionality of race and gender in the workplace, and how it impacts the ways that Black women are able to navigate and advance their careers.

Sheri Davis: Co-Director WILL Empower -- an apprenticeship program for women in an early career stage that are involved in labor and economic justice organizations.

Here's an excerpt of our conversation, edited for length and clarity:

HAZEL-ANNE: "So I think [we have to make] it a place where it's psychologically safe for your employees to say 'this is not okay' and creating the kind of environment within your organization where it isn't just on your Black employees to speak up and say, 'that was wrong, okay.' It is important for our white allies, and those who want to be allies, to push back against this and to be able to call out those microaggressions and micro-inequities as they see them. Interrupt them, if you will. Because it can't just be on the Black employees to create a better environment, it has to be a wholehearted effort."

TAMI: "The things that follow Black women at every stage of their career are packaged in the system of oppression...of racial oppression. And so even when we reach the highest class, we are still not being treated as our counterpart. So we may be seen as successful...but when you look at men or white women and we look at the economic measures, and social measures and cultural measures, across those identities, we find that Black women, even when we're at the highest ranks, are not being treated the same way in any of those senses."

MARGO: "I’m a certified mediator. I mediate employment disputes. And a large portion of them involve claims of racial discrimination. And those conversations are uncomfortable, they just are. The employee feels marginalized. They believe racism is a factor. The manager wants to say, 'I'm not a racist' and gets very defensive. It's uncomfortable for everyone. But what I'm seeing recently is very encouraging. Probably because we all watched George Floyd get killed right before our very eyes, but employers are recognizing that what goes on out in society does directly impact their employees. They're reaching out, they're being proactive and they're having these discussions. There's a way to do it safely and to be productive and not to be, you know, scary."

TAMI: "If it's not uncomfortable you're not doing diversity, equity or inclusion. I'm just gonna flat out say that."

SHERI: "Oftentimes we want to talk about diversity and inclusion, but we don't want to talk about exclusion. And what I've learned along the way, is that as long as we talk about including people, it feels safer than when we talk about the exclusive systems that have been set up on purpose. And that it has been built not only into the structure but also into the culture. So whether it's a person that comes in, and feels like, 'hey I don't identify as a racist' or 'I do' they do learn that what success means, what is valued, they learn those things, just from being in an organization that was set up with an exclusive model. The challenge is to be able to say let's put this in a historical context. Let's put this in the political context. What is the purpose of the organization? Why was it founded in the first place? Who founded the organization? Did they (the corporation) have in mind someone like me working there? At any point? Was there a struggle for someone who looks like me to work in the organization? And then once that person came in, did it change the situation? Did it open up? Did that person have support or, or the power to be able to make decisions that would suit a fundamental shift or transform that organization?"

ARIANE: "I think something that people don't think about is the fact that the internship process for some people can be very exclusive. And if you can't afford to move to a city where you want to further your career, you don't have access to those internships."

SHERI: "First off I want to acknowledge that WILL Empower is a co-directed program, and my co-director is Lane Windham. She's at Georgetown University and she directs the apprenticeship program. We used to laugh about D.C. staffers and the idea that like anybody could be a D.C. staffer. But it was like, D.C. is so unaffordable. To think that you could come here, without your parents being able to pay for you to live, eat and do everything off of the very small salary that is offered to a D.C. staffer is absurd."

HAZEL-ANNE: "As an HR program director for undergraduate students, part of what I do is I help them with the internship process when they're going through it. But I think it's really important to acknowledge how many organizations, especially for-profit organizations, offer unpaid internships. And they skirt the line of the law with it. They then expect the interns to do whatever, and it's just a thing we do. But I think we have to challenge that thing we do. Because then how does that disproportionately affect women of color?"

TAMI: "I only would add to that, that it's not just the point of entry where workers of color, Black women, anyone who's in a marginalized identity is facing an obstacle. We need that throughout our careers and we need to have access to the networks. To - number one - know about the internships. And number two, have the economic capacity and other structural capacities to take advantage of the opportunity. I like to say 'the opportunity to take advantage of the opportunity' is part of the justice conversation we need to have."

It's Black Women's Equal Pay Day: We're talking about race and gender in the workplace, and the inequities that come with that. What micro-aggressions or micro-inequities have you faced over the years?

ARIANE: "I want to go to one of the comments [from facebook live]. This is from Donna Callaway and she says: 'In my work, my career, you were immediately dismissed if you discuss your salary with fellow employees.' This is such an important conversation, because if you don't know what people make, how do you know what you should earn?"

HAZEL-ANNE: "I think that that speaks exactly to what we need organizations to be changing in terms of their policies. Why is it secret? So if they can answer that question credibly, then we can talk. But I think they need to be doing internal pay equity studies. Why are people being paid disproportionately? And the other thing to think about, especially today on Black Women's Equal Pay Day, is why are you asking for salary history? Why are you paying attention to that? That is irrelevant to what the job is at your organization and what you should be paying people for the job."

TAMI LEE: "Well if I could just step in and just (from a legal perspective) say that for private-sector workers, it is in fact your lawful right to discuss with other workers your wages, hours and working conditions. It's called the National Labor Relations Act. But just because we have the right to do it doesn't mean that employers don't often violate that right. So you can, in fact, be illegally fired for banding together to talk about your salaries. But you then have a right of action."