Flint Hill School students took up the project to help Numa Osuna, who suffered a debilitating stroke at the age of seven. 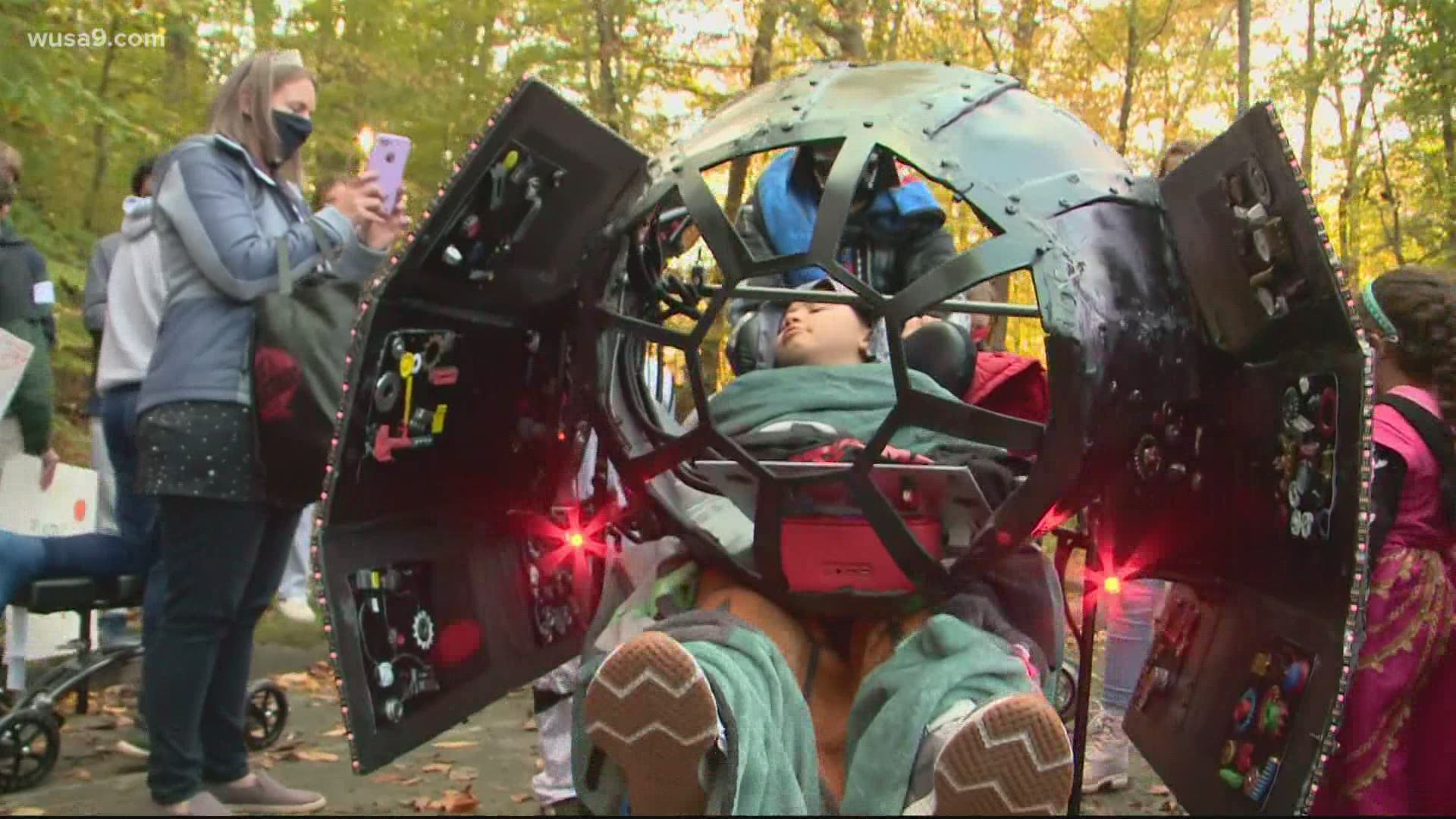 SPRINGFIELD, Va. — This will be a memorable Halloween for the Osuna family of Fairfax County.

On Friday, the family received a special gift for their 11-year-old son, Numa. Numa grew up a fan of the Star Wars movie saga, according to his mother, Maria Vera. She said the sci-fi flicks were so popular in their home that Numa even danced on camera to the movie’s theme song.

“The last book that he was reading, that summer of 2016, was about Darth Vader,” Vera said.

However, at the age of seven, Numa suffered a debilitating stroke. His mother said it left him blind and confined to a wheelchair.

The Osunas said they have worked to bring joy to every part of Numa’s life since his stroke occurred four years ago. Vera said that was part of the reason their family decided to request the help of a nonprofit organization named “Magic Wheelchair” earlier this year.

“We promised him that, no matter what, he is going to have a beautiful life,” she said.

Magic Wheelchair builds custom costumes for kids in wheelchairs. In September, the group reached out to science teacher Chris Cook, of the Flint Hill School, in Oakton.

He said Magic Wheelchair told him it had a job for him and his students to do.

“They gave me a call this year and said, ‘we have a family for you to work with and they need a costume by Halloween,'" he said. “And, I went, ‘okay, sure, month and a half. We can do it’”.

.@flinthillnews students, with the help of @MagicWheelchair, surprised 11-yo Numa Osuna with a Star Wars themed costume for his wheelchair in Springfield today. Four years ago, Numa suffered a debilitating stroke. More on @wusa9/11p. pic.twitter.com/m5a3xgSATD

Cook said the next day he took measurements of Numa’s wheelchair. He said after that he and his students, some as young as thirteen, got right to work.

“I spent a lot of time working on [the costume],” 14-year-old Flint Hill School student Evan Demsey said. “Probably, like, 50 plus hours.”

Demsey and his classmates got the chance to show Numa and his family the results of their labor the day before Halloween.

Cook’s class gathered on a street in the Danbury Forest neighborhood of Springfield. They stood around an object covered by a black cloth.

The class then pulled the cloth off the object in front of the Osunas and more than 30 of their family members, friends, and neighbor. The item that was revealed: a tie-fighter modeled after Darth Vader’s space vessel in Star Wars.

“It was just incredible seeing everyone come and witness this thing, this small thing that we've done,” Demsey said.

The Osunas immediately wrapped Numa’s wheelchair in its new cover. It came equipped with buttons that simulated the sounds of lasers and space-cutting missiles.

Cook said he hopes his students' effort will inspire others to help children in need.

“The more people get to see people doing nice things and good things to make the world a better place, the more people will be encouraged to do it,” he said.

The Osunas added the Flint Hill School’s gesture is one they will never forget. Numa’s father, also named Numa Osuna, said it was fitting people came to the aid of his son.

“The thing he wanted to do is help people," he said.