Loudoun County Animal Services said this is very out of the ordinary and very concerning. 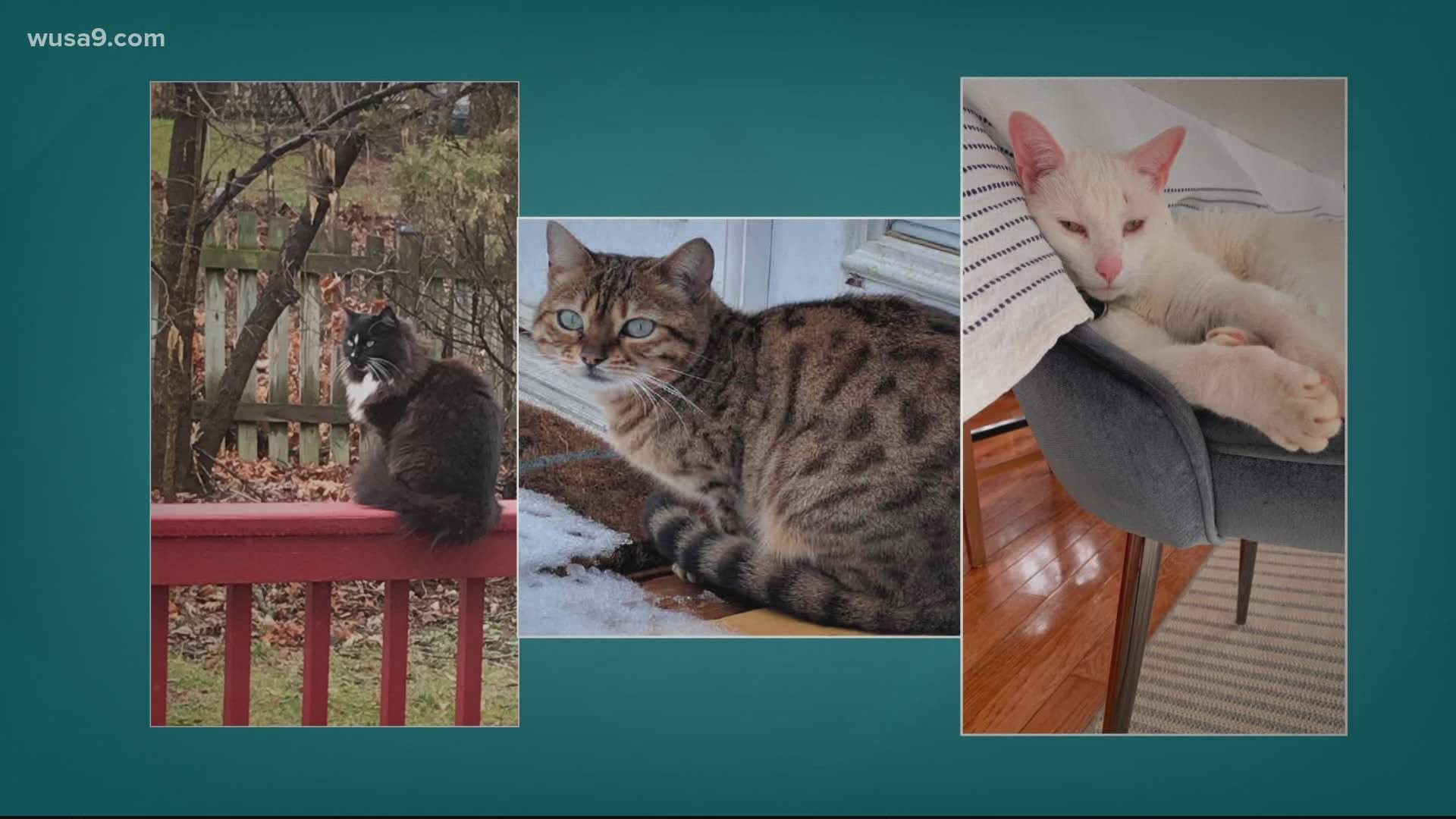 LOUDOUN COUNTY, Va. — Three pet cats have been shot within a month in Loudoun County, according to Loudoun County Animal Services.

LCAS official Chris Brosan said all three cats were shot not far from their homes in broad daylight. All of the cats have survived.

"Over the last month we've had three separate incidents where cats have been shot, which is extremely out of the ordinary for us," Brosan said. "Typically in a year's time we may see one of these incidents, so to have three within a month is very concerning for us."

Brosan noted the shootings have been in three separate parts of the county as well. The latest cat to be shot was the Parkinson’s family cat, Hope.

Kate Parkinson said Hope went outside after breakfast, as she normally does, and a few hours later showed up on the doorstep unable to walk.

"She couldn’t use her back legs, she was dragging it and she was in severe pain, bleeding," Parkinson said.

Credit: WUSA
Parkinson said she took this photo after finding Hope outside with gunshot wounds.

She said at first she didn’t know Hope had been shot, so when she got the news of what caused her injuries she was stunned.

"The doctor called me 30 minutes later and said it looks like a shot wound, from a gun," Parkinson said. "I was just in complete shock. I couldn't process what she was saying. I felt like I was having a panic attack. My cat being shot by someone was the last thing that I thought would be wrong with her."

Hope is the third cat since April 8 to be shot in Loudoun County. The first was in Hamilton, and Brosan said the owners heard the shot ring out. LCAS said the cat suffered gunshot wounds to the face and body.

Credit: WUSA
LCAS said the cat was shot with a shotgun near the family's home.

"With the pandemic going on and people at home, I know that other agencies that investigate domestic violence are seeing a spike in those types of incidents," Brosan said. "I don't think that we're any different in terms of animal crimes and I think that people need to understand that if animals were being injured, chances are there are people being injured as well in conjunction with these crimes. We want people to understand that this is a community-based issue not solely about the welfare of the animals, although that is our primary concern."

Parkinson said she doesn’t know who shot her cat, and said Hope is extremely beloved in her neighborhood.

"I sincerely hope that even if it was an accident, then that person is brought to justice and brought to the knowledge of the damage that he's done to our family, the fear that's come into the community, and the heartache and the pain that it caused for my sweet kitty,” Parkinson said.

Despite all of the emotional turmoil this act of violence has had on her family, Parkinson said there is some good news to Hope’s story.

It started, Parkinson said, when she and her husband were trying to figure out how much it would cost to save Hope’s leg and do reconstructive surgery instead of amputation. She said the cost of surgery would be around $5,000, a price that put her family in a frenzy to figure out what they could financially do.

Credit: WUSA
Parkinson said Hope would be undergoing reconstructive leg surgery on Thursday after it was shattered by a bullet.

As Parkinson began texting her neighbors to warn them to be on the lookout, one neighbor asked if she could chip in to save the cat’s leg. Parkinson said before she knew it, the community was coming together to raise funds for Hope.

"By the time we had to decide if we can we afford to amputate it or keep it we had already raised about $1,000 and we knew that was the answer -- we were keeping her legs," Parkinson said. "Thanks to the community, friends and family -- and honestly mostly strangers -- that heard this story and were just horrified by it and have rallied to make it a community cause."

Parkinson said her sister created a GoFundMe and within 24 hours had raised all the money they needed for Hope’s surgery.

"It's brought the community together, and I am just grateful she gets to keep her leg because of how active she is, and how she's not the kind of cat that just sits around and sleeps all day long," Parkinson said. "She wants to be with anyone else, to communicate, connect and love on people."

Credit: WUSA
Parkinson said staff at the veterinarian clinic Hope is staying at have said she's a cuddly and sweet cat, despite being injured.

Parkinson said Hope was undergoing surgery on Thursday and is expected to go home on Friday.

If you have any information about the cats that have been shot, please call animal services 703-777-0406.