A long-simmering dispute escalates with neighbors screaming slurs in a late-night tantrum caught on a Ring camera. 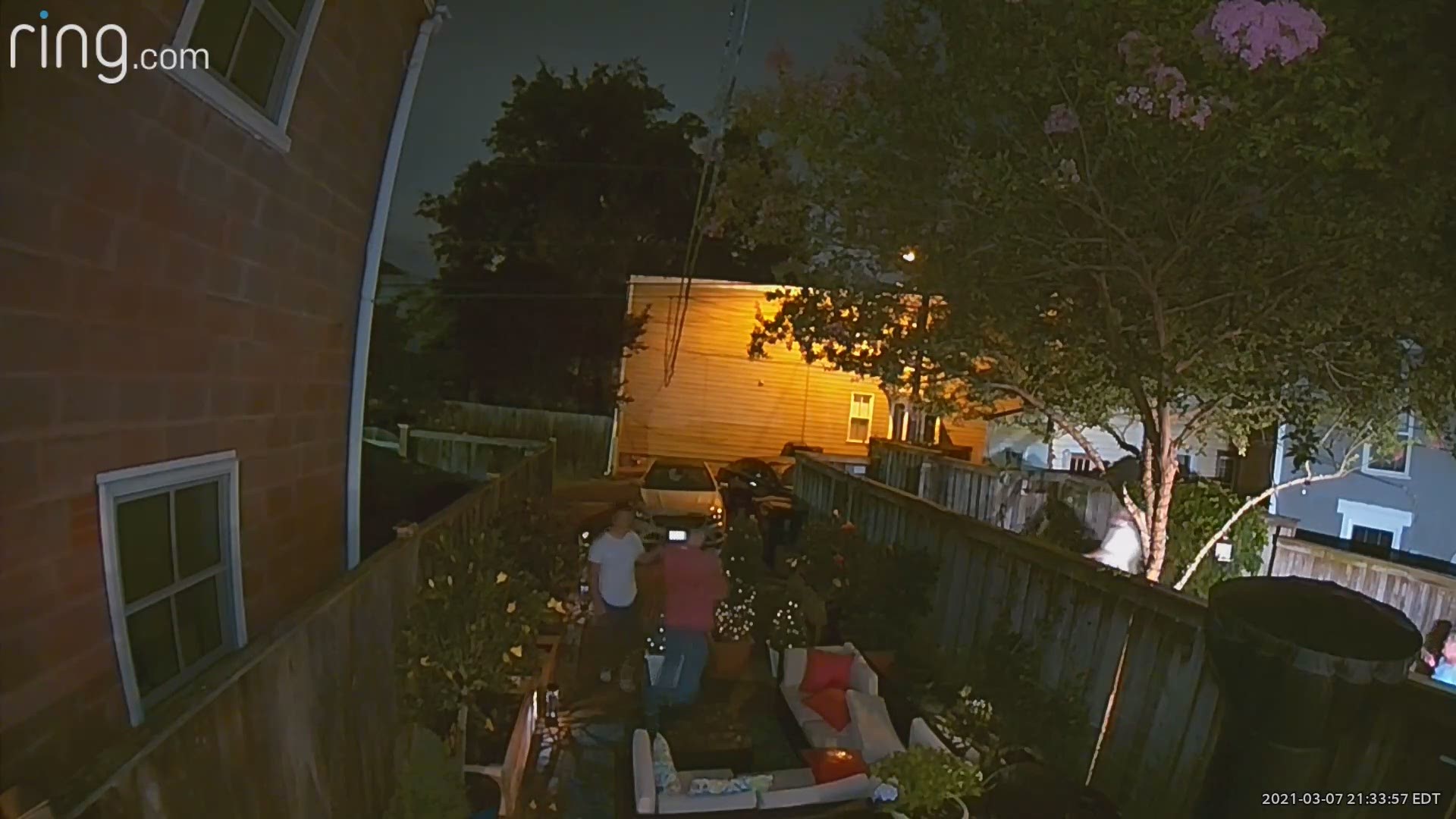 ALEXANDRIA, Va. — Neighbors say they've never heard anything like it anywhere. Vile anti-gay slurs caught on a Ring camera hurled at a gay couple in the heart of Old Town Alexandria. Anti-Asian slurs too. All in a long-simmering dispute over a back alley parking space.

The white couple caught on tape insist they're not anti-gay or anti-Asian, but
the language is pretty rough.

"What am I?" Kyle Metz said, after coming out in his backyard after hearing a crash Saturday night and thinking someone had his car, he said.

"B*** buddy," Wood screams back at him in the video, as he launches into a long tirade.

It happened just off Duke Street after the Woods struggled to get their Tesla into the parking space behind their house and then lashed out at their next-door neighbors, Kyle Metz and Leo Liu Metz.

"Oh no, we love LGBT. I want you to BLEEP him every night," Jim Wood yells on the tape.

"I'm from rural Iowa," 35-year-old Kyle Metz said. "Even in rural Iowa, I've never experienced anything remotely like this."

The couple said they've posted their Ring videos of the incident and shared them on social media because they say they fear for their own safety and their other neighbors' safety.

They called Alexandria Police, and a spokeswoman said police are investigating.

When the neighbor on the other side of the Woods' house, Julia Kennedy, asked them to stop harassing the Metz's, Wood started screaming profanities at her.

"You fat a*** w***, Yeah, really. What's your issue?" he said, running over to her side of the fence. "I see you out the window having sex with your girlfriend all the time."

Kennedy said Wood told her he has "multiple recordings of [her] in [her] apartment having sex."

Legal experts say despite the proliferation of security cameras, you have a legal expectation of privacy inside your own home.

"People should be able to feel safe and comfortable in their own home. I just want it to stop," said Kennedy.

Metz accused the Woods of tossing anti-Asian slurs in an earlier confrontation. "They say I spread COVID. I spread social disease. I'm Asian and that was very hurtful," said Leo Liu Metz.

Jim Wood told me that Kyle Metz tried to punch him during the confrontation, but that was impossible to see in a videotape from his Ring camera.

The Metz' deny it. "Absolutely not," said Kyle Metz. "We would never hurt anybody and hit him, no," said Leo Liu Metz.

Mary Wood blames the whole thing on the Metz's. "We're not anti-gay. As a matter of fact, on the tape, my husband says he loves LBGT. He just thought they were an embarrassment," she said.

The Metz's have gotten an emergency protective order against the Woods. The Woods say they plan to countersue.