Hundreds gathered to pay their respects to a woman that served as an icon to many, leaving flowers and lit candles to honor her legacy. 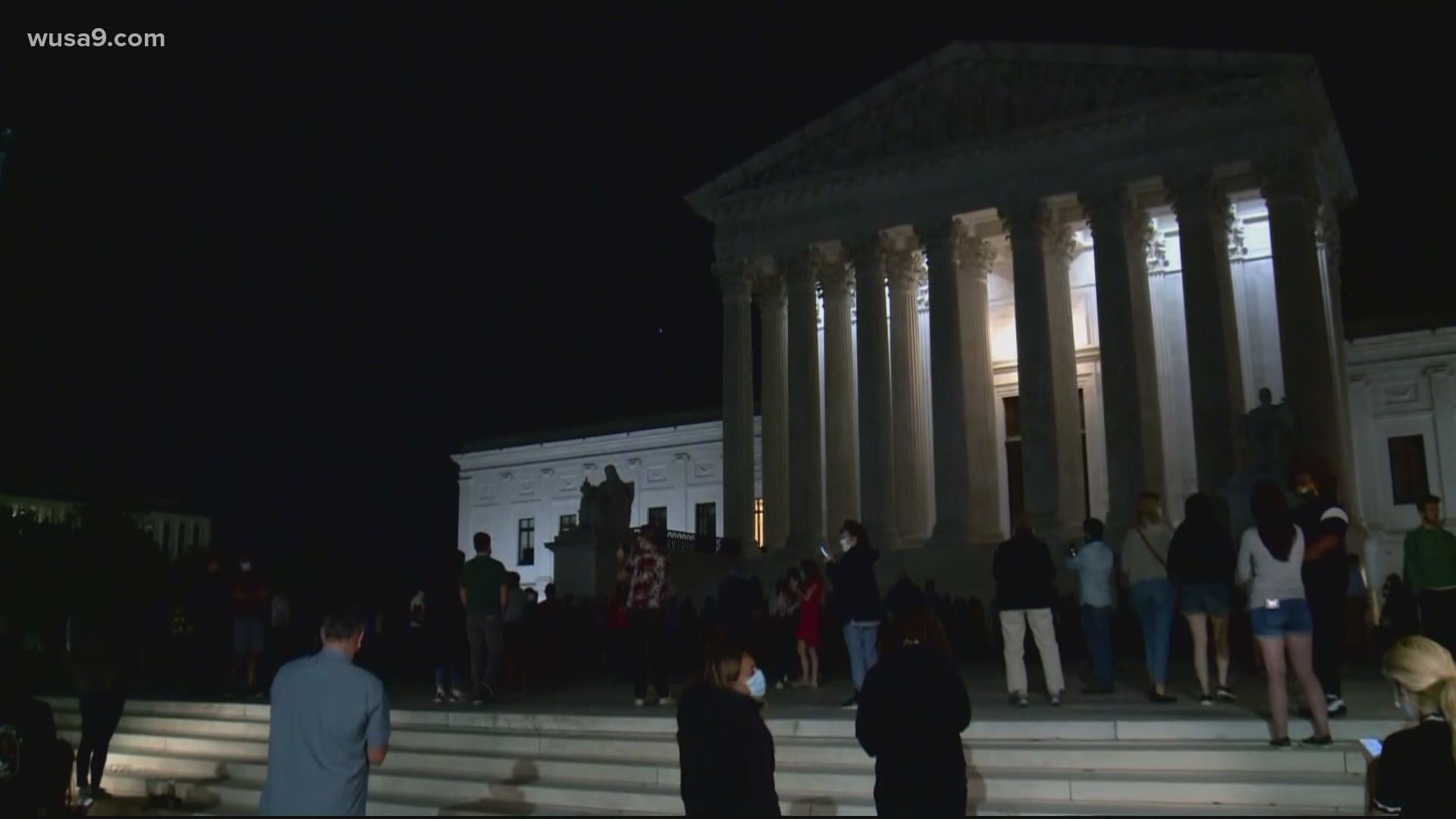 WASHINGTON — Just as the Jewish New Year began at sundown, news broke that the Supreme Court's longest-serving Jewish justice had passed away. Justice Ruth Bader Ginsburg has died of metastatic pancreatic cancer at age 87, according to the U.S. Supreme Court.

The outpouring of emotion was immediate and intense as Washingtons came to the Supreme Court building, to mourn together. Hundreds gathered to pay their respects to a woman that served as an icon to many, leaving flowers and lit candles to honor her legacy.

"We’re all here to honor her and it’s a very solemn kind of quiet, but grateful atmosphere here tonight," mourner Amy Colpo said. "She was such a voice for women, myself included. I feel so much of what I have today and this country is because of her and the ideals she fought for."

Credit: WUSA9
Crowds gathered outside the Supreme Court to honor the death of Justice Ruth Bader Ginsburg. Some lit candles, others left flowers on the steps, but the overall mood was reverent.

Kendra Lamy brought her small children to the Supreme Court steps to bear witness to the moment in history.

"It’s such a historic day that 10 years from now, when we live so close to the capital and so close to the Supreme Court, we felt like we’re going to want them to know that they were here," Lamy said.

Like many, D.C. Mayor Muriel Bowser took to social media to share her memories of the fallen justice.

"We have lost a champion of justice, an icon and patriot, a woman who lived the concept of building a more perfect union," Bowser tweeted. "Justice Ruth Bader Ginsburg fought for us until the very end, and it is that fighting spirit –that we were fortunate as a nation to benefit from time and time again – that made us love, respect, and admire her. Tonight, we are heartbroken."

The words "No. No. No." were trending on Twitter for several hours following Ginsburg's death, with thousands reflecting on her legacy and expressing worry over what her death means in the current political climate. 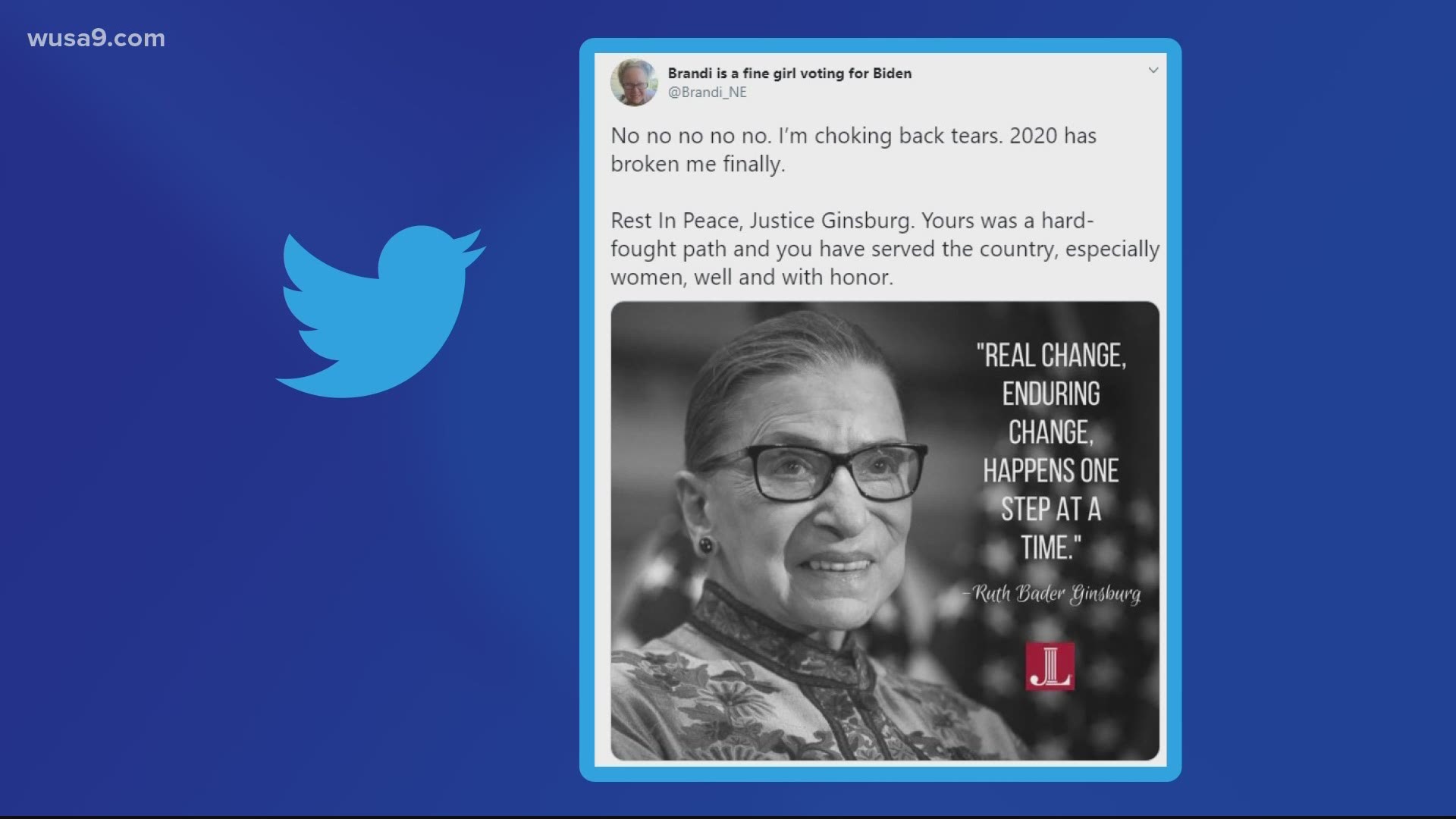 Though the gathering remained largely peaceful and reverent in nature, tensions flared for a bit when several men with bullhorns showed up arguing that it was "a good day for America," and agitating the crowd paying their respects to Ginsburg.

"Elections have consequences," the men said. "President Trump will put a new justice on the Supreme Court."

“This is a good day for America.”
“Elections have consequences.” @wusa9 pic.twitter.com/Qt3m1qlwrT

Some conservative activists have made their way to the Supreme Court and have raised trouble with the crowd that came out to pay their respects to #RBG. @wusa9 #RIPRGB pic.twitter.com/CUva8r1Uze

Ginsburg's death cast an immediate spotlight on the vacancy on the high court. Just over an hour after the news of her death broke, Senate Majority Leader Mitch McConnell vowed to bring President Donald Trump’s nominee to a vote. In his statement, McConnell declared unequivocally that Trump’s nominee would receive a vote, even though the Republican-controlled Senate did not give President Barack Obama’s pick a vote in the months ahead of the 2016 election.

The Senate and the nation mourn the passing of Justice Ruth Bader Ginsburg and the conclusion of her extraordinary American life.

Appointed to the nation’s highest court in 1993 by former President Bill Clinton, Ginsburg was the oldest sitting member on the court. Despite a lengthy career on the court, she had never missed arguments until January 2019. She was a champion for women's rights and played a pivotal role in the fight for LGBTQ rights, ruling with the 5-4 majority in 2015's landmark marriage equality case.

Ginsburg was one of nine women in a 500-person class at Harvard Law School and was the second woman ever appointed to the high court, fighting against gender discrimination and expressing support for the #MeToo movement.

In the days before her death, Supreme Court Justice Ruth Bader Ginsburg dictated a statement to her granddaughter that focused on her desires.

“My most fervent wish is that I will not be replaced until a new president is installed," Ginsburg said to her granddaughter Clara Spera, according to NPR.

Ginsburg leaves behind her daughter Jane and her son James. Her husband Martin died from cancer in June 2010, four days after their 56th wedding anniversary. She's also survived by several grandchildren. 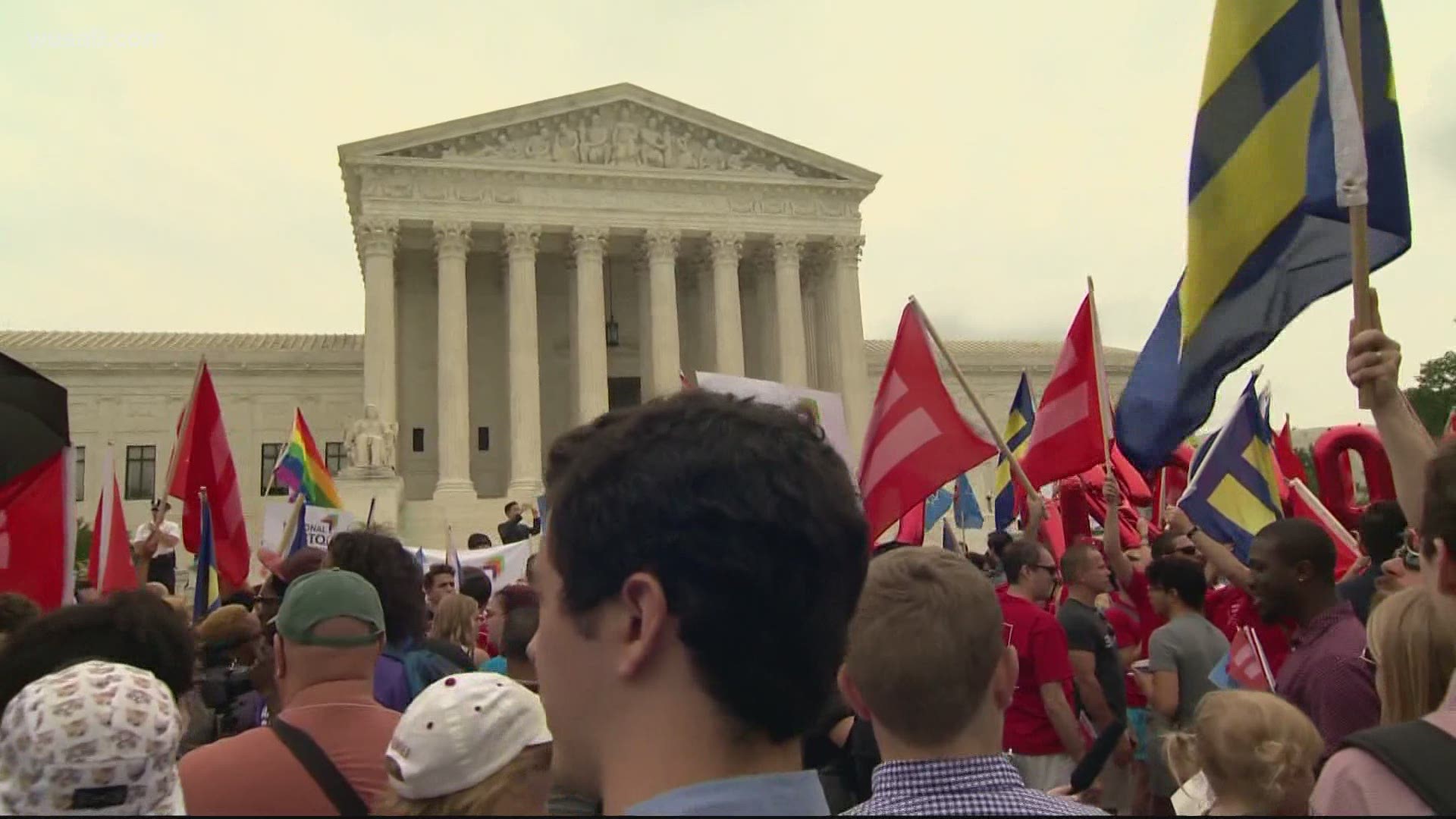