Masked neo-Nazis had a surprise march through DC, MPD says masks were legal

After video of the event spread, civil rights activists and legal observers asked how the demonstrators were not in violation of the District’s anti-mask law. 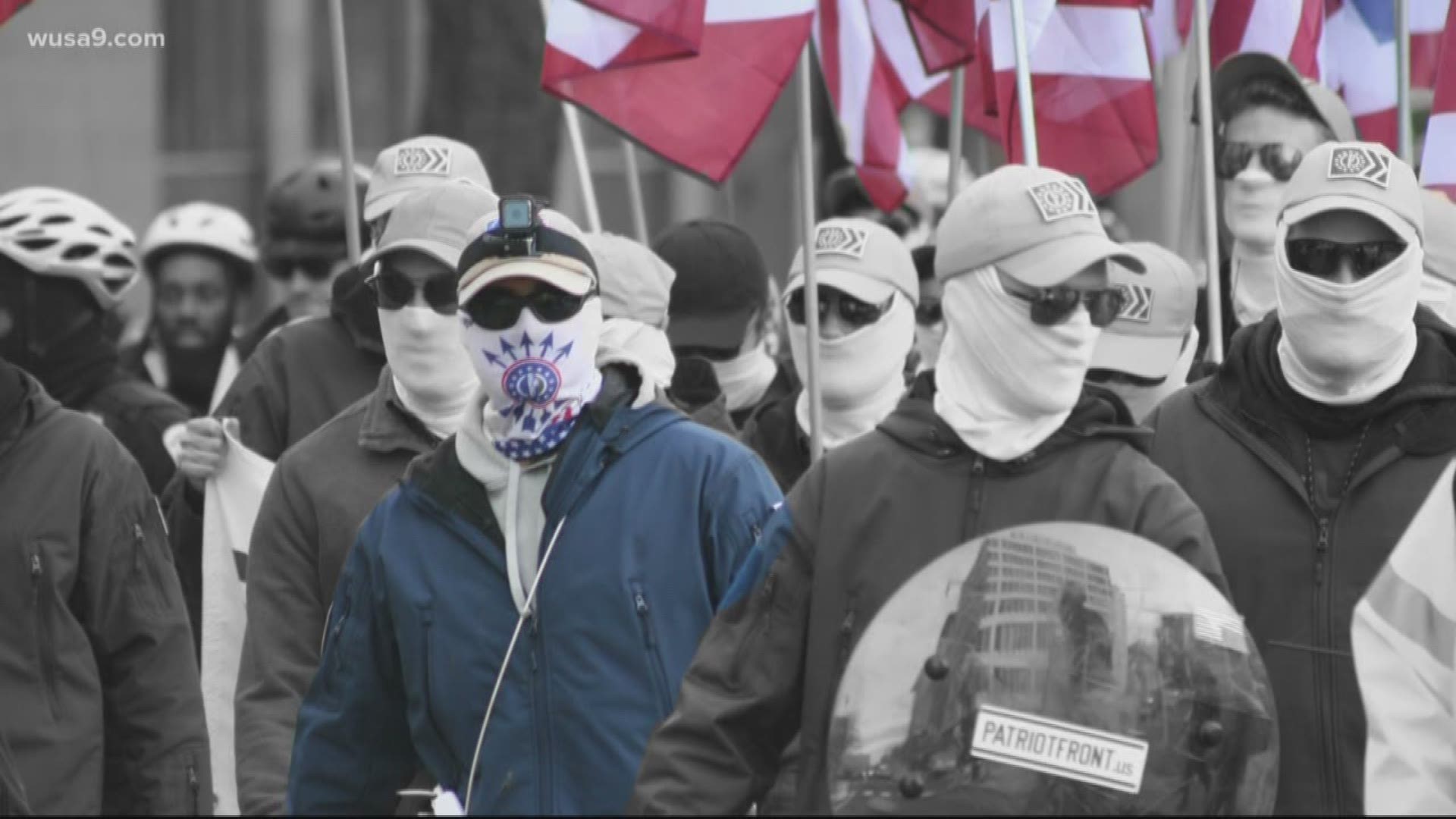 WASHINGTON — In an unannounced demonstration through U.S. Capitol grounds and the National Mall, masked neo-Nazis issued a clarion call to their cause, as stunned tourists and neighbors looked on.

Members of the white nationalist group known as "Patriot Front" shouted chants of "reclaim America," as they crossed Constitution Avenue. Their yells echoed against the stately buildings of the government they seek to remove.

"These people are neo-Nazis from Charlottesville who killed Heather Heyer," a counter-protester said, referring to the 32-year-old activist murdered during the August 2017 Unite the Right march. "Do not let them into D.C."

Patriot Front is defined by the Southern Poverty Law Center (SPLC) as an image-obsessed hate group, founded in the aftermath of Charlottesville.

Around 150 members of the organization were difficult to miss on an otherwise tranquil afternoon – young and middle-aged men wearing matching khaki pants, white face masks, black sunglasses and khaki hats.

But after video of the event spread on Twitter, civil rights activists and legal observers asked how the demonstrators were not in violation of the District’s anti-mask law.

The District Code states, "no person or persons over 16 years of age, while wearing any mask, hood, or device whereby any portion of the face is hidden, concealed, or covered as to conceal the identity of the wearer, shall… Hold any manner of meeting or demonstration."

But in a phone interview Tuesday, Metropolitan Police Spokesperson Alaina Gertz said masked marching only becomes illegal if there is a clear and imminent threat of harm or intimidation.

"The next part of the statute is key, where it says masked protesting is illegal only if there is 'the intent to deprive any person or class of persons of equal protection of the law or of equal privileges and immunities under the law,'" Gertz said. "The interpretation of what constitutes threats or intimidation is where we start to get into a grey area."

Police reported no arrests among the protesters or crowds of curious and disturbed onlookers who followed the neo-Nazis.

Credit: WUSA9
Members of the white supremacist group, Patriot Front, march with a police escort near the U.S. Capitol, Feb. 8, 2020.

Police and bystanders surrounded the parking lot entrance, until the masked individuals returned to their vehicles and drove away.

Officers on bikes and vehicles also accompanied the Patriot Front protesters along their route, creating a buffer zone between the neo-Nazis and counter-protesters.

According to Patriot Front’s website and the SPLC, Thomas Rousseau founded the hate group, when he was 17, just 18 days after Charlottesville, as he was dissatisfied that the clash’s results did not effectively spark wide-spread racial conflict.

The group openly calls for the formation of a white American state in language spread throughout its online manifesto.

"The state has long since ceased to advocate for the interests of the descendants of its creators, and thus a State which will be, above all else, a reflection of the national interest must be implemented fully and absolutely," the manifesto says.

Patriot Front also advocates the exclusion of all people of color from American life.

"An African, for example, may have lived, worked, and even been classed as a citizen in America for centuries, yet he is not American," the manifesto reads. "The same rule applies to others who are not of the founding stock of our people as well as to those who do not share the common unconscious that permeates throughout our greater civilization, and the European diaspora."

RELATED: One arrested during Richmond gun rights rally for wearing a mask

MPD confirmed the group did not request a First Amendment protest permit in advance of Saturday’s demonstration.

Police learned of the march that afternoon, through publicly-posted information on social media.

A permit for First Amendment gatherings is recommended, but not required, MPD confirmed. 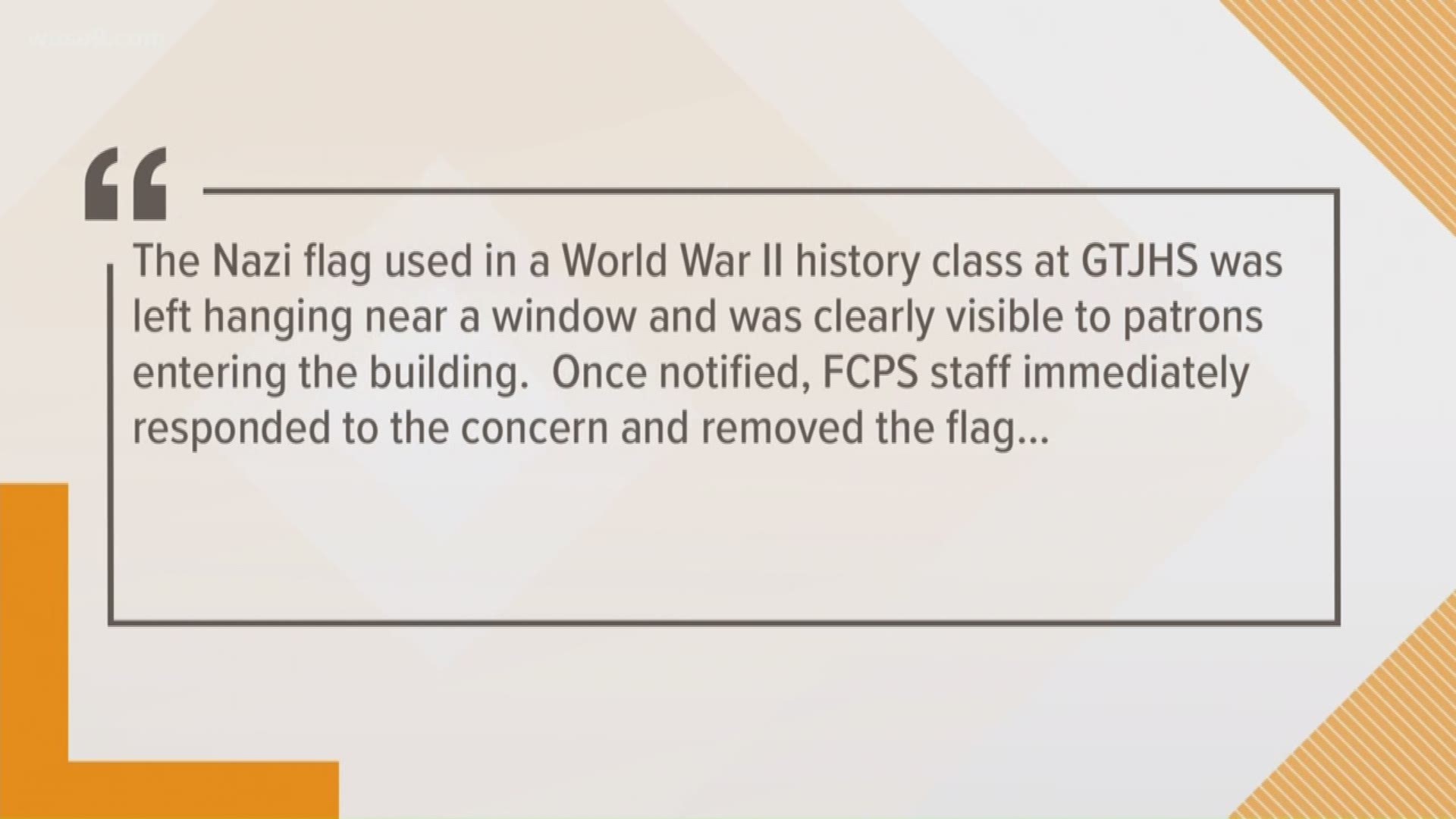