If you or someone you know is struggling during this time, you can always call 800-273-TALK for immediate assistance. 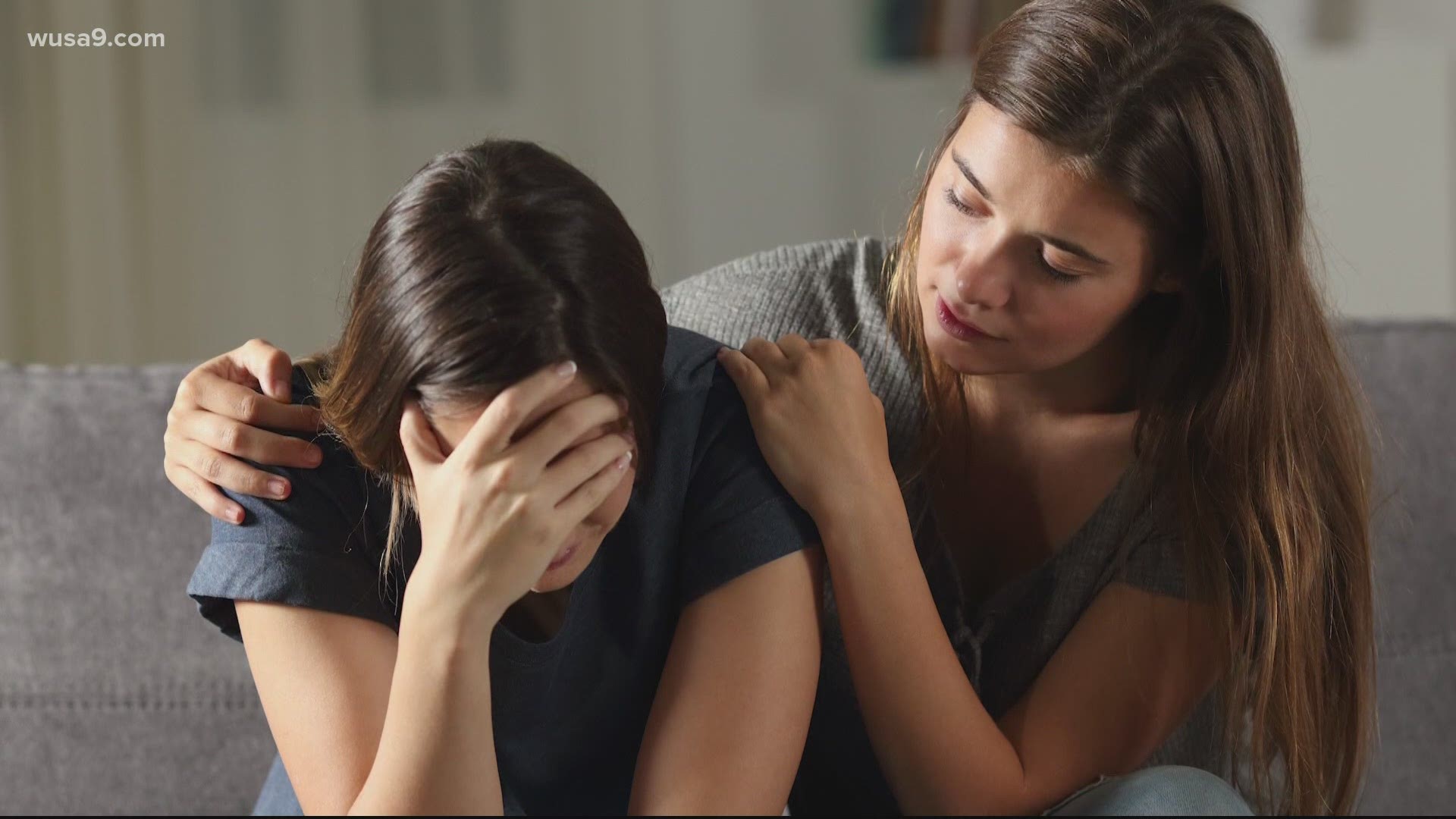 WASHINGTON — It’s a topic that many can find hard to discuss: If someone you know might have had thoughts of taking their own life.

The months characterized by the pandemic have seen an increase in those with suicidal thoughts, the CDC reported in June. A fourth of young adults and more than 20% of front line workers surveyed had considered suicide within the last month, according to the CDC.

WUSA9 reached out to the American Foundation for Suicide Prevention for guidance on having critical conversations with loved ones about suicide prevention.

Q: What signs are reasons to have this conversation in the first place?

Vice President of Mission Engagement Dr. Doreen Marshall said it comes down to changes in behavior, like sounding hopeless about life or feeling more sad or angry than usual. Also, a person isolating themselves more from people or activities they used to enjoy.

A: The person starts looking like they're wrapping things up. So they're giving things away. They may be saying things that feel out of character, like, I just always wanted you to know you were a good friend to me - things that sound like they're not planning to be around,” she explained. “If you're concerned, if you're thinking about someone and you're worried about them chances are you have something to be worried about.”

Q: If you’ve started to notice these signs… How can you start the conversation? What should you say?

A: “The only way we can tune into someone's suicide risk is by asking them directly and reassuring them that help is available for them,” Dr. Marshall said. “Many people who struggle with thoughts of suicide are struggling in silence.”

Today is #WorldMentalHealthDay. This year has been different from anything we've experienced before – no matter where you are. It's more important than ever to safeguard our mental health right now.

Together, we can create a culture that's smart about mental health. 💙 🌎 pic.twitter.com/E0yy0qZaxr

Q: Of course, asking someone that you care about if they’re thinking of suicide is a painful question. It might be hard to know what to do after you’ve asked.

What should your next steps be if the person says that they have had thoughts of suicide?

A: “What we know is it's good to avoid advice-giving, it's much more important to listen and say, you know, I don't know how this might work out, but I'm here with you, I'm here to help you. We're in it together.”

Q: What are some of the most common misconceptions when it comes to having this conversation?

A: “Sometimes in the uncomfortableness of the moment, sometimes people might try and brush it off or make a joke or even just say, ‘Oh, don't feel like that.’ And for the person who's struggling, they actually need to hear the opposite that it's okay that you feel that way,” Dr. Marshall explained. “I think the biggest myth that we deal with is that if you talk about suicide, somehow you're going to put a thought in a person's head that wasn't suicidal before or you're going to somehow make it worse. And we know there's no evidence of that. But the evidence is to the contrary, that opening up that door for dialogue really does help.”

Q: What about if you are a friend to someone that has lost a loved one to suicide recently - what is your advice on how to provide comfort for that person?

Dr. Marshall advised to try and provide support, just as you would with anyone who lost someone to a different cause.

"Make sure that you're not avoiding them, and that, just like if someone had lost their child or their partner to any other cause, this is an experience of grief. So all of the things you would normally do - sending a card, bringing a meal. Those things are important because it shows the person who's had a suicide loss that you are there for them in their grief," she said.

"Often suicide loss survivors feel the stigma of suicide that people don't know what to say. So they don't say anything," Dr. Marshall said this can be a common but unfortunate mistake. "Don't be afraid to talk about their loved one because as we know, their memories of their loved ones are more than just how the person died. It's an entire lifetime of memories."

She also recommends working to help find them a network, such as your local chapter of the American Foundation for Suicide Prevention, where they can meet others with a shared experience or professionals to provide additional support.

You're stronger than you think 💪

If you or someone you know is struggling during this time, you can always call 800-273-TALK for immediate assistance.

There is also a free crisis text-line to be connected with a trained professional at 741-741.