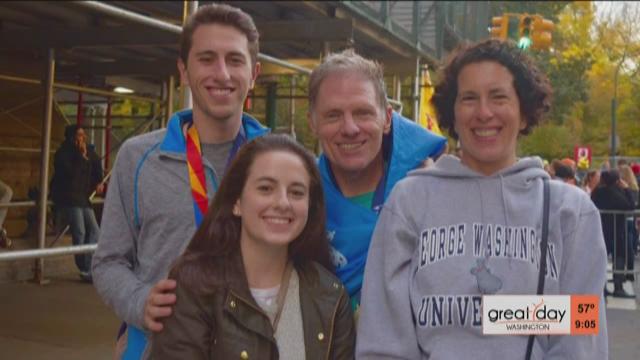 His daughter, Amanda Breslauer, always looked at her dad as a hero.

“My dad, he is the smartest person I’ve ever met in my life. He’s super dedicated, he loves to run, and loves to hang out with our family and our dog.”

When Amanda got the news that her childhood superman had fallen ill - in the same year that she was graduating from high school - she didn't know how to handle it.

“It was very scary because I really didn’t know how to help him, because I didn’t want to lose my dad, but I didn’t really understand what was happening and he’s super healthy, so I didn’t understand how this could happen,” recalls Amanda.

And no one really knows how this could have happened. There is no known cause or cure for the disease. But, what we do know is that the risk increases with age.

Mark says, “In the summer of 2014 I went for a physical. I had been getting physicals pretty regularly, but skipped a few years. What came back in the physical is that I had an elevated PSA rating. I got a call from the urologist, who was not necessarily the best when it comes to bedside manner. Basically, he let me know that I had prostate cancer… which I really didn’t know what to make of.”

And, at 60 years old Mark underwent the first major surgery of his life – a prostatectomy to remove the cancer. The decision saved his life, but his recovery wasn’t that easy.

“I tried to get back in the swing of things, being physically active, perhaps a little too soon…” remembers Mark.

But part of that downtime included Mark daydreaming about running a marathon… something he hadn’t done in 24 years.

Still trying to recover, Mark ran a half marathon the same year of his surgery.

Amanda says, “He wasn’t planning on running the marathon in 2015, but kind of to prove to himself and everyone else that he was just as healthy as before, he wanted to run the marathon and my brother ran it with him.”

“I resumed running, which I had been doing pretty frequently before then, before surgery and competed in a half marathon in San Francisco and also entered to run the New York Marathon in support of a prostate cancer charity,” says Mark.

This year, Mark ran the New York City marathon yet again… this time braving the course alone, but not finishing due to an injury.

“My prognosis continues to be pretty favorable. I’ve had periodic PSA tests since my surgery and so far, PSA remains undetectable, which is what we want to hear,” says Mark.

And although his future looks bright, Mark doesn’t sugar coat the lingering affects of having battled the illness.

“Occasional minor incontinence and when it comes to sexual dysfunction, it’s not quite what it was before the surgery, but it’s definitely improving.

This has changed my life in that it’s made me much more aware of the ends of life. There’s nothing like cancer to focus your mind. I try to keep aware of the more important things in life and not get wrapped up in the minor distractions and minor annoyances.”

Mark Breslauer’s story is a part of a men’s health awareness series on Great Day Washington, partnered with The Movember Foundation.

Special thanks to Men’s Wearhouse in Lanham, Md., MGM National Harbor, the Washington Wizards, the Washington Capitals and The Cat’s PJs for donating item’ for our "Mo Bro" care package.