The Way: How a Salado couple's tragic story inspired a chart-topping song 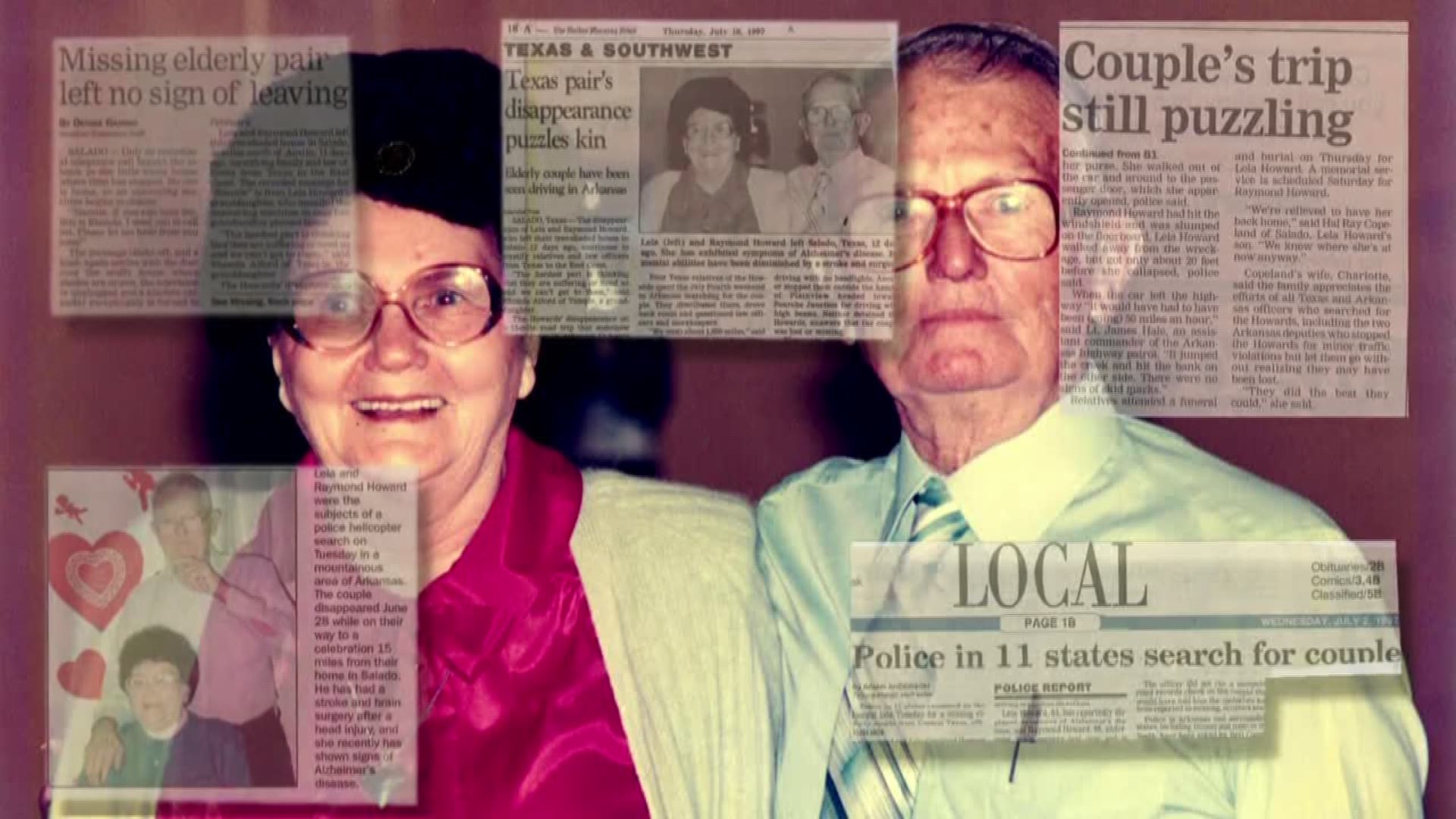 An exit to eternal summer slacking, but where were they going without ever knowing the way?

It's a summer tradition, one that takes greater meaning in cities like Salado and Belton.

For Lela and Raymond Howard, that tradition was Pioneer Day in Temple.

"I knew they were going to be going because they went every year," said Hal Ray Copeland, Lela Howard's son.

The Howard's were both on their second marriage, united through a love of the church, and that late-in-life lust to live.

"I think they just enjoyed going and doing things together. Nanny always used to – that's the main word she stood by is 'go'," said Rhonda Alford Coleman, Lela Howard's granddaughter.

On the mind of their loved ones - concerns over their memories.

Raymond, 88, had recently had brain surgery, and Lela, 83, was showing symptoms of memory loss.

"You know on Saturdays, when I said when I would come out here, I started noticing a few things. She'd leave something on the stove, and we'd be fixing her hair – and I'd say I got to go check on whatever she had. She'd go 'I don't know what you're talking about," said Coleman.

Their concerns rose to a point where they tried to prevent them from driving.

"We kind of hid the keys for a little while," Coleman said.

By June 1997, Lela Howard was doing the majority of the driving for the couple.

"She called me and crying and said she couldn't find her keys, and I couldn't stand (her crying)," Copeland explained, adding he eventually relented and gave her the keys back. "I could feel how she hurt."

Even with the memory loss issues, the family said Lela drove often, and did so well.

But when it came time for the Pioneer Day Festival, the family offered to assist.

The trip from their Belton home to Temple was 10 miles - fifteen minutes tops.

"We called the officers, and they came right on out. (We) had no clue whatsoever, we had no idea," said Copeland.

The family drove to the local Wal-Mart, where the Howards would stop in daily for a coffee and donut, but found no sign of them there.

Their disappearance gained widespread media attention, including in the Austin-American Statesman. At the time, the manager for Austin-based band Fastball encouraged their lead singer Tony Scalzo to look to the newspaper for inspiration.

"Our first album was called 'Make Your Mama Proud.' As hard as we worked to make it and promote it, we were still basically running a college-market. We didn't really have an established sound. Where that record sound indicated where we were going, wasn't really where we wanted to go," said Scalzo.

Along with Scalzo, the band features guitarist and singer Miles Zuniga, and drummer Joey Shuffield.

Trying to come up with new material for their second album, Scalzo took their manager's advice and turned to the newspaper.

"I looked in, right away this story sort of struck me. It was sort of an ongoing story. Still no developments in the case of the missing couple," Scalzo said.

As he read more and more, the wheels started moving in his mind.

"I just started getting these ideas, well maybe they don't want to be found, maybe they're just like - they're sick of being responsible and they just want to go out and have fun," Scalzo explained.

Within a few hours, Scalzo had developed the bulk of the song, all as authorities were still searching high and low for the Howards.

They just drove off and left it all behind them. Where were they going, without ever knowing the way?

"The police got a lot of calls about seeing them, seeing them different places. Finding an older couple in a certain type of car, and we kind of got our hopes up that first week," said Coleman.

"They got pulled over one time by a cop – he questioned them, but he let them go," Lela Howard's grandson, Randy Alford, explained.

An officer in Arkansas – hundreds of miles from Salado – had stopped the Howards for driving without their lights on.

The cop flicked the headlights on for the couple – then let them go.

"We can't figure out how they got through Dallas. Haven't figured it out yet," said Coleman, her mind still flummoxed by the trip.

Lela Howard had family in Arkansas and was familiar with the area.

"In her right mind, [Lela] would have called and found Nadine (her relative)," Coleman said.

"They were about a mile from my cousin's house when [the officer] stopped them," Copeland said.

At the time – the officer didn't know they were missing.

The stop did, however, narrow the search area.

Still, with no answers, the saga continued.

"[We] didn't know anything," Copeland said. During that time, he made three separate trips from Salado to Arkansas, searching the area they were last seen - hopeful to find them.

Each time, he left empty-handed. Finally, on Day 13, a break in the search.

"Two boys, walking home from a video store. Their father left them at the video store and they were going to walk home. As they walked home, they walked by this little creek area. And it had a strong smell, a strong odor, so when they got home, they told their parents, and that's when all of it started," said Coleman.

When cops checked the area, they found the maroon Oldsmobile the Howards were driving - at the bottom of a 25-foot cliff near Hot Springs, Arkansas.

"It was a relief. Because a lot of families don't have that closure. And that must be very hard," said Alford.

You can see their shadows wandering off somewhere, They won't make it home but they really don't care, they wanted the highway, they're happier there today, today

On a conference call - Fastball and its managers were discussing what song would be the single on their new album.

"Our manager just blurts out - what about that song 'The Way?' Why don't you just go ahead and try that?" Scalzo explained.

The area where the Howards&#39; vehicle was found.

After the decision was made, the song was sent to radio stations across the country.

The Howards' family didn't initially know that 'The Way' was about Lela and Raymond, but the similarities to their story were apparent.

"That sounded like Momma and Mr. Howard - the way they died. You could tell by the way it sounded," Copeland recalled.

"I thought 'that's exactly what happened. That's what they did. They just drove away,'" said Coleman.

A few days later - Copeland's beliefs were confirmed. What had quickly become the #1 song in the country was a living tribute to his mother.

"I was just blown away, I just couldn't believe somebody would do something like that for my grandma," added Alford. "Powerful, very powerful."

"My cousin said (Lela) left a star. On TV all the time, a song about her. She would have loved that," Copeland said.

The album ended up going Platinum and made the band worldwide sensations. For seven weeks, it topped the charts, taking the band across the award show circuit.

And 19 years later - the song is still on the airwaves; its meaning far surpassing its platinum status.

"No one else has a story like that. There are other stories, but it's not this story," said Scalzo.

As for Fastball, they're currently on a cross-country tour, promoting their first new album, Shine Into Light, in eight years.

"Every single night (of this tour), 46 shows out on the road, with a big audience, every single [crowd] sang the whole song. They know all the words. They sang it. Amazing. They sing it loud," Scalzo said.

They're also working on a 20th-anniversary release of "All the Pain Money Can Buy," the album which featured "The Way."

The lyrics still hit home for a family still missing their loved ones.

"Amazing. And [Lela] deserved it. She was very special," said Coleman.

"I think the song is the closure part of it. It's the final deal to the whole story," said Alford.

While Lela was never diagnosed with Alzheimer's during her life, her family said she displayed some symptoms.

"I think at that point it opened up a whole new awareness for those with Alzheimer's (and memory loss/dementia), opened up the doors to a big problem we have in this country," Alford said.

"Early in the morning, (Lela's) mind would be pretty good. But as the day wore on, that's when it got worse," said Copeland.

As we concluded our interview with Lela Howard's family, Coleman read aloud the lyrics to the song. As she battled emotions, the words took on a far more personal meaning.

"They left before the sun came up that day. They just drove off and left it all behind them. Where were they going without ever knowing the way?"