Winter Weather Forecast: It's been almost 6 years since our last blizzard, could we see one this winter?

WUSA9 has accurately predicted the first snowfall in the DMV for three of the last four years. 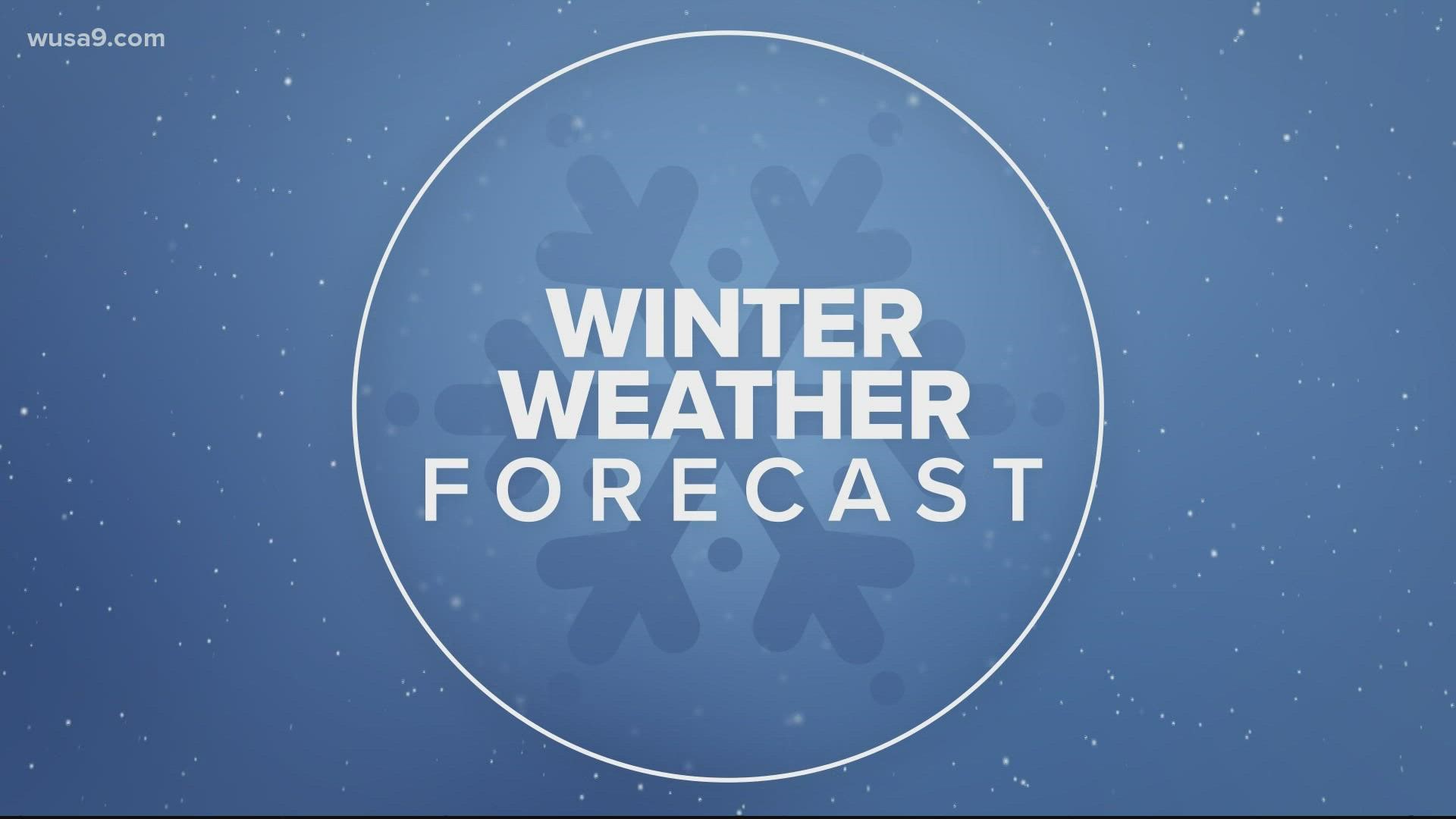 WASHINGTON — Winter is fast approaching and snow lovers are wondering when they are going to see their favorite white fluff gently fall to the ground. It looks like snow lovers may get at least one good snowfall this year.

We've done a deep dive into the data to bring you our winter weather predictions.

We have a 70% chance of a weak La Niña returning for our upcoming winter. That means that the sea surface water temps of the equatorial Pacific Ocean are colder than average.

It is just the opposite during an El Niño when the water temps are warmer than average and the price of anchovies goes up. Why? Well, because as the warm water upwells to the surface leaving the anchovies with less to eat.

We had a moderate La Niña last year and that was painful for snow lovers like myself.

During La Niña winters, the jet stream usually takes the storms west and north of the DMV. With this track, we remain on the warm side of the storms resulting in mainly rain or snow to rain events.

RELATED: How strong is this La Nina and how long will it last?

We only had 5.4 inches of snow last winter and with a strong La Niña the year before we only recorded .6 of an inch.

PHOTOS: What happens during a La Nina Winter?

1 / 3
WUSA9
During La Nina winters, the jet stream usually takes the storms west and north of the DMV. With this track we remain on the warm side of the storms resulting in mainly rain or snow to rain events.

In 2013/2014 Reagan National Airport recorded 32 inches of snow; and, that winter we got snow every month from November through April.

Snow lovers, we do not usually fare well when we have La Niña winters; but, I think we will see something similar to the 2015/2016 winter when we had one big storm.

I am not necessarily predicting a blizzard this winter, but I think we will have at least one substantial snow in the order of 6+ inches in D.C. and 6 inches – 12 inches in our northern and western suburbs.

Just like the winter of 2015/2016, I think it will be a snow famine except for that one storm. I also think we will have one ice storm this season as we oscillate between arctic outbreaks and warm-ups.

The farther north and west you live, the more cold air you will have available; therefore, a bit more snow than the immediate Metro area.

Temps will be above average this winter but remember that is over a three-month stretch. We may have a month below average, a month above average, and a month around average equaling a slightly above temperature average.

Even when winter temperatures average above average there will still be plenty of cold days.

We know what you are really wondering though when will our first snowfall of an inch or more will be? Drum roll, please...

It’s been almost six years since our last blizzard.

There is snowfall and then there are blizzards. The most recent big one, most people remember, was in 2016. The Blizzard of 2016 accounted for all but 4 inches of our entire snowfall that season. That blizzard came in the heels of our warmest December (2015).

17.8 inches fell at Reagan National in February 2016, which ties the February blizzard in 2010. 29.3 inches was recorded at Dulles Airport during the blizzard of 2016, coming in at number two all-time.

The Mid-Atlantic region can see some serious snowfall. We set a new snowfall record in downtown D.C. with 56.1 inches in the winter of 2009/2010. That same winter also set a record at Dulles Airport with 73.2 inches.

Since 1953 we have had eleven winters with a weak La Niña, like the one we are predicting for this winter. With an average of just under 10 inches of snow, and with the extreme at 17 inches. Weak La Niña winters are, more often than not, low in the snowfall department.

The average snowfall for moderate La Niña winters is skewed from our 1995/1996 winter.

Downtown D.C. averages nearly 14 inches of snow each winter but nearly 17 inches if we use all of the data back to 1872. Dulles averages around 21 inches of snow.

On average we have a wide range of snowfall amounts in the DMV from 5 inches in Southern Maryland to nearly 40 inches around the Cumberland area.

Let’s break down the snowfall by month.

The numbers are higher at Dulles. In November, Dulles averages .3 of an inch, almost 3 inches in December, around 7 inches in January and February, almost 4 inches in March and .1 of an inch in April.

Let’s break that down by some cities.

Weak La Niñas, more often than not, result in a milder winter than average. 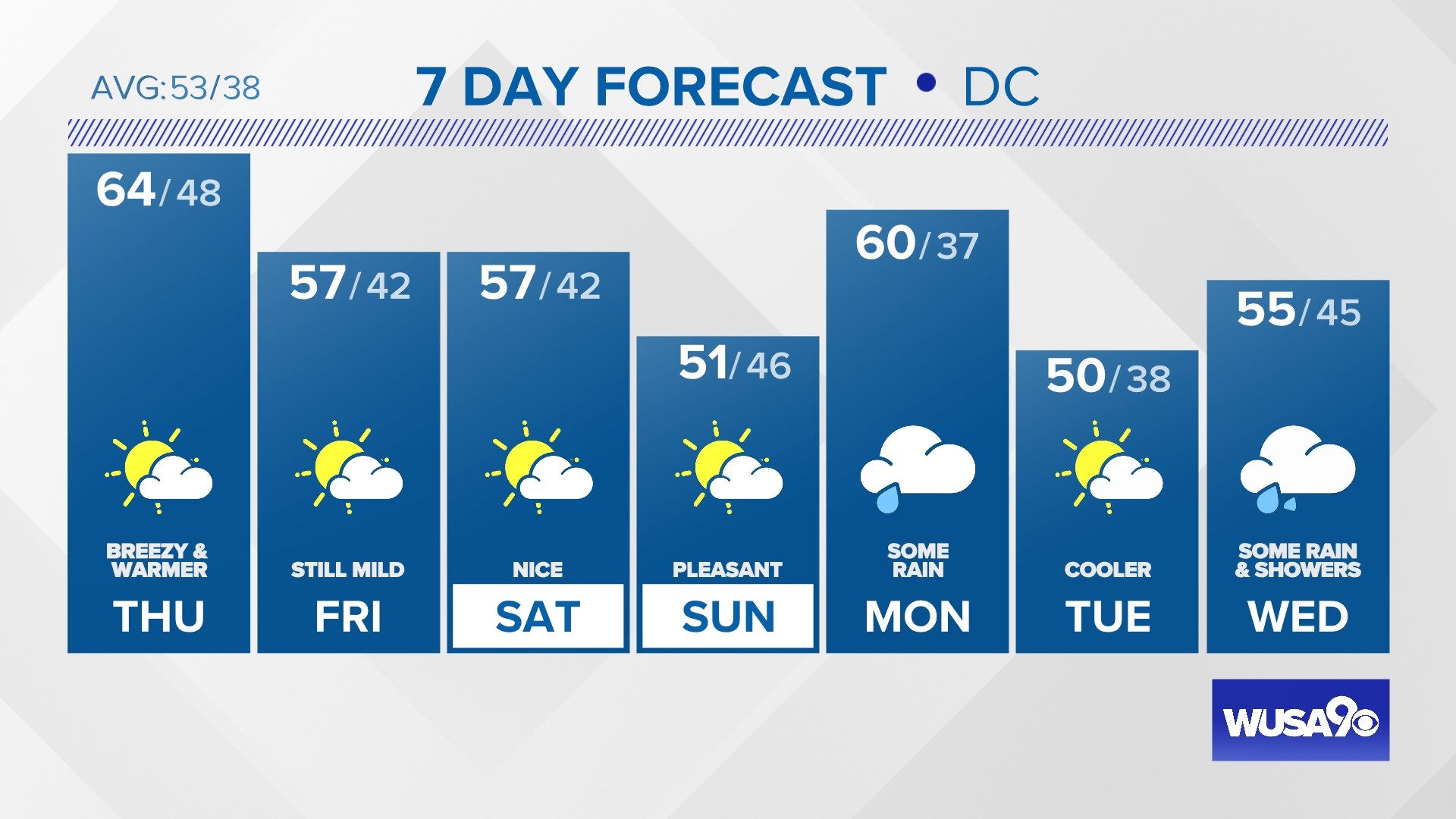