Why this year's DC snowfall could be feast or famine

On average we wind up with 15 inches of snow in DC during La Nada winters, which is what we'll see this year

WASHINGTON — Winter will be here before you know it, and the WUSA 9 Weather Team has been working hard to put together our 2019 - 2020 winter forecast for the D.C. area.

You might be familiar with El Niño and La Niña winters, but this year we're going to face a La Nada winter. During a La Nada winter, snowfall amounts are either feast or famine (a lot or a little).

The El Niño Southern Oscillation, or ENSO for short.

ENSO is a climate cycle driven by ocean surface temperatures in the eastern Pacific Ocean near the equator, off the coast of South America. This cycle is broken up into three phases: El Niño, La Niña, and the neutral phase commonly referred to as La Nada.

During an El Niño, a warm pool of water develops in this location, which drives a change in the weather patterns in the United States.

The opposite phase of EÑSO is called La Niña, in which cooler-than-average temperatures are located in the equatorial Pacific.

When we don't have an El Niño or a La Niña, we're in the neutral phase of the El Niño Southern Oscillation. Although this neutral phase doesn't have an official name, it's commonly referred to as La Nada, which translates to "the nothing" in English from Spanish. During La Nada, ocean temperatures in the equatorial Pacific region are near average or normal.

How Ocean Temperatures Are Connected To The Weather

Believe it or not, the ocean temperatures in this part of the globe have an impact on larger-scale weather features over longer time scales. In short, during winter, ENSO impacts the layout of the jet stream and can drive which areas of the U.S. end up wetter or drier than normal.

We were in an El Niño at the start of the year, but that ended mid-way through the hurricane season. Now, we are in the neutral phase of ENSO, La Nada.

During La Nada winters, it's not as clear of a picture as during El Niño and La Niña seasons for snowfall and temperature forecasts.

In general, we see a more active polar jet stream driving our weather and less influence from the subtropical jet.

With this more active polar jet stream that keeps an active storm track from the Great Lakes down to the Northeast and Mid-Atlantic. This storm track can mean more Clipper systems for us, which are quick-moving but moisture starved. They can put down some light accumulations of rain or snow, but don't expect a foot of snow. 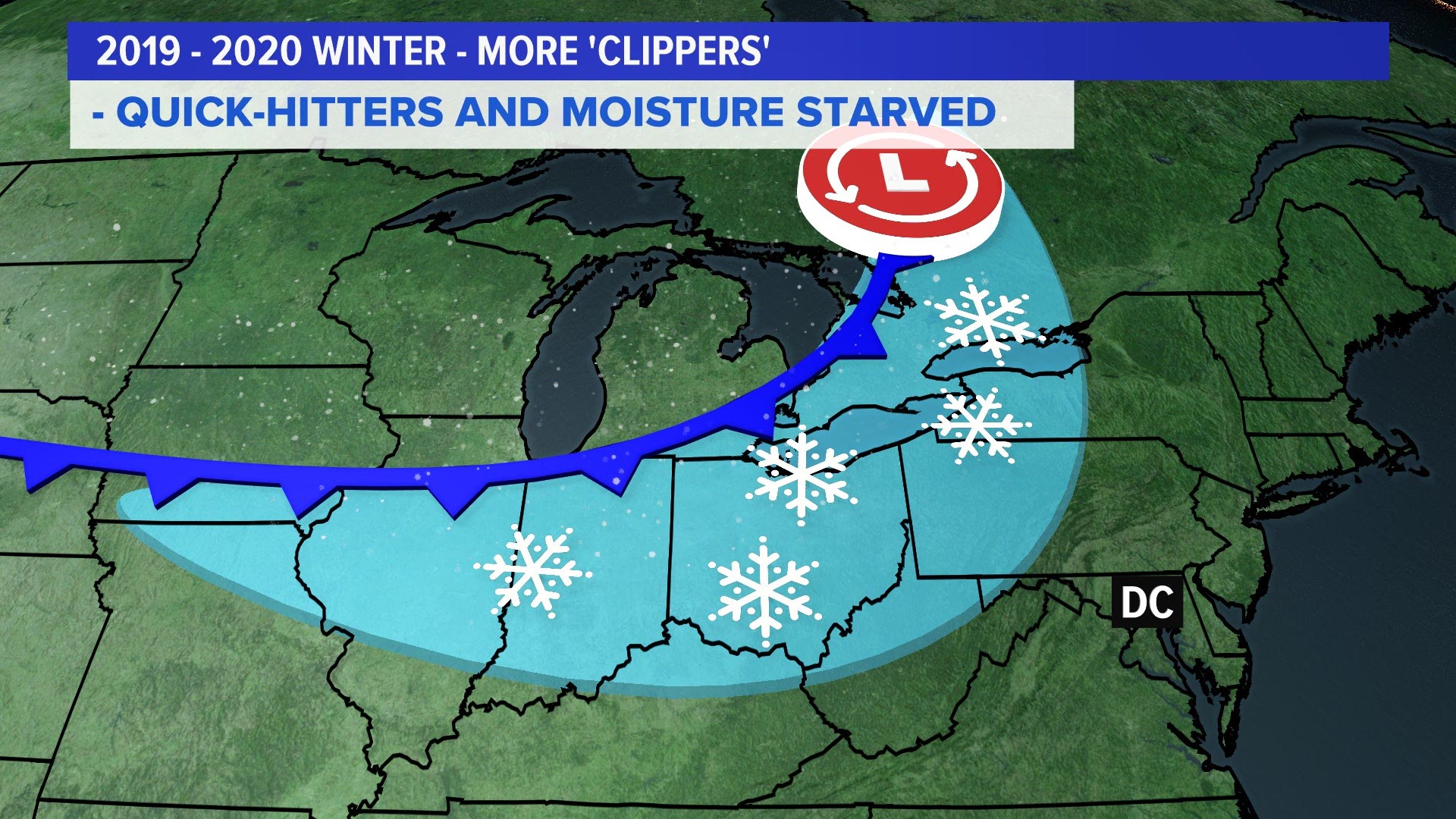 With a La Nada winter, the subtropical jet is often pushed a little further south. This can mean less coastal storms for us in the D.C. area. It can also mean that we see fewer coastal storms impacting us, as they're often too far south.

But there is high variability and changes within La Nada winters. Forecasters often pay closer attention to medium-range changes in our atmosphere that may fluctuate every few weeks rather than lasting through an entire season like EÑSO.

During La Nada years, it can end up being feast or famine.

But in D.C., we average around 15 inches of snow during La Nada winters.