Donnie Shirer, a 3rd generation farmer, says the drought is damaging crops and costing profits across the state. 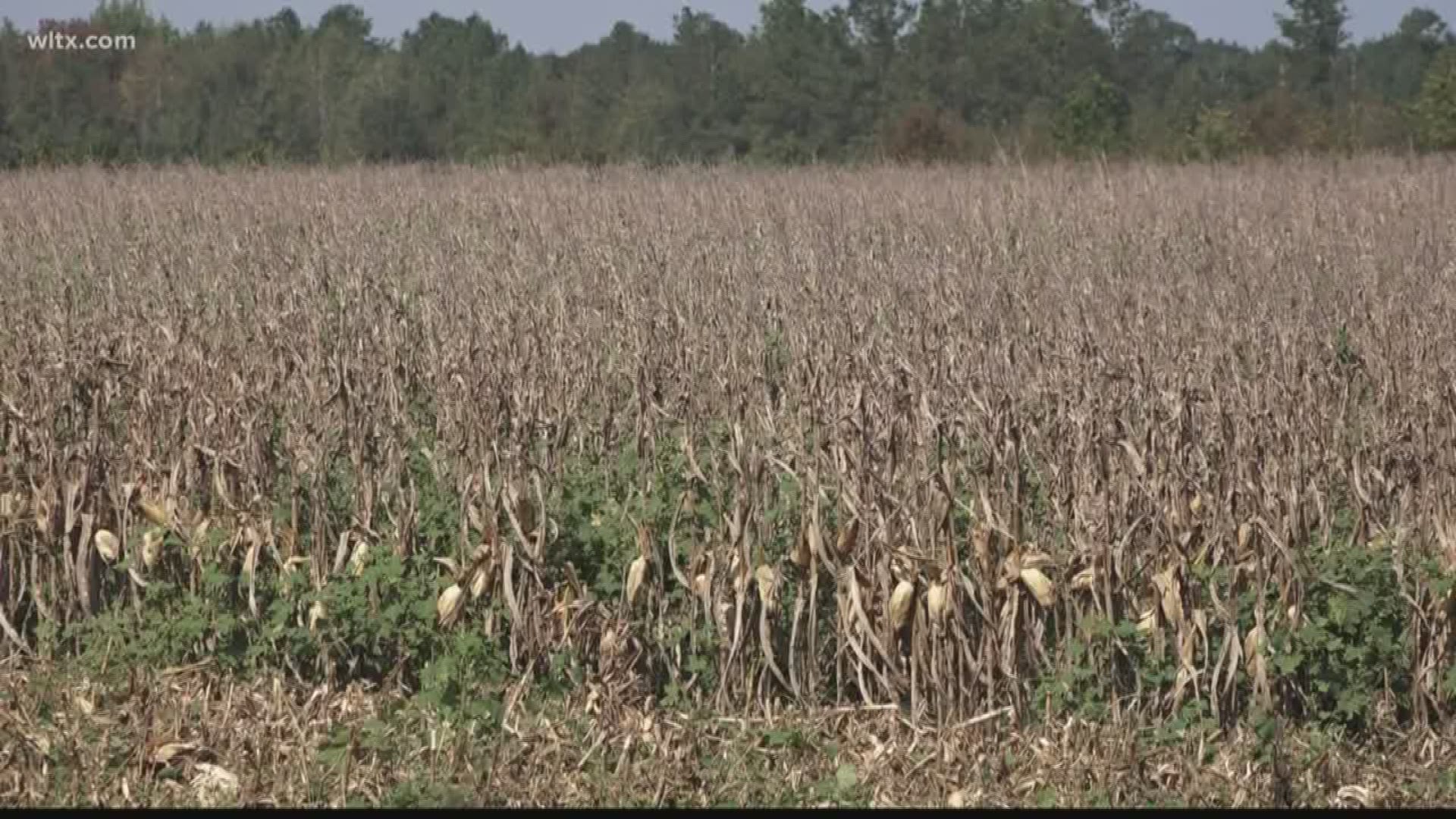 COLUMBIA, S.C. — South Carolina farmers are dealing with drought conditions across parts of the state that are damaging crops and hurting profits.

“No, this isn't normal at all. If you can get a little closer, you can see these pods, there's just-- there's nothing in them. There's just nothing in them,” said Donnie Shirer while showing a struggling soybean plant.

Shirer, a 3rd generation family farmer in Sumter County, said it’s been a tough summer as high heat and little rain have made it difficult to produce high yields for crops like corn and soybeans.

The farm, which has been in Shirer’s family since 1910, is not alone in its struggles. Shirer said the entire state is having difficulties.

“We're in pretty shabby conditions, we're hurting. I mean we really are. We got a little money for soybeans for last year from the marketing facilitation act, but that's like a drop in the bucket. We can't recover from that and we don't want a handout. We want to make a living. We're out here working seven days a week sometimes and that's what we want. We want to make a living, we don't want a handout,” Shirer continued.

The Shirer farm grows corn, wheat, and soybeans. This year, they’ll lose about 60 to 65 percent of their usual soybean yield due to heat damage and damage from a lack of water, according to Shirer.

The 30 to 35 percent yield on soybeans will cost Shirer hundreds per acre.

“We've been hurt somewhat by the tariffs so the price of soybeans is deflated now anyway. But, as far as into money on soybeans, we're probably talking a 400 dollar an acre or more hit on soybeans,” Shirer specified.

He’ll also lose money on corn yields. Depending on irrigated corn versus dry field corn, Shirer will lose anything from $100 to $120 an acre. But Shirer said he knows fellow corn farmers losing up to $500 an acre.

This year’s drought is another recent punch from Mother Nature for South Carolina’s farmers.

RELATED: More than $100 million in damages to S.C. crops after Florence

The state’s Department of Agriculture said it was aware of crop damage and loss across the state. In a statement, they acknowledged the drought and asked farmers to report conditions on their farms.

“Farmers across the state are experiencing abnormally dry conditions which have led to crop loss and damage. Here at the South Carolina Department of Agriculture we are encouraging farmers to report their conditions on the mobile friendly drought impact reporter, that can be found on our website at agriculture.sc.gov. Frequent reporting is encouraged to show how conditions are changing. As for current conditions, there have been some spotty showers, but not a sufficient amount of rain in any area to change the current drought conditions. Temperatures have been above average for the month of September which have not helped the drought conditions across the state.” – Katherine Helms, SCDA

You can report drought conditions at your farm here.

Shirer said his farm has seen about 12 inches less than the average amount of rain so far this year.

When asked about the potential role of climate change in recent weather events dating back to the 2015 floods, Shirer said it’s not a big focus of discussion, but it’s on some minds.

“We hope the powers at be, the government, the leadership, will address this and hopefully avoid it. It’s not really our generation that’s going to be affected so badly by it, but the next one and the one after that. Our great grandchildren, I hope they don’t look back at us and say we went from the greatest generation to the sorriest generation,” Shirer said.