Here are 3 of the top tropical systems to impact the DMV, causing the most damage and most extreme winds. 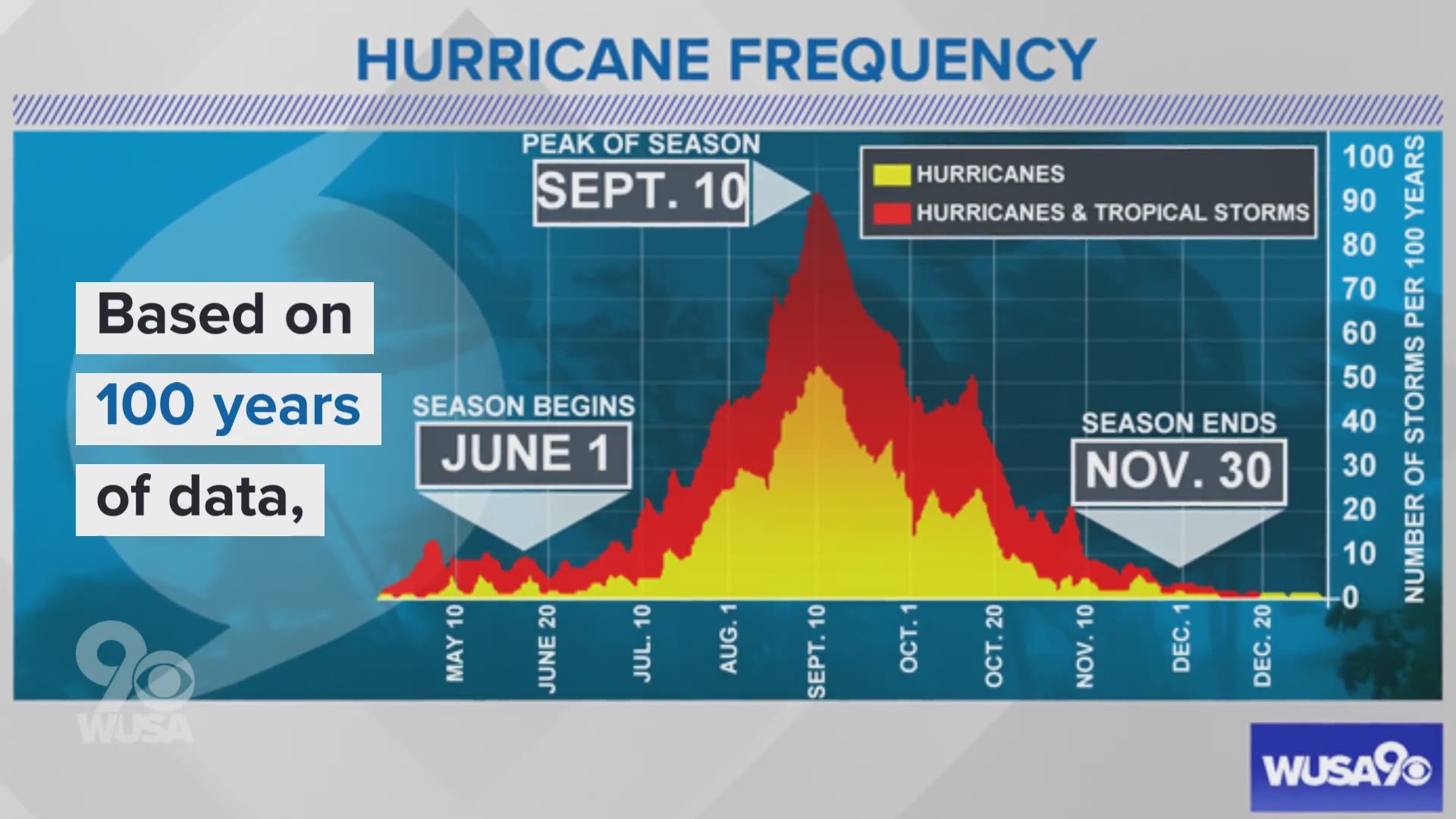 WASHINGTON — Sept. 10 is the peak of hurricane season in the Atlantic Ocean Basin. What does that mean? It means looking at the climatology or history of past hurricane seasons -- the frequency of named storms is at its high point Sept. 10.

The chart below shows the frequency of both hurricanes and all tropical named systems based on a 100-year average. September tenth is our season peak -- but on average, the following 4 - 6 weeks afterwards can also be quite active. On any given year, there's about a 50 percent chance that there will be a hurricane on the Atlantic basin on Sept. 10. Only four percent of hurricanes develop in the month of June on average, with six percent as the July average. The average jumps to 29 percent in August, 36 percent in September and a respectable 19 percent in October.

Hazel made landfall as a Category 4 hurricane with maximum sustained winds of 135 mph on Oct. 15, 1954 along the North Carolina and South Carolina border. It was a quick moving storm and raced inland northward. Because the storm moved so quickly, damaging winds stretched inland for hundreds of miles. Significant storm surge as high as 18 feet occurred along the coast near landfall. There was also storm surge in the Chesapeake Bay.

Credit: AP
FILE-In this Oct. 15, 1954 file photo, Hurricane Hazel destruction is seen in Morehead City, N.C. The last time the midsection of the East Coast stared down a hurricane like Florence, Dwight Eisenhower was in the White House and Marilyn Monroe and Joe DiMaggio were newlyweds. Florence could inflict the hardest hurricane punch the Carolinas have seen in more than 60 years, with rain and wind of more than 130 mph (209 kph). (AP Photo/Clifton Guthrie, File)

Wind records from Hazel 65 years ago still stand. In the district, the peak wind gust at National Airport was 98 mph. This is still the district's all time record highest wind gust.  As you can imagine, damage was widespread. Trees littered the ground all over the DMV. Below are two photos of tree damage from both the White House and the U.S. Capitol Building.

Credit: ASSOCIATED PRESS
Workmen are busy in Washington, disposing of trees felled on the U.S. Capitol grounds last night by Hurricane Hazel, Oct. 16, 1954. Damage was reported to 27 trees in the area. (AP Photo)

Credit: ASSOCIATED PRESS
A police officer stands guard beside uprooted tree blown down in the White House drive by the hurricane in Washington,Oct. 15, 1954. It was promptly sawed up and carted away in preparation for the president's expected return after midnight tonight. (AP Photo/Henry Griffin)

In the D.C. metro region, Agnes brought a total of nearly 8.2 inches of rain to National Airport (with 6.11 inches falling on June 21) while Dulles Airport in nearby Sterling, Virginia, saw a storm total of 13.65 inches (including a daily record of 10.67 inches of rain on June 21).  This copious rainfall flooded an untold number of roads and washed away some area bridges.

The Potomac River at Little Falls crested more than 12 feet above flood stage, according to the U.S. Geological Survey. 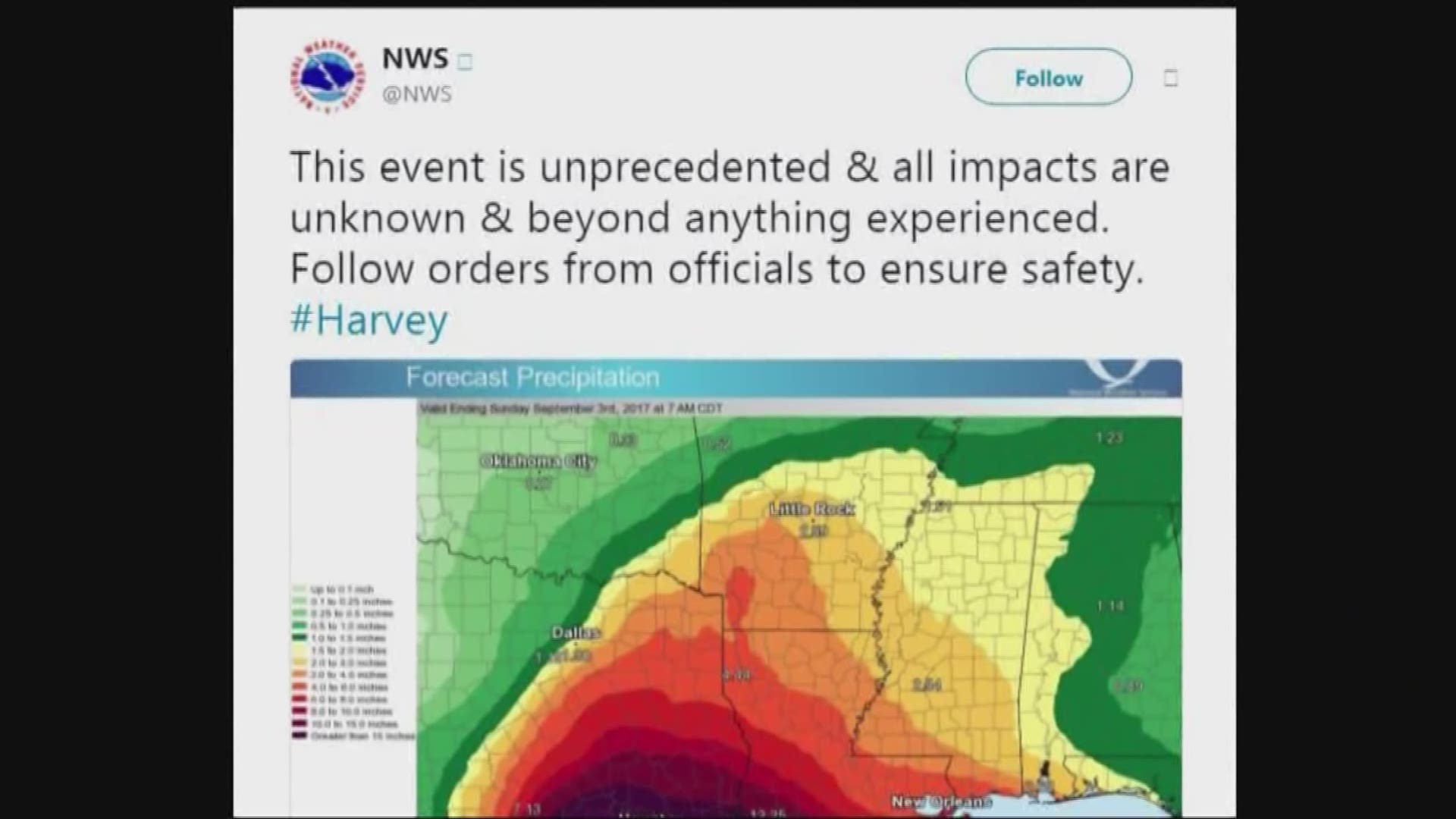 As bad as the flooding was in the nation’s capital, it was even worse in Pennsylvania where it caused a dike to breach in Wilkes-Barre that almost destroyed the entire town.

Credit: AP
President Richard Nixon studies the flood damage in the aftermath of Hurricane Agnes, near Harrisburg, Penn. from his helicopter window, June 24, 1972. The president toured the Maryland-Pennsylvania area from his retreat at Camp David, Maryland. (AP Photo/Charles Tasnadi)

Hurricane Isabel made landfall in North Carolina as a Category 2 hurricane on Sept. 18.  It tracked west of the district as it weakened and brought the D.C. metro area a significant amount of heavy rain and gusty winds. Over one million power outages were observed around the nation’s capital, with significant coastal flooding in Old Town, Alexandria in Virginia and in Annapolis, Maryland.

Credit: AP
The overflowing Tidal Basin covers a walkway across from the Jefferson Memorial in Washington Friday, Sept. 19, 2003 in the aftermath of Hurricane Isabel. Washington suffered from a rare power vacuum Friday. Thousands of residents were without lights, hundreds of trees littered the landscape and all three branches of government were basically shut down. (AP Photo/Evan Vucci)

Isabel left about $5.7 billion in U.S. damages in 2003. One million customers were without power in the DMV that on average took 3 to 4 days to restore.

Credit: ASSOCIATED PRESS
Ed Larrimore, left, and Bob Fisher, both with the Maryland State Highway Administration, inspect damage done by a large sink hole Tuesday, Sept. 23, 2003 which opened up in Frederick, Md near I-70 and South Street. Overnight rains are to blame for the sink hole, which measured 80 feet wide and 130 feet long. (AP Photo/Timothy Jacobsen)