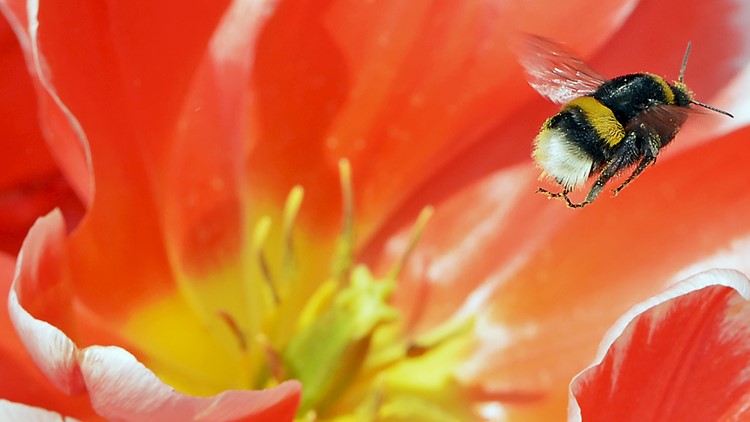 Some bees may want to say "buzz off" when it comes to climate change. A study in the journal Science, found that bumble bees numbers are declining and the bees are at risk of becoming extinct in some locations because of extreme heat.

Researchers at the University of Ottawa found that the likelihood of a bumble bee population surviving in a given habitat has declined by roughly 30 percent.

In a statement, an author of the study Peter Soroye, warned of consequences.

"We've known for a while that climate change is related to the growing extinction risk that animals are facing around the world," Soroye said.

He said bumble bees are disappearing at an alarming rate.

"If declines continue at this pace, many of these species could vanish forever within a few decades," Soroye said.

Bumble bees are critical to pollinating crops such as tomato, squash and berries, blueberries, almonds, cucumbers, and chives. They are different from honey bees, in that they are able to forage in cold, cloudy, and rainy conditions.

The bumble bee's furry coat acts like a sweater and that makes it harder for them to survive in extreme heat. When the bees are flying or flapping their wings to loosen pollen, their body heat continues to rise.

In the study, scientist used data on 66 different bumble bee species from North American and Europe. The data spanned over a 115-year period from 1900 to 2015. They were able to see how the populations changed comparing where bees are now to where they used to be.   Researchers said they found bumbe bee populations were disappearing in areas where the temperatures became hotter.

Researchers at the University of Ottawa have developed a tool to predict extinction risk based on the type of bumble bee.

The International Union of Conservation of Nature has listed some bumble bees found in the U.S. as critically endangered. The species that are unable to handle changes with climate seem to be the most vulnerable according to a report by the U.S. Department of Agriculture entitled "Bumble Bees of the Eastern United States."

The report also noted that other threats to bumble bees include pollution and pesticide use.

RELATED: Cold and dry, just the way the flu likes it. Here's how weather impacts the flu

In other climate news, Antarctica hit a record high of 65 degrees (64.9) at Argentina's Esperanza research station.   Argentina's national meteorological service posted about the temperature on Twitter. This broke the old record of 63.5 degrees in 2015. Scientist from the World Meteorological Organization will verify the record. Antarctica is one of the fastest warming places on earth.

A windstorm may have assisted in producing the warm conditions there. The Antarctic Peninsula experiences what is called foehn winds, which produce warm air as winds blow down the side of mountain ranges.

RELATED: What the DMV likely thinks about global warming and climate change

Some Airports May Be Underwater by 2100

An environmental group is warning that some airports could be underwater by the year 2100 due to sea level rise.

World Resources Institute did an analysis and found that 80 airports may go underwater, including some in the United States.

Experts said that if carbon emissions stay the same, this scenario would be on track to cause sea level rose one meter. If emissions were reduced by a certain level WRI experts believe that sea level rise would be a half a meter, and that only 44 airports would be at risk.

So what makes these airports so vulnerable? Many of them are located near large bodies of water and flat land, WRI officials said.

The flat areas are ideal for long runways for take and landing. Also gaining altitude is easy to do over large bodies of water as opposed to tall buildings.

Some airports with the most risk include Key West International Airport in Florida and Amsterdam's Airport Schiphol.