In DC, don't get too excited. 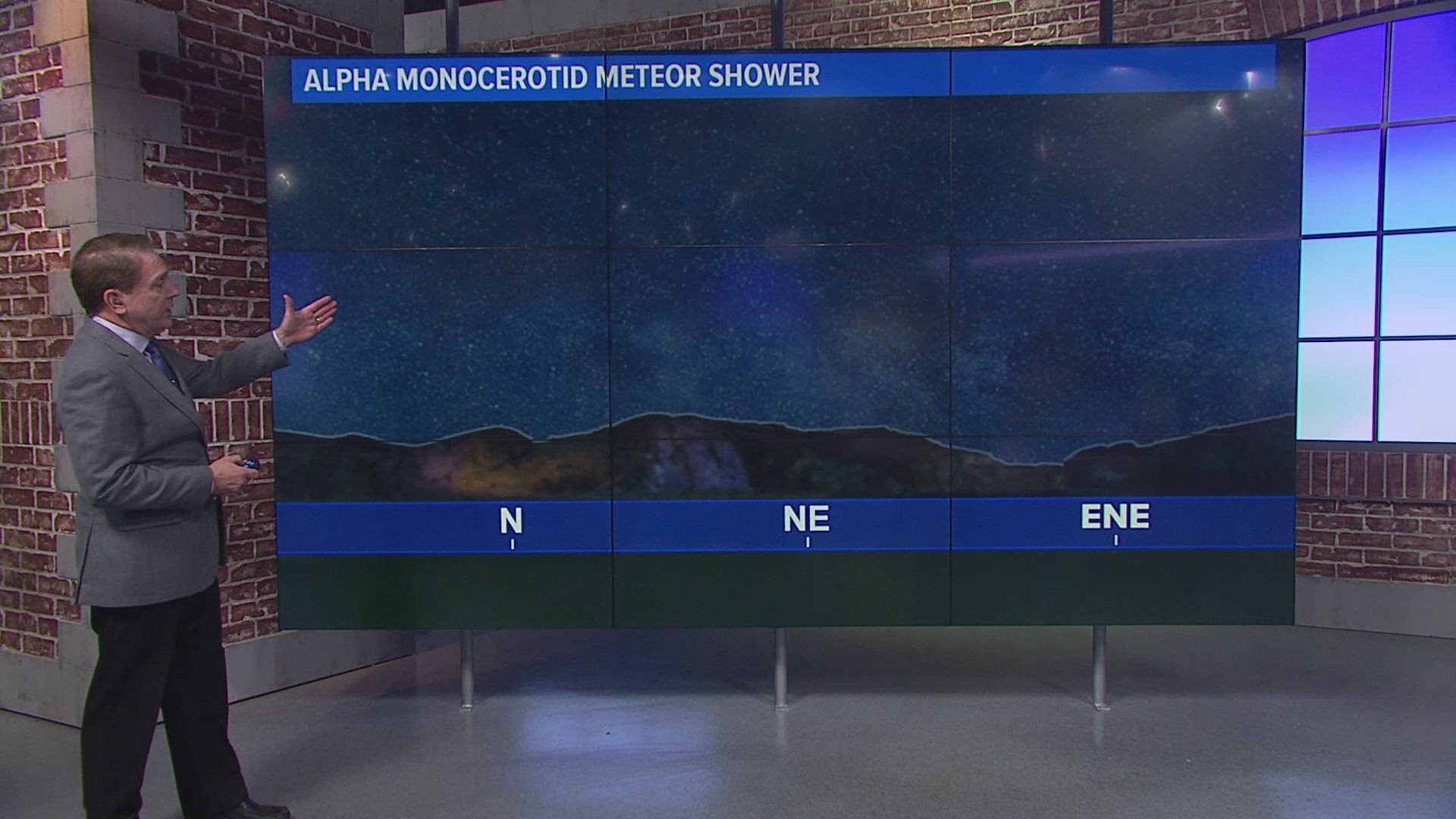 WASHINGTON — The Alpha Monocerotid meteor shower peaks every year between November 15th and the 25th and is usually quite dull with only a few meteors per hour.

But this year, some well-known meteor scientists have predicted a short-lived outbreak, where there could be meteors visible at rates of up to 400 meteors per hour.

As exciting as it sounds from the headline -- the true prediction may not be quite as elaborate as you'd hope.

Here's what you need to know about the Alpha Monocerotids and what you really could see in the DMV.

The Alpha Monocerotids and its previous outbursts

The Alpha Monocerotids radiate from near the constellation Monoceros, which is greek for 'Unicorn'. But the parent comet... whose debris and dust passes into our atmosphere, burning up and creating the bright streaks in the sky known as meteors, is not yet definitively known.

On four rare occasions in the last century, there have been spectacular outbreaks: 1925, 1935, 1985, and most recently in 1995. During the last outburst in 1995, it's estimated there were rates of around 400 meteors per hour. This burst of meteors was short-lived, lasting less than an hour. This outbreak was successfully predicted by meteor scientist Peter Jenniskins.

Earlier this month, Jenniskins and fellow meteor scientist Esko Lyyatin predicted that there could be another outburst this upcoming Thursday night, November 21st with rates up to 400 meteors per hour. This outburst is predicted to last only 15 to 40 minutes, centered around 11:50 p.m. EST.

The reason for the prediction is because they believe that the radiant point and conditions for the meteor shower will be very close to that of in 1995.

"There is a good chance to observe a short-lived outburst of the alpha Monocerotids in the morning of the night 2019 November 21–22. Observers are encouraged to watch for possible alpha Monocerotids in the last hours of the night, from 4h15m UT onwards. If an outburst takes place it is likely to be centered around 4h50m UT with a duration of 15 up to 40 minutes maximum."

The Reality: What to expect in the DMV

NASA scientist and meteor shower forecaster Bill Cooke explained this science in a NASA blog Tuesday. Some of his colleagues put together this chart below. Taking this low angle on the horizon into account, if you had clear and dark skies, this is the maximum number of meteors you'd be able to see if the outburst does occur.

Cooke is still skeptic of a meteor shower outburst this brilliant occurring this Thursday evening.

Credit: NASA Blog
This map shows the total number of meteors observers in the United States can expect to see for this year’s alpha Monocerotid meteor shower

RELATED: 'Unicorn’ puppy has tail growing from his forehead

The WUSA 9 Weather Team predicts partly cloudy skies Thursday night. If you do want to try and see this possible outburst of the Alpha Monocerotids, go outside away from all light pollution and city lights and start to adjust your eyes about an hour early, between 10:30 and 11:00 p.m.

Do not look at your smart phone or any other electronics, as you'll ruin your eyes' process of adjusting to the darkness.

The best viewing points will be west of the DC beltway region by at least 30 miles to avoid lights. You'll want to find a field or area where there's no treeline if you look to the east-southeast.

The meteors will be originating to the east-southeast sky about 25 degrees above the bottom of the horizon.

The 22% crescent moon will not rise until around 2 a.m. Friday -- so moonlight will not get in the way.