Flooding, downed trees and lightning cause damage across the DMV

Parts of Prince George's County and Virginia are getting the brunt of the heavy rains and flooding Thursday. 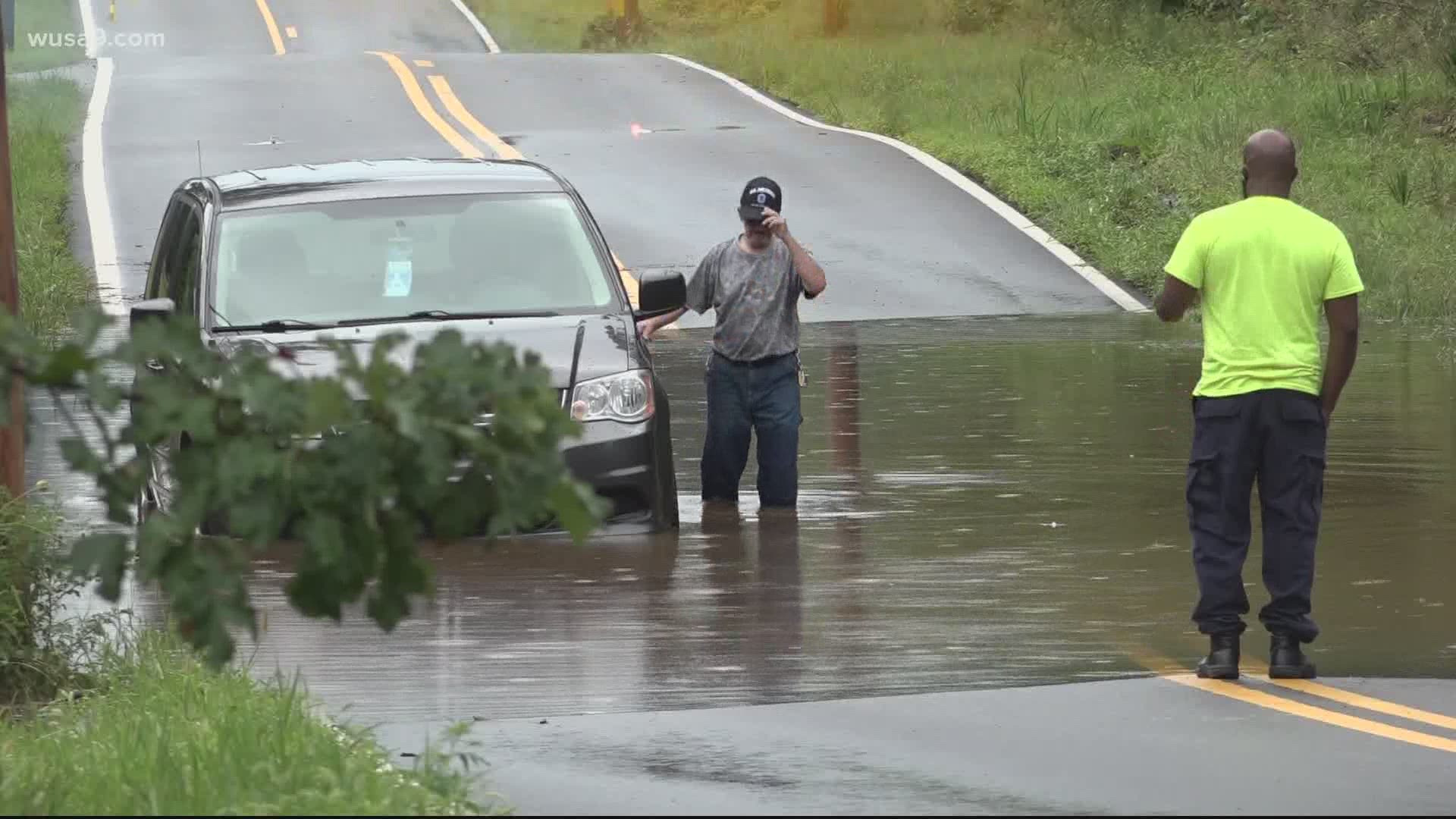 WASHINGTON — Several counties around the DMV are under a Flash Flood Warning Thursday as heavy downpours cause widespread damage and flooding across the region.

WUSA9 crews were at the scene and noticed that one person even tried to jump-start a car but it remained stuck.

PGFD crews are also conducting a water rescue on the 1200 block of Cherry Tree Crossing Road in Brandywine, fire officials said. They rescued two people from a car.

Flooding in the 11900 blk of Birchview Dr. in Clinton. #PGFD crews assisted three occupants out of vehicles. pic.twitter.com/2PabCgheDD

A waterspout, or a "water tornado" was spotted around the Patuxent River area in Maryland just before 7 a.m. Thursday. It was up for only a brief moment, according to social media posts.

RELATED: Yes, a water 'tornado' was spotted near Clinton, Maryland

In Fairfax County, some major roads are closed due to flooding, officials report. Virginia Route 699 Prosperity Avenue between U.S. Route 50 and Virginia Route 236 are shut down as of 9:59 a.m. Woodburn Road near Spice Drive is closed too.

Highwater has also blocked portions of Virginia Route 28 at Nokesville Road between Nokesville and Manassas. Parts of Joplin Road and Artemus Road are closed due to high water.

In Clifton, Virginia, a home caught on fire after being struck by lightning. The fire displaced four residents, all of whom were able to be evacuated without injury. Fairfax Fire officials estimate the total damage of the house to be around $50,000.

Floodwaters were entering into homes in Charles County Thursday morning. The Charles County Sheriff's Department told WUSA9 that a woman woke up with water in her house in the 2105 Boxwood Circle near Bryans Road. Fire crews were called to the scene to assist the homeowner.

A water main break on Bradley Boulevard closed roads from Huntington Parkway and Rayburn Road in Bethesda, impacting 25 families in the area. Road closures remain in place overnight, as repair crews said they are aiming to have the 16-inch water main fixed by Thursday morning. County officials warned it could impact morning commutes.

A large tree fell onto a house on Strathmore House in Montgomery County, causing extensive structural damage and displacing the family, but none of the home's occupants were injured.

RELATED: Flash Flood Warnings now in effect in many parts of the DMV

Update - Strathmore Avenue, large tree onto house, family & all occupants safely evacuated, however they & their pets will be displaced, no injury https://t.co/QkdvHXZ8Br pic.twitter.com/yzpSTHfP80

In Silver Spring, several homes along the Sligo Creek Parkway were struck by lightning, but did not appear to cause any local fires.

Seneca Road between Berryville Road and Esworthy Road was also closed due to a lightning strike dowing trees and wires. 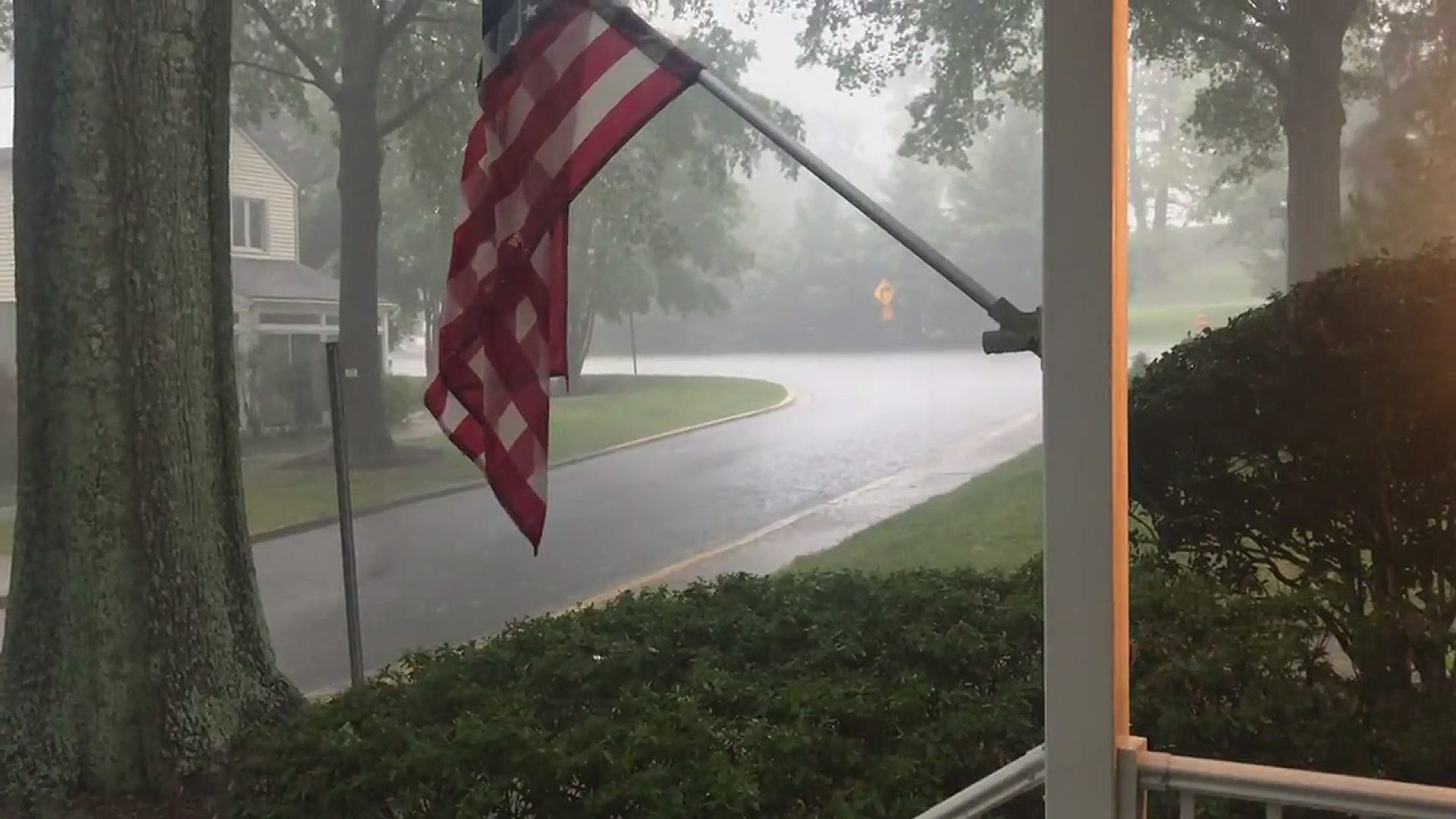 In Loudoun County, the Sheriff's Office warned residents in Leesburg, Broadlands, Lansdowne, Lowes Island, Brambleton, Ashburn and Sterling to be extra cautious, as those regions were particularly prone to flooding.

Several water rescues occurred in Sterling, Virginia, including on Williamsburg Road, where floodwaters were so high, they covered car tires. 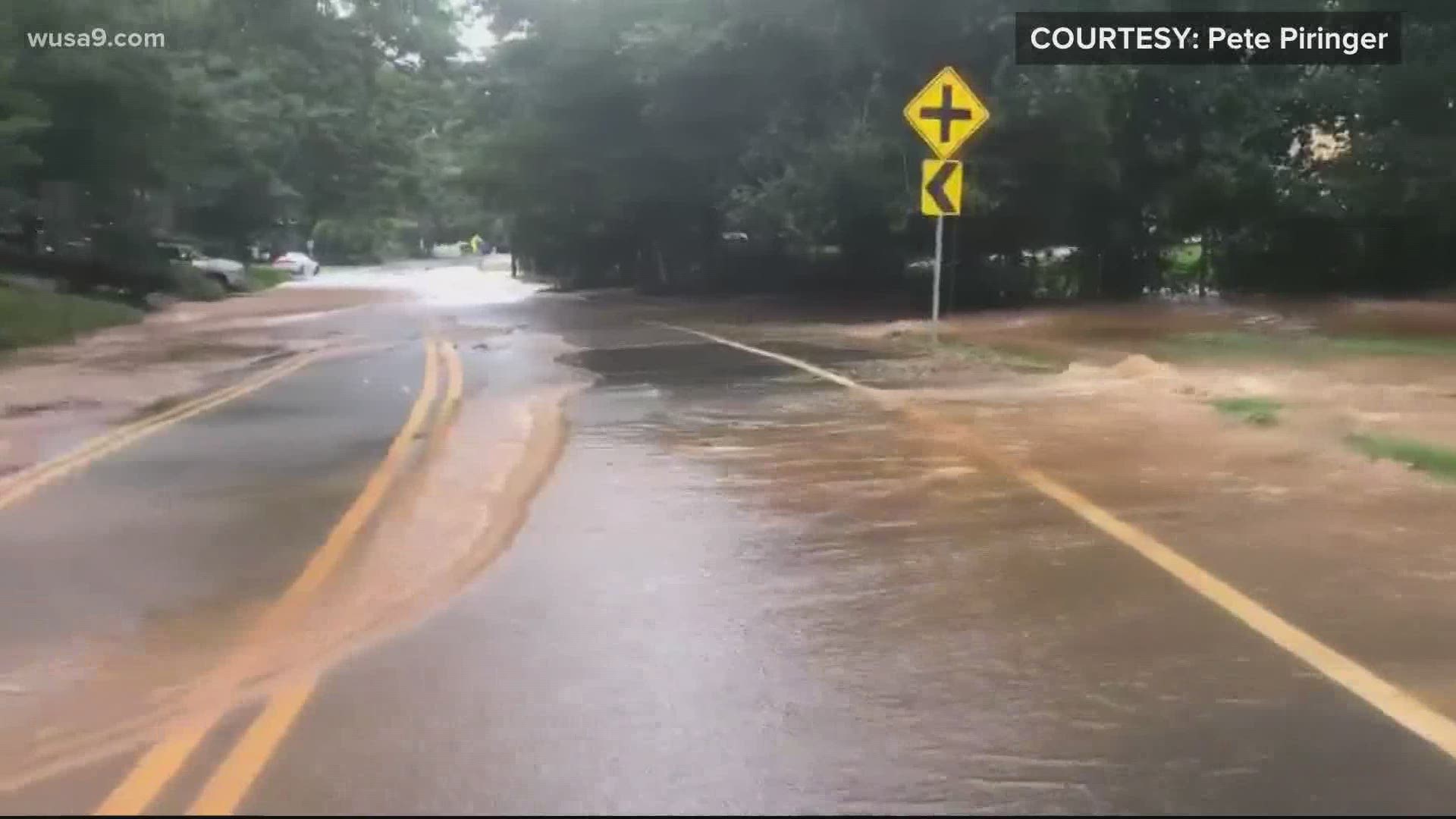 "NEVER attempt to drive thru a flooded road. Just 6" of fast-moving water can knock over & carry off an adult," the Loudoun County Sheriff's Office tweeted. "12" of water can float a small car. If water is moving, it can carry that car away. 18 to 24" of moving water can move most vehicles, including SUVs."

Last week, Leesburg was hit hard, with more than five inches of rain falling in less than three hours, causing multiple roadways to be washed out and water rescues to occur.

Ellicott City, no stranger to dangerous flooding, once again prepared to batten the hatches Wednesday evening, as the new emergency sirens were activated. The historic city recorded around 2-3 inches of rainfall in just a few hours, and residents reported high rivers, flooded roads and washed-out bridges. 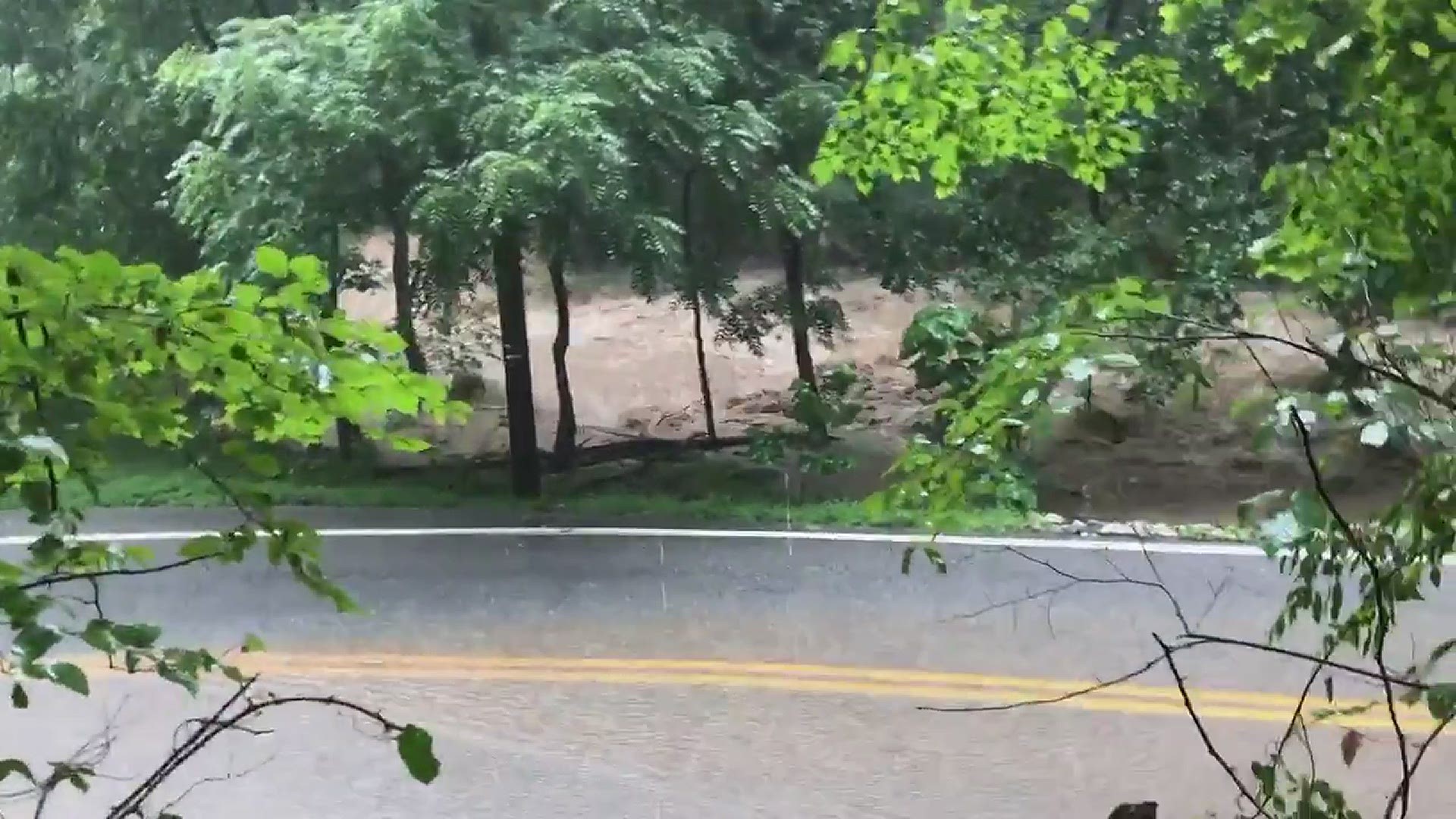 Early Wednesday morning, close to 400 residents in the area of Moseby Drive in Manassas Park were trapped in their community due to a road collapse caused by severe weather, Manassas Park officials said. A double-barrel sinkhole was located at the intersection of Moseby Court and Moseby Drive.

Just after 4 a.m. Wednesday, an officer on patrol in the area noticed a downed tree and flooding on the roadway, police said. The officer later realized that the downed tree was caused by flooding and the road had been compromised. Police said a nearby creek washed the roadway out.

RELATED: Hundreds of residents trapped, roads shut down due to giant sinkhole in Manassas Park

Here is a list of other flood-prone areas across the DMV area:

RELATED: Here are the areas most at risk for flooding in the DMV