St. Mary's County was hit hard by Isaias, and one person was killed after a tree fell on a moving car on Charlotte Hall Road off Route 5. 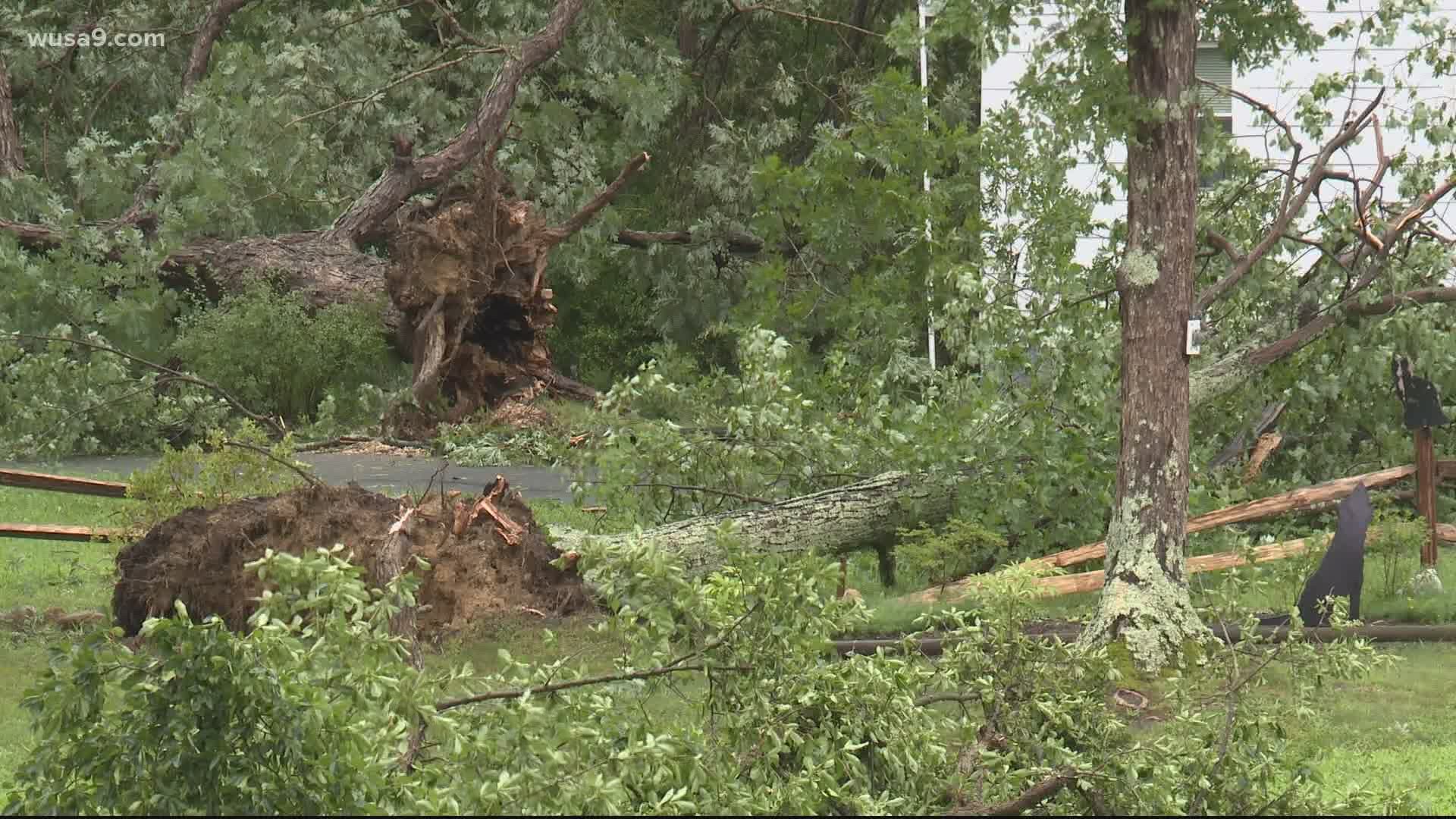 Leonardtown, Maryland has issued a 7-day State of Emergency after a tornado, spotted by an NWS trained weather watcher, caused significant damage to the area.

A professional weather spotter reported the tornado around 6:45 a.m. The tornado touched down on MD 5 next to Winter Sheet Metal south of Leonardtown, with winds around 70 mph.

Photos from the scene showed fire crews on the scene where trees were damaged and knocked down by the high winds. The tornado also caused damage to a house, the National Weather Service reported.

There were no reports of injuries due to the tornado.

If you are in the path of a tornado or tornado warning, take cover immediately and get to low ground.

Credit: @SOMDWxNews/Twitter
Here's a look at some damage caused by a tornado that touched down in Leonardtown, Maryland, Tuesday morning.

WUSA9's Jess Arnold spoke with the owner of an RV camper, Evelyn Bean, who said her camper flipped three times after a tornado hit her house in St. Mary's County.

Just spoke with Evelyn Bean, who owns this camper. She watched it flip 3 times when a tornado hit her home in St. Mary’s County! @wusa9 #WUSA9Weather #Isaias pic.twitter.com/KTMI7BkJOM

The St. Mary's County Sheriff's Department is also investigating a fatal crash where a large tree fell on top of a moving car in Mechanicsville, killing one person trapped inside the car.

Police said the incident happened near Charlotte Hall Road off Route 5, and firefighters were working for almost two hours to clear the road and free the trapped person from the car. 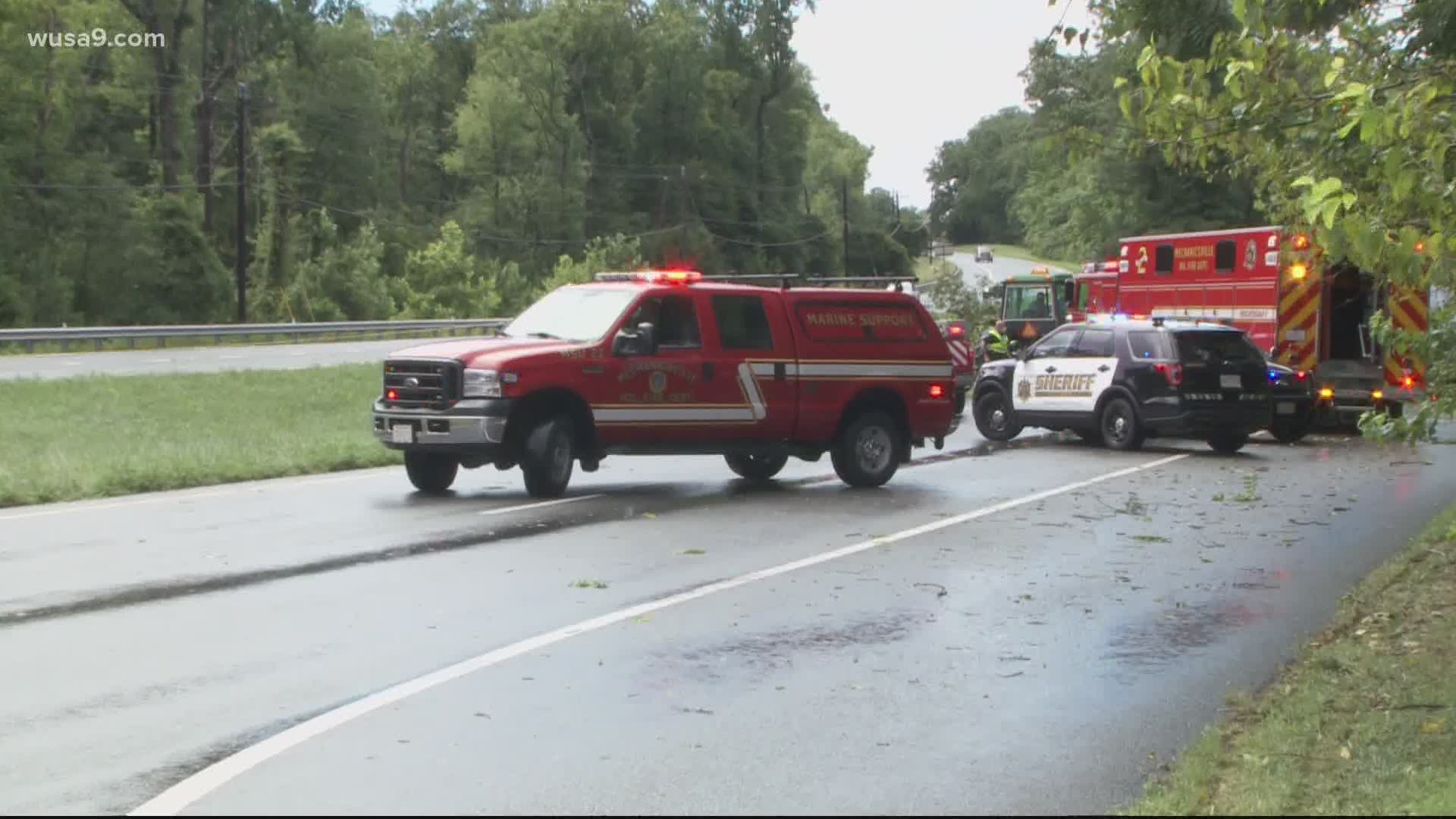 High water, flooding and downed trees shut down multiple other roads including:

Several tornado watches and warnings were issued in the morning hours as Isaias moved through the DMV. Most of those warnings were as a result of radar-indicated tornadoes. The Leonardtown tornado is the first reported tornado that caused damage.

Elsewhere in St. Mary's County, the storm brought an estimated nine inches of rain by 9 a.m.

That rain brought power outages as well as flooded roads.

By 10:30 a.m. an estimated 13,000 customers were without power in St. Mary's and Calvert Counties according to Southern Maryland Electric Cooperative.

A coastal flood warning was in effect for other areas of our region.

Isaias made landfall overnight Monday in North and South Carolina as a Category 1 hurricane. It was downgraded to a tropical storm around 4 a.m. Tuesday morning.

We are tracking #Isaias this morning on #getupdc from Solomons MD ... blurry pic bc we are getting pummeled. @wusa9 #WUSA9Weather pic.twitter.com/fsr1BZ3024